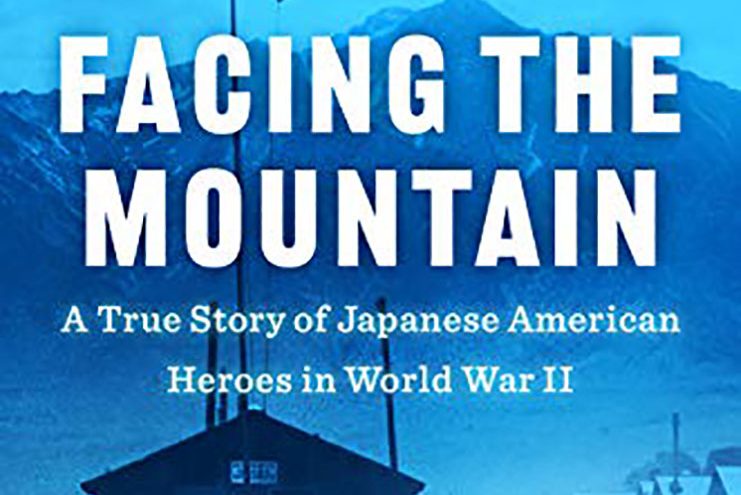 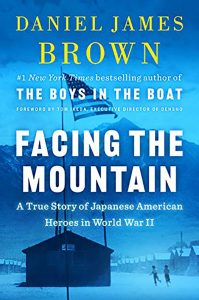 I was entranced from the first paragraph of Facing the Mountain. Daniel James Brown has a way of writing that makes you forget you’re reading and not watching the latest historical cinematic masterpiece. Each character is introduced with such charm and poise it’s hard to believe every grain of detail was pulled from years of interviews and research, carefully sifted into witty dialogue and description.

Facing the Mountain: A True Story of Japanese American Heroes During World War II captures the lives of four Japanese American boys and their families. Kats Miho, a college and ROTC student in Hawaii, Fred Shiosaki, a high schooler working at his parents’ laundry in Spokane, Washington, Rudy Tokiwa, a high schooler working at his parents’ farm in Salinas, California, and Gordon Hirabayashi, a student at the University of Washington. Each family’s path through the war is different, but all are faced with unforgivable racism. Several boys volunteer for the historic 442 Regimental Combat Team, courageously fighting for the country that incarcerated their mothers and sisters and imprisoned their fathers.

Brown is also the author of The Boys on the Boat, a nonfiction novel following the journey of nine American rowers from the University of Washington to the 1936 Olympics in Berlin. His research into UW and WWII Washington State in general adds to his knowledge base for writing about the Japanese American experience. The foreword of Facing the Mountain is written by Tom Ikeda, executive director of Densho, who aided Brown in the interviewing and research process. This unlikely partnership is the perfect combination of experience and talent to create a compelling and historically accurate story that brings to light the injustice faced by Japanese Americans.

The book jumps from each perspective of the four main characters quite frequently. I found it easy to follow along but forgot at times which character was in which camp, and so on. However, Brown does an excellent job of quickly providing the context needed to continue reading without confusion. Although written in third person, each character has a distinctive voice that carries through his section and adds to his personality.

I was particularly interested in Gordon Hirabayashi’s story. We are introduced to him as he is walking home from the UW library before the 8:00 PM curfew. He has a moment of realization, thinking there is no constitutional reason that he should have to leave the library earlier than his friends just because he is Japanese. So he turns around and goes back to the library. This turns into a series of law-defying decisions, including refusing to evacuate to an internment camp. I like that this story is placed side by side with the stories of the boys going to war because this act of defiance is also extremely brave. It is also strange to think about a University of Wasington student, something so natural and familiar in the Puget Sound area, being forced to leave their education and fight for their right to due process of law in this country.

Although I consider myself to be relatively well-versed in the Japanese American experience, I still learned quite a bit from reading this book. I’d recommend it to anyone looking for an informative and engaging reading experience.

The national launch of Facing the Mountain: A True Story of Japanese American Heroes During World War II will take place May 11 at 5:00 PM hosted virtually by Densho. This event will feature author Daniel James Brown and Densho executive director Tom Ikeda. Register for the event here: https://densho.org/mountain/

Densho and the Elliott Bay Book Company will be hosting a virtual Seattle launch May 17 at 6:00 PM featuring Daniel James Brown, Tom Ikeda and Lori Matsuwaka. Register for the event here:  https://www.eventbrite.com/e/149199635125