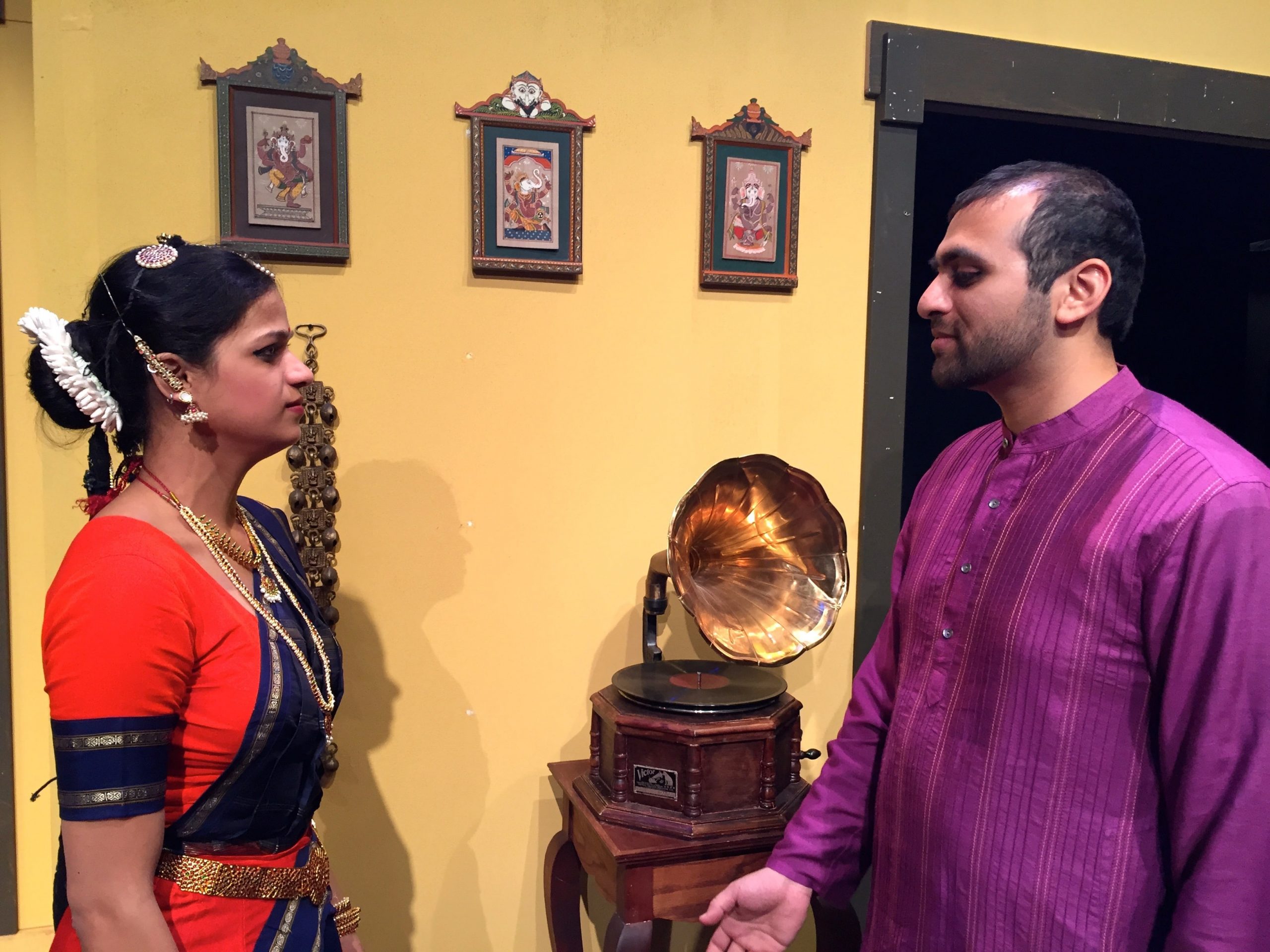 Following their participation in ACT’s Central Heating Lab project in 2011, with Tania Hossain’s Mother in Another Language, Pratidhwani Drama Wing director Agastya Kohli considered that experience so positive that he felt the two organizations would work well together on a co-presentation.

“I kept coming back to the idea of producing Dance Like a Man in an intimate space like Bullitt Theatre,” Kohli said. “Fortunately for us, ACT was glad to have us back too.”

This particular play presents a special opportunity for Pratidhwani and for the artists involved. “Pratidhwani started as a collection of different ‘wings,’—Dance, Music and Drama,” Kohli said. “We have always been looking for projects where the wings could collaborate, and a number of years ago, we discovered Dance Like a Man as a potential show where our Drama and Dance wings could come together.”

This is proving inspiring for the performers, as well. “I am a dancer, a dancer trained in Bharatanatyam (the dance form depicted in Dance Like a Man) for close to 16 years,” said Tanvee Kale, who plays the daughter Lata and the younger version of Ratna, “and who then gave up training after that because of the career line I chose.”

Her role allows her to return to these roots. “It never occurred to me to think of ‘dancing’ as a career,” Kale said. “So when I heard about Dance Like a Man and realized it plays around with characters whose lifeline and whose career is dancing, it naturally attracted me to want to be a part of it.”

This production allows Kale to explore what could have been an alternate life: “I am very happy and satisfied with the way my life has turned out now when I chose Software Engineering as a career path over dance,” she said, “but I do wonder at times, how different and what would my life have been had I chosen to dance for a living.”

Performer Meenakshi Rishi has also learned a lot about the world of dance in her role as the elder version of the mother, Ratna. “My character is complex and, at every rehearsal, I discover a new reason for why she says what she says,” Rishi said. “She is talented, but was unable to launch her own career without the help of the men in her life.”

But gender relations are not the only challenge for Ratna, as generational issues also arise. “She sacrifices everything to her career, but a family tragedy makes her refocus her energies on her daughter,” Rishi said. “One sees an almost ‘Svengali’-like obsession in Ratna as she manipulates to control her daughter.”

And yet Ratna presents many faces. “Although she maintains a very traditional household, doing all the housework, she still makes the important decisions regarding her daughter’s dance career,” Rishi said. “Someone recently described her as a ‘Dance Mom,’ and I would go further and describe her as dance-obsessed who does not hesitate to use any person—be it her own husband—to further her own ambitions.”

Through rehearsal, Rishi has found multiple layers and more complicated motivations in this mother figure. “As I repeatedly play her, I think that maybe she is not a Svengali,” Rishi said. “Maybe she is just a fractured person who is trying to validate herself as dancer and mother!”

Adding to these familial complications are the dual settings in which the story is revealed, which drew actor Abhijeet Rane, who plays the roles of father Jairaj as well as Amritlal, to this play. “The play is set in two different time periods, both of which were periods of upheaval in India but in different ways,” he said. “The political freedom that followed after gaining independence in 1947 was followed by a long period of cultural awakening as the country tried to find its identity.”

This cultural flowering often led to generational conflicts. “India’s political freedom was gained through the efforts of people who had been in many ways steeped in British culture and the youth of the time took on the challenge of reviving India’s cultural traditions,” Rane said. “With no encumbrances, they defined India’s culture in their own right, often causing conflict with the older generation. In some ways, this is the story of every country, as such upheaval could be compared to the turbulent 1960s in the U.S.”

Amidst these political turmoils are the individuals who live and survive them. “Exploring relationships between the characters in this play gives us a chance to reflect on our own relationships,” director Kohli said. “Couples love each other. At the same time, sometimes, can’t help but hurt each other. We have ambitions, as do our partners. At times the two are mutually exclusive.”

“During our rehearsals, we’ve been having some great conversations regarding such conflicts and friction: Why do people stay together? When do they leave?” Kohli said. “Like any well-written play, Dance Like a Man has many layers, and constantly discovering new moments, diving even deeper into those layers, is a thrilling experience.”

Kohli emphasized that the passionate dance elements of this play don’t overshadow its dramatic punch. “It is a gut-wrenching, tear-jerker of a drama, that gets set up for the audience in the first act as a light, funny play—almost a sitcom,” he said. “And you never see what’s coming.”

Dance Like a Man runs from July 24 to August 9 at ACT Theatre, 700 Union Street, Seattle. For tickets and more information, visit www.acttheatre.org/Tickets/OnStage/DanceLikeaMan.

Erika Lee demonstrates that xenophobia is an American tradition in its own right, not an exception to America’s immigration tradition