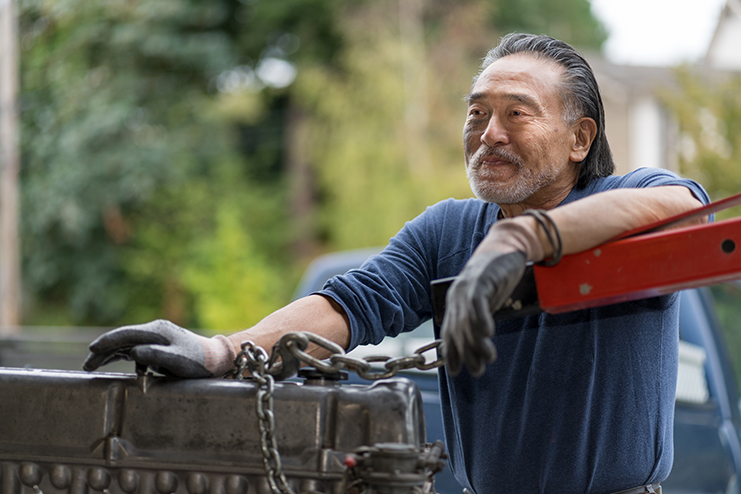 These days, you’re more likely to find veteran labor activist Michael Woo, 2021 Community Voices Award winner, in the garage of his Seward Park home restoring an old Datsun Z car than out on the streets at a protest.

“I enjoy it,” he said. “It’s a challenge. It’s relaxing. It’s educational. And there’s the pride of doing it yourself.”

Michael retired in December 2019, after 15 years as a pipefitter and over three decades as a union organizer. After retirement, he helped start Got Green, a South Seattle non-profit fighting to connect low-income communities of color with jobs in the Green Movement. In recent years, he has quietly stepped away from that and other formal commitments.

That doesn’t mean he’s silent or that young people don’t still turn to him for advice or inspiration.

“Michael’s mentorship has meant the world to me,” said Andra Kranzler, former Columbia Legal Services attorney. From 2011 to 2014, they worked together to bring about “priority hire” for unemployed construction workers living in economically distressed neighborhoods. This approach is now embraced by King County, the Port of Seattle and the City of Seattle.

Derek Ishihara was just a junior at O’Dea High School when he got to partner with Michael. Derek participated in a summer project which led to the founding of Got Green. “He was one of my first role models and mentors,” Ishihara said. “What stands out most is how selfless he is. Everything is for the community. He brings out the voices of people who don’t necessarily have a voice. He’s just a great man.”

I first met Michael in 1975. At the time, he worked for the United Construction Workers Association (UCWA), which had just shut down a federal construction project on Rainier Avenue South. The group, backed by a federal court ruling under Title VII of the 1964 Civil Rights Act, demanded that unions open up jobs and apprenticeships to minorities and women. These efforts led to the integration of the construction industry in Seattle.

How did a Chinese American become a front-line organizer for an African American organization?

Woo, like me, had Chinatown roots. His mother worked at the Tuck Shing Trading Company on South King Street; his father ran gambling establishments. My mother worked at Seattle Glove Company on Weller Street; my father waited on tables at the old Hong Kong Restaurant. But I hailed from Beacon Hill. Woo grew in the Central District, near 23rd and Alder Street, across the street from Garfield High School.

In 1975, we worked shoulder to shoulder moving heavy railroad ties and shoveling gravel to build the hillside community garden. In 1978, we crossed paths as fellow fire watch volunteers during the Milwaukee Hotel housing crisis.

But we took different career paths.

After attending the University of Washington for a few quarters, Michael dropped out and worked in a variety of odd jobs. Newly married and a young father, he sought a new opportunity through Employment Security. He was directed to UCWA.

“I started going to their meetings and volunteering,” Woo said. “This led to lifelong friendships. I got to know Tyree Scott, the founder. He had just come out of the military, after serving in Vietnam. His dad ran an electrician business in the Central District.”

Scott hired Woo as an organizer in 1972. “Tyree told me, ‘This isn’t just a black issue. Look at the industry. They’re all white men.’”

Woo also found work at a New England Fish Company cannery in Uganik Bay, Alaska. There he met and befriended Nemesio and Silme Domingo, two young Filipino Americans, also from Seattle. Nemesio worked a waiter in the mess. Silme was a slimer. Woo was an egg puller. They began exploring how to find a way out of the undesirable positions. Since the dawn of the salmon canning industry a century ago, non-white crews were relegated to the lowest paying warehouse jobs, and forced into segregated bunkhouses and dining halls.

Woo suggested following the UCWA strategy of pursuing legal recourse through Title VII. Returning to Seattle, they and a small group of Asian American and Native American workers formed the Alaska Cannery Workers Association (ACWA). Through family connections, Woo helped secure an office in Chinatown on Eighth Avenue South, across the street from the Four Seas Restaurant.

In 1973, the ACWA filed three class action race discrimination lawsuits against the largest cannery companies in Alaska on behalf of Asian American and Native American workers. Woo was a plaintiff in the successful case against the New England Fish Company.

Over the next two decades, I continued to see a lot of Michael as the lawsuits wound slowly through the courts. The ACWA was publisher of the International Examiner, where I spent my early career as a journalist. The office was an organizing hub for social change activists. Michael was there for meetings along with other young people advocating for affordable low-income housing and bilingual services in the neighborhood. I often saw Michael quietly offer thoughtful strategies and upbeat words of encouragement. Invariably, others listened.

“Michael believes in authenticity,” Marie Kurose, his wife, explained. “He’s principled. That’s what makes him so effective. There’s not a line between the professional and the personal. He believes the solutions are in the community. He can work so well with everyone, across race, gender, age and background.”

Today, decades later, Michael is just as ebullient about supporting social justice as he was in the old days. But he doesn’t do the meetings anymore. He’d rather spend time with family and dear friends.

“Just like every other organizer in my era, we had a hard time keeping a balance between community organizing work and our personal life,” Woo said. “I had a broken marriage. This stuff pushes you to burnout. I tell young folks, ‘Don’t get burnt out.’ I’m restoring a car. It’s so different from my earlier life. It’s saved my current marriage. It’s kept me in the garage.”

Kurose said Michael often visits with Stan Lock, one of his closest buddies, and Harley Bird, a veteran UCWA activist.

Kurose’s favorite is the oxtail stew, which Michael learned to make from his father, an excellent cook. Anticipating his 72nd birthday on October 4, Marie asked Michael to make the stew for dinner.

Is Michael going to make it? “Of course,” he said, laughing. “I’ll call you. Come on over.”

Michael Woo will be awarded at the IE’s annual Community Voice Awards to be held online on Wednesday, Oct. 27 at 6 PM. See other awardees and purchase tickets.