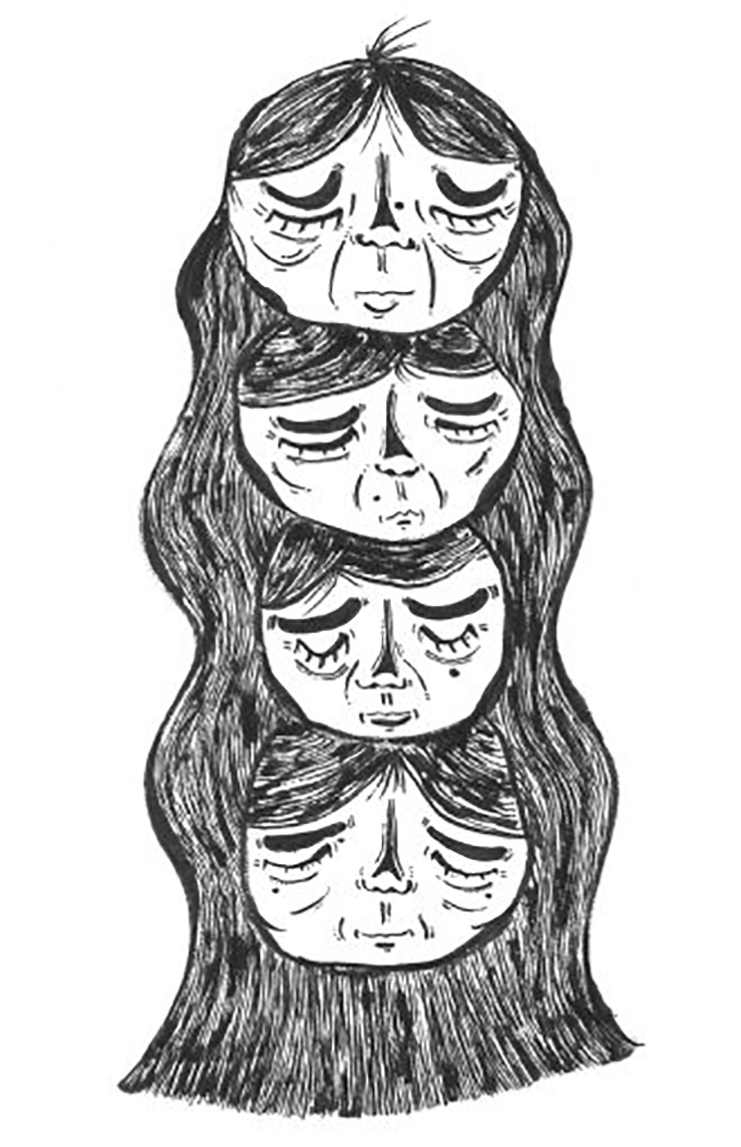 Given the ravages of colonialism and war, coupled with their status as essential workers in service industries, Filipinos are known world-wide as a mobile, diasporic population. In the Philippines, there are two types of Filipinas as depicted in the painting of Pacita Abad, “Maria Clara and the Negrita.” In the U.S., Filipino Americans are split into pre-1965 mainly U.S. citizens for generations and post-1965 Philippine expatriate immigrants. They share a culture described as 350 years in a nunnery (Spanish colonization) and 50 years in Hollywood (American colonization).

This exhibit highlights the intersection of grief related to displacement/migration and cultural identity. From colored pencil and pen to typed words, five local Filipinx Americans (both U.S. born and immigrants) celebrate and honor the transformation of grief to a resting place, a pause, before moving forward. Several themes are woven in this exhibit by Derek Orbison Dizon who is a grief counselor by profession, as well as an artist.

Loyalty to the extended and multigenerational family over time and space are depicted in four of the five artists’ works by addressing their mothers or grandmothers/lolas.  There is a mix of ancestral traditions and Western ones. English and various Filipino languages/dialect are used. Family photographs and portraits are prominent followed by country scenes and material possessions.

The artists are asked what grief means to them. For Raychelle Duazon, in her poster,”Tahimik” (meaning “silent”), grief is permission to sit in sadness over heartaches and loss. Imee Punjimula framed a Balikbayan box with memories of the past and of loss, such as letters. Her paintings of the Philippine countryside express, “Grief was in the way. I had forgotten the way the rice fields glistened more precious than gold.” “Siklod ku pu Lola,” by Ryan Diaz has six photos of his grandmother surrounded by a typed litany of “Bless me, Lola” including, “Bless me, Lola for I’ll never know how much you love me.”

He states, “Grief is like a fork in the road, no map for getting lost…If I should ever grieve, hope it brings me closer to living/dead, lost/found.” Seattle born and raised graphic designer Ronal Antonio reminds us of local and national leaders who have died, some martyred, in his portraits. He says, “Grief felt devoid of sunlight…a powerful phenomenon occurring as we respond to absence.”

Derek Dizon’s work is arranged as a mantel or an altar/shrine. Of seven framed pieces, the largest one is in the center of the mantel in memory of his murdered mom, Phoebe Orbiso Dizon. He writes poetically, ”Mama, I Still Feel Your Shine.” “My mother is an ocean I have never known how to swim.” He speaks of ‘kapua’, a shared sense of self and interconnectedness. He also says, “How can I rebuild a home I have always been expected to leave.”

In 1995, Phoebe Orbiso Dizon was shot to death in the King County Courthouse as she was protecting her friend, Susana Remerata Blackwell, a domestic violence victim, at her divorce proceedings. Also killed by Susana’s husband, Tim, were Susana, her unborn child and Veronica Laureta. Derek, Phoebe’s youngest son, was five years old. Since then, he holds the memory and legacy of his and the other mothers in various ways. One was creating a 2019 film (still a work in progress), “Remembering Our Mothers,” to understand what this history means for survivors, anti-violence organizers, and healers in the community. Another is his work at API Chaya a non-profit organization whose mission is to empower survivors of gender-based violence and human trafficking to gain safety, connection, and wellness.

Resting Place is his most recent expression of creating a world where all people can heal and thrive. This exhibit reminds us that resting places over time and space can be both fleeting and final, healing and restorative to the rest of our journeys.

Resting Place is curated by Derek Orbiso Dizon and is at Columbia City Gallery, Oct 9 – Nov. 8, 2020.