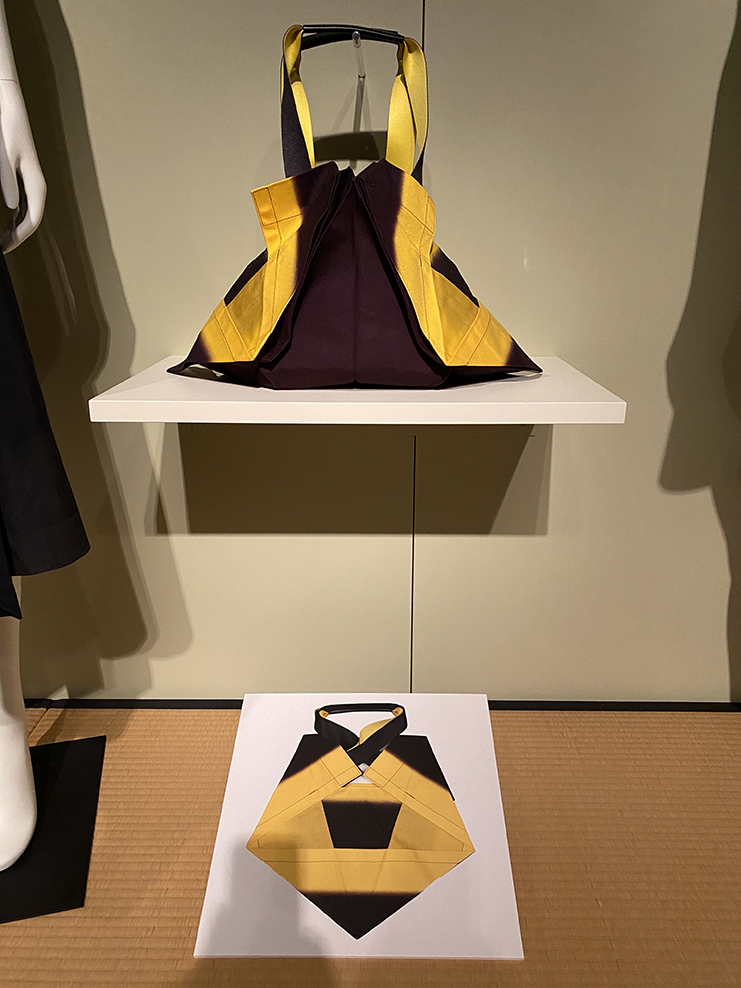 Everyone who has folded a sheet of paper into an airplane has felt the satisfaction of turning something flat into a functional three-dimensional object. The Japanese are masters of transformation through folding. Origami (paper-folding) is perhaps the best-known form outside of Japan, but their fine art and everyday life are full of examples of folded objects. Folding Into Shape: Japanese Design and Crafts at the Seattle Art Museum is a small tightly-focused show of some 30 folded objects encompassing three centuries and a variety of materials.

Cloth is an obvious material to fold. Some of the oldest objects in the show are kimono and obi, the traditional robe and sash. Constructed of simple rectangles, they can lie or hang flat. When worn, the obi is used to drape and sculpt the kimono to conceal and reveal the body. Using the rectangular surfaces as a canvas, Japanese artisans have developed some of the most aesthetically and technically sophisticated textile designs in the world. Three 19th– and 20th-century kimonos decorated with traditional weaving, dyeing and embroidery hang alongside contemporary dresses and cloth pieces that employ the same techniques.

One of the most intriguing textile works is the “Origami Handbag” by Issey Miyake. A fashion designer known for his artfully pleated clothing, Miyake merges digital technology and tradition, using computer programs to design 3D garments from flat cloth and plot the most efficient way to cut out the pattern pieces using the minimum amount of fabric. The complex geometry of the handbag was designed and constructed in this way; the finished bag can again be folded flat, its shape resembling the front of a kimono. One wishes for a video showing the unfolding and re-folding process.

Two ceramic pieces fool the eye in different ways. “Bundle” by Tanaka Yu is displayed next to a 100-year-old furoshiki, a square cloth used to wrap and carry things. The bright yellow “Bundle” mimics the soft folds of a furoshiki but is, in fact, solid stoneware. Miyashita Zenji’s “From Afar” is a ceramic vessel decorated with a landscape of mountain ranges. The graduated colors of the layered glazes create an illusion of depth: the shallow rhomboid vessel looks, at first glance, like a square cube, the mountains on its surface seem to recede into the distance.

While strips of bamboo are technically flat, weaving them into baskets stretches the definition of folding. However, this does allow for the inclusion of several magnificent examples of Japanese basketry. Yufu Shohaku combines different thicknesses and bundles of bamboo in the free form weaving of his asymmetrical “Flower basket with handle.” It offers a sharp contrast to Kogakusai’s ethereal “Flower basket” whose undulating translucent shape is constructed of uniformly thin strips. The dozen-plus baskets in the show are 20th century vessels for ikebana flower-arrangements.

The Seattle Art Museum’s collection of Japanese art is so vast that only a fraction is on display on any given day. But the depth of its holdings allowed curator Xiaojin Wu to create this little gem of a show. Taking the concept of containment and the technique of folding and selecting objects that represent different artists’ responses to those ideas, she has shown how cultural influences flow across media and over time.

Folding Into Shape: Japanese Design and Crafts is on view at the downtown Seattle Art Museum through September 25. Information at 206-654-3100 or https://www.seattleartmuseum.org.