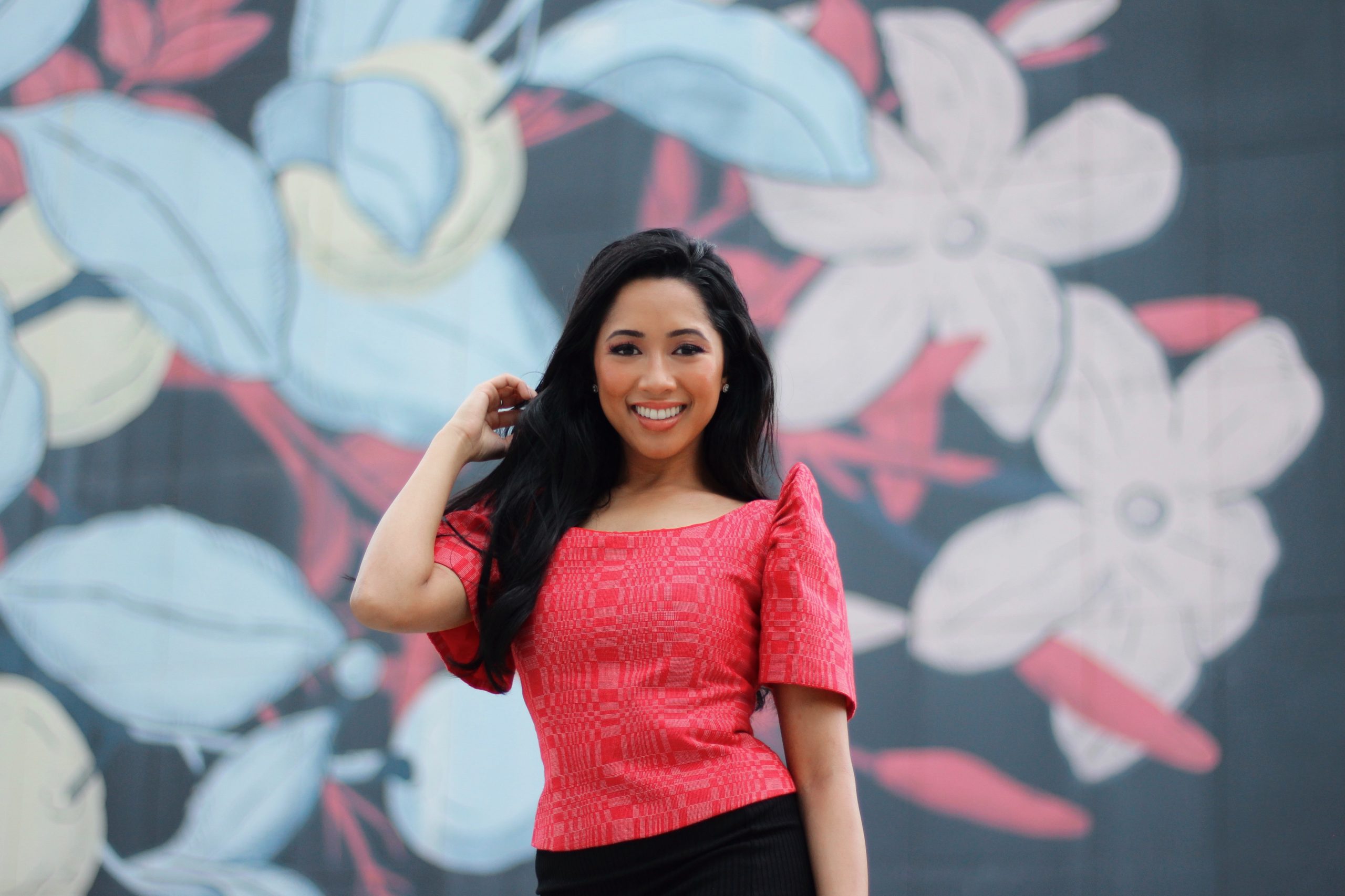 Starla Sampaco knew at age eight that she wanted to be on television after watching Rudi Bakhtiar on CNN Headline News with her parents.

“After looking at the TV that one day, I was like, I’m gonna do that one day. And I just stayed on that path ever since,” Sampaco said.

Sampaco is a news anchor and host of “Crosscut Now” on KCTS 9, founder of Career Survival Guide and adjunct professor at the University of Washington teaching graduate students in the Department of Communication.

Sampaco will be honored with the Tatsuo Nakata Leadership Award at the International Examiner’s annual Community Voice Awards fundraiser on Thursday, October 27 at Joyale Seafood Restaurant. The award is named for the legacy of Tatsuo Nakata, a community leader and former senior legislative aide and chief of staff for Seattle City Councilmember David Della, who tragically passed away in 2006 at the age of 29.

The Tatsuo Nakata Leadership Award is given to young and aspiring leaders in the Seattle community who demonstrate the same tenacity and leadership building as the award’s namesake.

The IE Board of Directors awarded Sampaco for her dedication to motivate young people and train the next generation of journalists as an adjunct professor at UW and as the founder of Career Survival Guide, and for her exemplary work as an Asian American journalist and news anchor.

“It’s such an honor to follow in the footsteps of the person who the award is named after,” Sampaco said. “I just hope that I can continue to do this work and to keep giving back to our community because the Asian American community of Seattle has really been there for me in some really tough times.”

Sampaco’s parents are from Mindanao, Philippines, but she was born here in the U.S. and grew up in Bellevue, Washington.

“Being the child of immigrants, it’s definitely a different kind of upbringing,” Sampaco said. “You learn a lot about what it really takes to get here to America and you just end up with so much gratitude for this as well.”

Her parents were supportive of her dream to pursue a career in journalism and she said this made her want to be the best she could in the journalism industry.

“Growing up, I didn’t see a lot of people who looked like me on TV,” Sampaco said. “When you’re a young child, you’re really impressionable, and [when] mainstream media features people who don’t look like you and you don’t see yourself in on-camera roles or in positions of success, you start to internalize those biases. You start to think, if people like me can’t make it to these roles, maybe there’s something wrong with me, or maybe I’m not cut out for this.”

She said there was a part of her that doubted she’d be able to make it when she was a child but other Asian American women journalists like Lori Matsukawa inspired her to push forward.

“Those were the women that paved the way for me and also inspired me to think if she can do it, I can do it.,” Sampaco said. “Part of my motivation for trying to get on camera was because I wanted to do that representation for other young Asian American girls, or young women of color. So to have made it full circle and to now be on the other side of the camera where I’m on TV, I just hope that if there’s a little kid and the TV is on and I’m on screen and she can relate to me, hopefully she’ll think, okay, if Starla can do it, then I can do it.”

In high school, Sampaco started a youth media show called ‘What’s good 206?’ featuring positive news coming out of Seattle, that aired on a public access channel. She said this is where she got exposed to the journalism world through interviewing people like the Seahawk’s Richard Sherman and one of the former Seattle mayors.

“It just confirmed what I already knew, which is that I was meant to work in media,” Sampaco said.

Sampaco said this exposure to the journalism world set her up for success later in her media career.

“I watched some of my old clips, and I kind of cringe a little bit because they were my very first experiences in front of the camera. You have to you have to start somewhere, but I look back and I just think wow, I really put myself out there and I let myself make all these mistakes and really learn and soak everything in like a sponge.

She encourages students or anyone interested in news to look for opportunities outside of the classroom for that experience.

From there, Sampaco attended the University of Washington double majoring in Journalism and Law, Society and Justice. She did four internships in her senior year of college.

Sampaco worked for King 5 News as an intern for “Evening Magazine” and Digital News Desk. At KIRO 7 News, she was a digital media intern before interning at Olympia, Washington, as the host of “Capitol Headlines” for TVW where she covered state legislation.

After graduation, two TV news stations offered Sampaco jobs that paid $27,000 and $34,000 a year. Both were considered good options by Sampaco’s mentors and professors, but they were not offers in Seattle and Sampaco was not comfortable with the amount.

“The reality is so many people who are able to take those jobs and get that experience are people who have families that can help support them financially,” Sampaco said. “When we think about what that does to the demographics of the people who join the industry, it could be more inclusive.”

She said that despite her mentors pressuring her to take the job offers, she wanted to start her career in a big city like Seattle and serve her hometown as a journalist.

“A lot of people told me it was a bad idea. They said you really do need to start in a smaller market in a small town and then work your way up. If you want to be on camera in Seattle, you know, you’ll probably make it definitely, you know, by your 40s, maybe your 30s. But I’m still in my 20s and I was able to make it on air.”

Sampaco said to take people’s advice, but to advocate for yourself.

“Even the experts can be wrong sometimes, because they’re only experts based on what has happened before. They’re not experts on you. They don’t know what kind of hustle you have,” Sampaco said. “They don’t know what kind of opportunities you’ll have access to and make for yourself. And just because something hasn’t been done before, it doesn’t mean that it’s impossible.”

Sampaco denied these jobs offers and instead developed GeekWire’s TLDR, their first video news show where she was a one woman band writing, shooting and editing videos for the company’s website and social platforms.

“I pitched myself to the company and said, I really want to work here after graduation. Here are my skills and clips, and they ended up giving me a job several months later,” Sampaco said.

She was exposed to all parts of the production process and involved in audience engagement.

“I was writing scripts, on camera, video editing, producing,” Sampaco said. “I just kind of threw myself into a job where I knew I’d have to wear many hats because that was really the best way to get the experience that I didn’t have yet.”

Sampaco’s favorite story she’s done throughout her career was a series of interviews that featured foreign born or immigrant entrepreneurs in Seattle.

“One of the reasons why I was so proud of that series was because I was really able to showcase the types of talent that we have in the Seattle area and also within communities of color,” Sampaco said.

She said this series related to her on a personal level, despite how much work it took for her to produce as a one-woman band at Geekwire.

“I think when you work on stories that hold a lot of personal meaning to you, it makes the whole process so much more fulfilling,” Sampaco said.

Sampaco encouraged for people interested in pursuing news or journalism to be flexible but to be firm on values.

She said she can accomplish her goals of helping people through Career Survival Guide.

“The first time that I was at KCTS9, it just felt so surreal because I was living my childhood dream,” Sampaco said. “It’s like that moment where your dream is finally coming true and you just kind of have flashbacks of all the moments that got you to that moment. It all led up to that moment where oh, my gosh, I finally made it.”