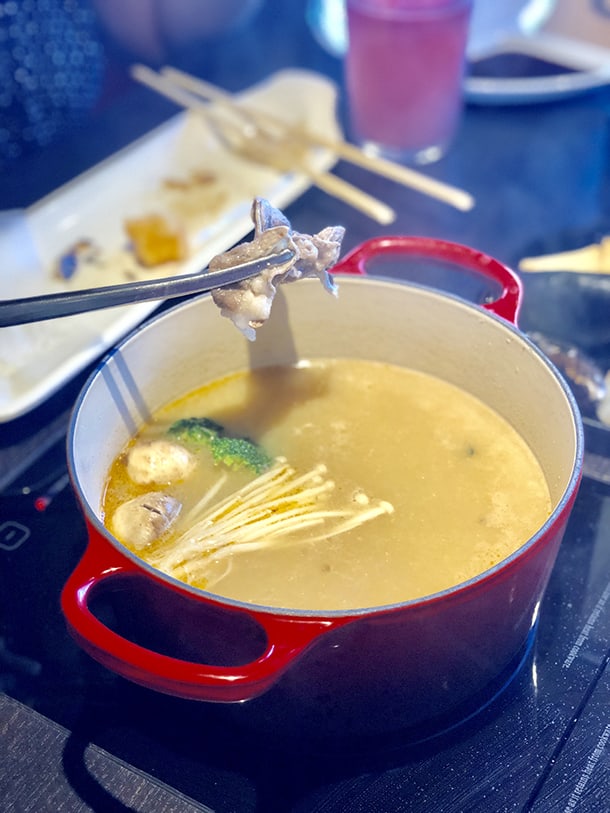 When you’re feeling like splurging on a communal, interactive meal, consider Crab King in Bellevue, which offers a casual, dine-in experience with high-end ingredients. Situated across from Regal 8 Cinemas in the Crossroads complex, Crab King is open for lunch and dinner.

For readers unfamiliar with “shabu shabu,” the Japanese onomatopoeia for “swish, swish” (referring to swirling meat in broth), it describes Japanese-style hot pot. Paper-thin slices of tender meat and vegetables are served raw and cooked tableside like fondue in a large open pot.

Over two lunch visits, I noticed that Asians make up the majority of Crab King clientele – a good sign for those who believe Asian patrons mean better Asian food. It’s also a sign that Westerners are still catching on to the shabu shabu fun. The staff at Crab King embrace their role in educating newcomers. Crab King hospitality is attentive by design, though diners do most of the cooking.

My lunch companion, elite Yelper Mia Cao, made helpful comparisons during the meal to other local hot pot establishments. Stove burners at Crab King cooked the ingredients quickly, faster than other places. She’d recently been to a Thai hot pot spot on Capitol Hill that had eight dipping sauces, whereas Crab King offered two – sesame sauce and black bean sauce poured onto plates that looked like miniature lunch trays, with sections.

Diners have the choice of two broths, house broth and miso spicy. The story of the crab-soaked house broth explains the inspiration of the owners, a Chinese couple who met in the city of Sapporo on Japan’s northern island of Hokkaido. Xiaomeng, a Chinese restauranteur, and Pei Pei Liu, who worked in Japanese restaurants after moving there at age 18, today operate Flying Fish in South Lake Union, as well as Crab King which is not quite two years old. Their third restaurant, with a completely different concept, will open shortly in 2018. Crab King’s influence was a Hokkaido crab house, Kani-Shogun (“Crab King”), whose main course was crab pot. The restaurant concept of both centers around a broth made from steeping crab – a much clearer broth than the cloudy miso spicy.

Mia and I tried both broths and agreed the miso spicy was rather salty for our tastes. That original recipe includes sake, soy sauce, miren (rice vinegar), kombu (thick seaweed), and broth. The house broth was delicious.

The double-sided menu looks like a huge placemat. Its overwhelming layout is not particularly easy to understand, but the restaurant website is helpful. A la carte options are always available, but for the full shabu shabu experience, diners can order customized meat packages.

Da, the restaurant manager, explained, “The lunch special ($9.99-18.99 for one-course-meat hot pot) is designed to fill someone up and still get them in and out within an hour.” Depending on the number of meats ordered, shabu shabu packages run between $35, $49, or $99 per person, including assorted vegetables like tofu, cabbage and enoji mushrooms. The most expensive will buy you a food coma and includes the Alaskan red king crab, usually eaten at dinner, that is the signature of Crab King’s name.

We tried the all-you-can-eat offering of five available meats — sirloin (wagyu top), wagyu (chuck roll), USDA prime tri-tip, premium pork belly, and seafood with assorted vegetables. The ingredients were fresh and of good quality, although the premium pork belly was a little tough that day. On my second visit, the pork belly rolls had more fat and were softer when cooked. I also had the king crab, which came in a pot along with tofu and assorted vegetables. The staff cooks the crab pot for diners, keeping a timer with them and returning in three minutes to remove everything from the broth into bowls.

A collection of beer, wine, sake, and soda is available to pair with your meal, but we tried the fresh-squeezed, barely-there sweet watermelon juice and coconut water, which are available by glass or bottle. The mung bean cake was more like a cold and frozen byte, and the green tea and vanilla ice cream with strawberry compote had a satisfying, gently sweet finish.

There are various table arrangements depending on the size of the dine-in party. Stations with open booths, as well as those separated by hanging tatami screens for privacy, are interspersed along with tables and separate chairs. A few booths have separate, cushioned seats and backs familiar in Japanese establishments. Stations have either one, two, or four stove burners depending on how many people in the party want to cook individual pots, or share one big pot as a family.

Decor is tasteful and simple, with contemporary art in wooden frames, perhaps to match the tatami screens in the main space. As the contemporary radio tunes of James Arthur and X Ambassadors played quietly overhead, I thought to myself, This place is luxurious but not pretentious. And it’s delicious. A nice spot for lunch, but perhaps the perfect, special night out with friends or family. Treat yourself.