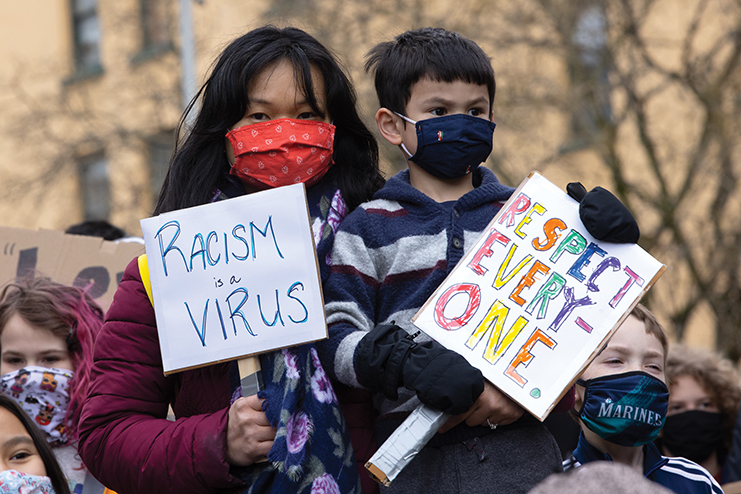 This piece is part of COVID-19 in 2020: A look back on health equity & community resilience in Chinatown-International District. The project was led by Seattle photo-journalist Karen Ducey and former ICHS marketing and communications manager Angela Toda in partnership with International Examiner. The project was funded by Historic South Downtown, King County 4Culture, and Society of Professional Journalists.

As the state’s largest health center serving the Asian Pacific Islander community, ICHS was among the businesses, residents, and organizations in Seattle’s Chinatown-International District caught in anti-Asian sentiment and racial tensions emerging from the pandemic’s early days.

As statewide restrictions at the start of the COVID-19 pandemic further froze social gatherings and businesses, the once bustling sidewalks stood bare and small mom-and-pop stores emptied.

When local protests of racial injustice emerged in June 2020 following the murder of George Floyd by a Minnesota police officer, businesses in the CID were left damaged and vandalized. The community cleaned up and put up plywood to protect storefronts in the neighborhood. In a show of solidarity with the Black Lives Matter movement, the community partnered with local artists to paint murals on the plywood boards with messages to bring attention to racial injustice.

The pandemic also brought on a surge of anti-Asian hate incidents as terms like “kung flu” and “Chinese virus” were used in media and by officials at the highest level of government. From March through December 2020, Stop AAPI Hate reported 2,808 incidents against AAPIs – a figure crowdsourced and likely an undercount. In addition, according to the FBI’s Annual Hate Crime Report, there were 7,134 hate crimes in 2019 – a marked increase from the year before. In Washington state, there were 542 hate crimes – the second highest per capita in the country. Rallies in the CID neighborhood brought diverse communities together and called for an end to anti-Asian hate.

The COVID-19 pandemic has disproportionately affected communities of color, especially Black, Latinx, and Pacific Islander communities. This was evident in ICHS’ patient population with over 85% people of color. ICHS remains committed to improving health outcomes, dismantling barriers that harm our communities, and fighting against xenophobia and racism.

ICHS: COVID-19 vaccines now authorized for young children under the age of 5

Art of darkness: How a faulty brush pen helped me process the pandemic