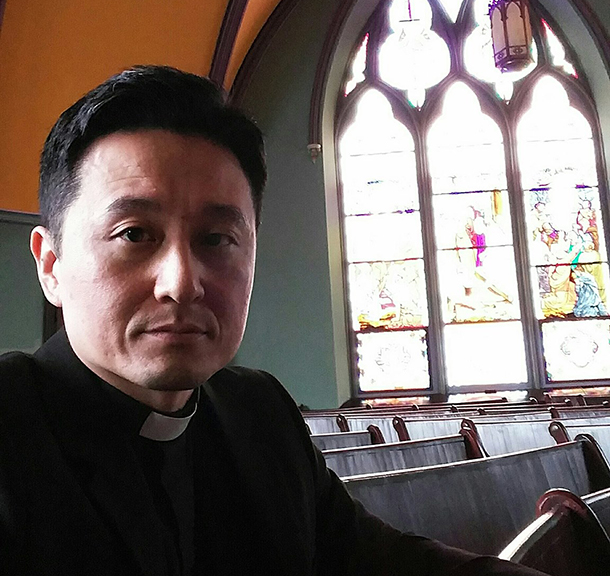 In front of the Federal Building in downtown Williamsport, not far from Little League Boulevard (Williamsport’s claim to fame is for hosting the Little League World Series), a Korean-American pastor cuts an ancient figure of solitary witness that long predates the idea of baseball. Reverend Sam Awun Hwang, 46, who came to the United States at age 12, stands with his IMPEACH TRUMP sign in this Pennsylvania county that is rightly called Trump Country. (Trump beat Clinton in Lycoming County by whopping 70 to 25 percent margin.)

A man passing in his car tells Hwang, “Go back where you came from.”

Hwang answers, “I come from here.”

He wants to ask the man if he calls himself a Christian, but before he can the man speeds away.

Mainly, people sneer. Maybe they don’t know what to say because they are stunned by what they see, intimidated by this shattering of conformity.

The minister of Williamsport’s First Presbyterian Church is short, soft-spoken, reflective,  by his own admission temperamentally unsuited for the role of political radical.

“What we have in America is not just a political but a spiritual crisis. When you build political legitimacy based on disparaging people who are not white, who are immigrants, and when you disparage countries based on the idea of America First, those are spiritual as well as political issues. It defies common sense. As a Christian, what I find just as disturbing as seeing a white supremacist coming out into the open and saying and doing the things we see on TV, are people who call themselves followers of Christ and still manage to overlook the rhetoric and policies that are coming out of this administration.” 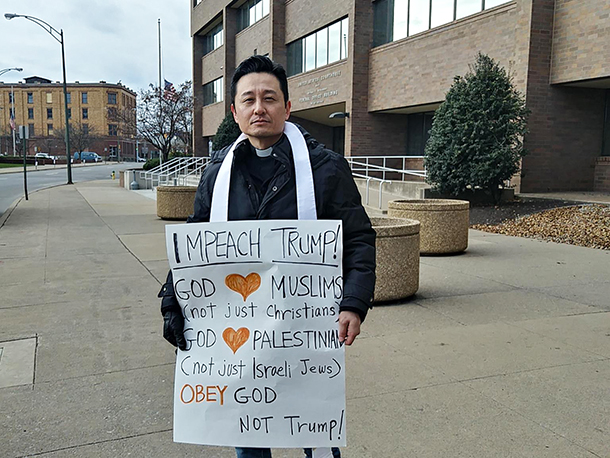 It is estimated that one half of one percent of Williamsport’s population of 30,000 is Asian. Three percent are Hispanic. There is also a very small Muslim population served by the Williamsport  Islamic Centre.

“Williamsport is not a very diverse community.” Hwang smiles. “When my family and I moved here, 2009, people would stop and look at us. They are not used to seeing Asians. There are maybe around fifty Korean families. The Williamsport Medical Center employs Indian and Iranian doctors, and my friend Dr. Rajhoub, a doctor from Syria, who works with Syrian refugees here and in the Middle East.”

When Trump announced his Muslim travel ban, Hwang was so disturbed he immediately organized a protest rally to be held the next day at the Federal Building.  A hundred and fifty people showed up (a large number by Williamsport standards), but so did big trucks driven by Trump supporters. They revved up their engines so loud speakers were often drowned out. The police stood by and made no attempt to get the truckers to move on.

The pastor is inspired by the legacy of Dietrich Bonhoeffer, the German Lutheran minister who called upon Christians to resist Nazism, and who was hanged at the Flossenbürg Concentration Camp in 1945. Hwang’s own activism was born in 2006 with the outbreak of the second Israel-Lebanon war. He was serving as the Associate Pastor of a Korean American church in Buffalo. Until coming to Williamsport, he had served only in Korean-American churches. His dismay at the double silence of the media and his own church over the human suffering caused by the war made the Sunday liturgy seem empty. 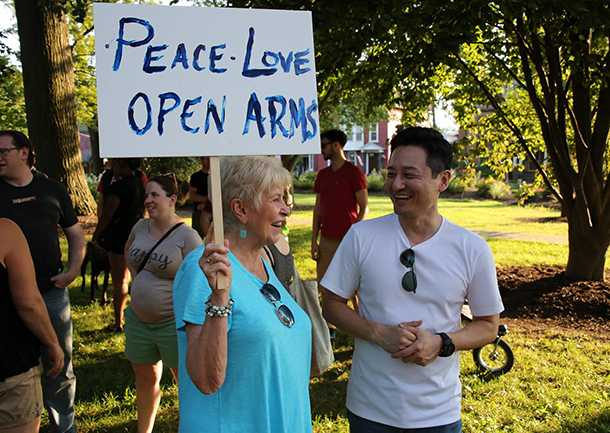 “There would be all of this emphasis on the love of God, and not a single mention of what was taking place hundreds of miles away where people were being killed.”

Though not a firebrand like the Berrigans, Hwang, undeterred by the conservative politics of Christians in his area (few in his own congregation actively support him), ceaselessly tries to move them in a progressive direction. His difficulties extend to the United Churches of Lycoming County, an ecumenical body that advocates for social justice, of which he is vice-president.

“They have been somewhat vocal with regards to DACA and the Muslim travel ban, but it frustrates me that they are not vocal enough. I respect their concerns about maintaining unity among Christians, but for me personally when you are that concerned about unity you cannot be as vocal as you must be in a time of crisis.”

A non-white American as well as a Christian, Hwang was shocked into convening an inter-communal dialogue at his church when white supremacist Dylan Roof blew away nine black churchgoers one night in Charleston.

“It’s a legitimate point,” the pastor concedes. “The white working-class has been neglected. It hasn’t been heard. But it is unfair of them to have disparaging attitudes towards minorities, towards immigrants. It is wrong of them to use these groups as scapegoats.”