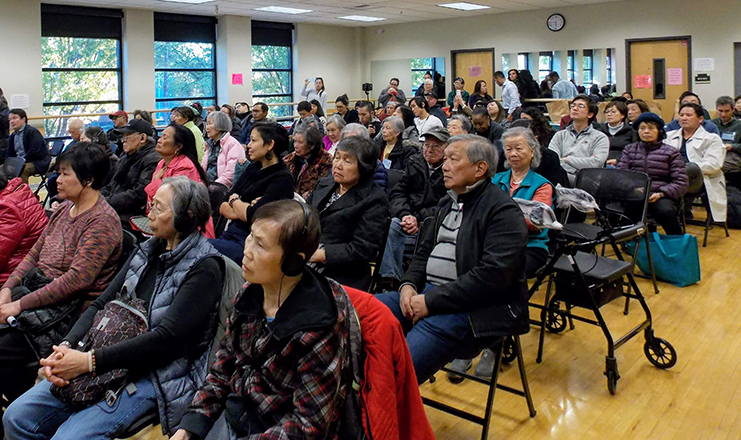 Councilmember Larry Gossett is seeking his 7th King County Council term this election. He has a long history as an activist and community leader in the 1960s and 70s, as a founder of the Black Student Union at the University of Washington (UW). Gossett was also a member of the Gang of Four with Uncle Bob Santos, Robert Maestas, and Bernie Whitebear – a political alliance between the Native, Latino, Asian and African American community. He spoke to tonight’s crowd about passing legislation to form the Immigrant and Refugee Commission. He also prohibited King County Jail from asking country of birth to prevent deportation.

Girmay Zahilay is the son of Ethiopian refugees. He grew up in affordable housing in Rainier Vista and Holly Park, completed undergraduate at Stanford and studied law at the University of Pennsylvania. Zahilay highlights the disparities within King County, focusing on the struggle of the city’s working class people and families to stay in Seattle and in their communities. His policies focus on building affordable housing, improving public transportation, reforming the criminal justice system and demanding climate action.

The Port of Seattle manages a seaport and international airport, supporting tourism and commercial fishing industries, and environmental sustainability efforts. The port is an economic engine for the region, not only a gateway for trade, but for fair employment opportunities, workforce development, and government contracts. Currently, there are no people of color serving at the Port of Seattle.

Sam Cho is the son of Korean immigrants, who attended American University and London School of Economics. Cho has experience in the federal level at the U.S. Department of State, Congressional staffer to Ami Bera, and Barack Obama political appointee to the U.S. General Services Administration. Cho returned to Washington state and started Seven Seas Export and worked as a legislative assistant to state Sen. Bob Hasegawa (D-11). In 2018, Gov. Jay Inslee appointed Cho to the board of the Washington State Commission on Asian Pacific American Affairs. Cho is looking to fight human and labor trafficking at the port, increase language accessibility, and provide more opportunities to communities of color.

Grant Degginger is a fifth-generation resident of King County and served as a former mayor and councilmember of Bellevue. As mayor, Degginger expanded the lightrail to the Eastside, replaced SR 520, and expanded small businesses and affordable housing. Former Gov. Chris Gregoire appointed Degginger to the State Public Disclosure Commission. Degginger also serves as President of Temple De Hirsch Sinai and Treasurer of the Seattle Sports Commission.

During the debate, Asian Pacific American Labor Alliance asked candidates about supporting unionized workers win contracts. Degginger stated that workers should be allowed the right to collective bargaining. In contrast, Cho believes that the Port should pay workers beyond the $15 minimum wage, provide healthcare, and conduct a top-down revaluation of employees that would given an opportunity to contract workers to be reclassify and gain benefits.

In regard to airplane traffic over Beacon Hill, Cho wants to go to the Federal Aviation Administration to change flight routes to be over Elliott Bay. Degginger will also lobby Washington DC, but did not propose an alternative route. He said he would increase the noise standards that homes are built for, which could address noise mitigation.

Both Eric Blumhagen and Liza Rankin are parents who are heavily involved in their school’s PTA. Blumhagen advocated for later start times for middle and high school students and for preparing students who wish to work in the skilled trades. Rankin served on Seattle Public School’s (SPS) ethnic study curriculum review and library equity teams.

When asked about data disaggregation, neither candidate could answer the question nor fully articulate an understanding of why the issue is important for Asian and Pacific Islander communities.

“Asian and Pacific Islander communities in the greater Seattle area come from dozens of unique cultural and linguistic backgrounds,” said Michael Itti, the night’s moderator and executive director of Chinese Information Service Center. “However, school district data frequently does not utilize disaggregated information by Asian and Pacific Islander ethnicity, which often obscures the educational attainment and disparities within our communities.”

In recruiting and retaining teachers of color, Blumhagen said he would focus on targeted outreach to historically black colleges and universities. On the other hand, Rankin would work with the City of Seattle for teacher incentivized housing and would recruit younger teachers who may be more diverse.

Chandra Hampson is from the Winnebago Tribe of Nebraska and serves on the Seattle Council PTSA. Hampson graduated from Stanford and attained an MBA from UW, she has a background in fiscal services and economic development at Native American Banking Services and Craft3.

For API students, both candidates acknowledge data disaggregation as an issue but are not confident in using the data. Muñiz is proposing bicultural and bilingual programs and after-school programs, increasing family support services, and revising the school’s disciplinary policies. Hampson would increase opportunities for dual language opportunities and promoting students with home languages, and developing identity spaces in schools.

Hyeok Kim, former deputy mayor to Ed Murray, encouraged voters to approve Referendum 88. Referendum 88 would implement I-1000, a measure approved by the Legislature earlier this year, which allows Washington to remedy discrimination for women, people of color and veterans. It would implement affirmative action, without the use of quotas or preferential treatment in public education, employment and contracting.

Deadline to register by online or mail is October 28th. Last day to register in person is November 5th.

Election Day is November 5th. Ballots must be postmarked or returned to the drop box by 8:00 PM.