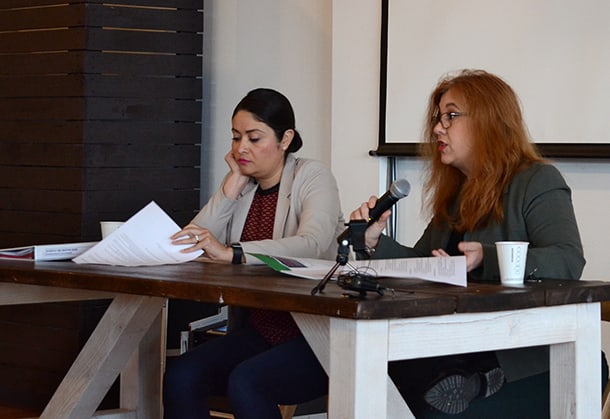 Early on Friday morning, constituents gathered at the Metropolist event space in SoDo to express their concerns loud and clear about the City Council’s proposed employee hours tax, or “head tax.” The tax would charge Seattle businesses making more than twenty million dollars a year 26 cents per employee hour. The tax would affect three percent of businesses in Seattle and generate $75 million dollars a year. Three quarters of this funding would go to developing 1,780 housing units. The remaining 25 percent would finance social service providers, who are currently under a great deal of stress to remedy the homelessness epidemic.

In SoDo, Councilmembers Lisa Herbold and Lorena González explained the plan for the head tax, and then listened to passionate constituents. One after another, speakers took issue with the City’s use of taxpayer money to address a homelessness problem that has only grown in the face of increased spending.

Attendees wanted to see progress, and with the recently imposed income tax levy as well as other taxes, many were skeptical about opening up their pocketbooks even more after seeing homelessness continue, and in some cases increase, in their neighborhoods.

Frustration about how the city was dealing with affordable housing mounted. According to documents released at the meeting, only 12,419 affordable housing units have been procured and another 2,580 are currently under construction while the demand for housing begs 140,000 affordable units. Constituents asked why there wasn’t an expedited process for building needed housing and why unoccupied units in market-rate developments couldn’t be used.

The conversation between constituents and councilmembers that ensued recognized the complicated situations that propel people to homelessness and simultaneously mourned how the conditions that come along with homeless populations affects the health and well-being of their communities as well.

Some residents said having a homeless population that is not receiving adequate help is leading to an air of aggression in the area; needles are thrown over fences and walls where industrial employees are working. One resident described finding the words “ha ha” written on their front door with human feces.

Ari Hoffman, a board member of the Bikur Cholim  Machzikay Hadath Synagogue in North Seattle, where a Jewish cemetery has been dealing with open defecation and hypodermic needles at their grave sites, was passionate in saying that legislation and policy are not being properly implemented.

“This problem is caused by the city not enforcing its own laws,” said Hoffman, citing an encounter with police officers who said they couldn’t do anything about various crimes at the cemetery despite video footage evidence. “You are not doing anything with the criminal component of this at all,”

Hoffman also urged the city to look at the root causes of homelessness rather than slapping tax after tax on Seattle residents.

González addressed the concern: “The reality is that in order to provide the mental health services [and] to deal with the root causes, we need funding to be able to do that and we are not funding those types of programs that are at the root cause of issue related to homelessness at the level required to make a significant investment. This funding proposal provides us a path forward to be able to do the funding required on the precise issues that you all are talking about…”

Still, constituents expressed caution about shoveling out more money from their businesses and personal pockets. One constituent paralleled the City Council’s approach to homelessness to a leaking bathtub where rather than identifying the source of the leak, the solution is to add a second faucet. Another constituent said that while he is “game” for the head tax, citizens and taxpayers need to know that their dollars are going towards an effective approach of curtailing homelessness.

The Head Tax in Context

Friday’s Town Hall was meant to discuss the proposed head tax but it quickly become much more than that. Constituents concerns highlighted not just housing affordability and homelessness, but also brought to the forefront our region’s economic dependence on Amazon.

The tax has caused tension between Amazon and Seattle over the past few weeks. Amazon recently halted planning for a new building downtown and suggested it might sublease another, threatening the livelihoods of hundreds of construction workers employed by the company’s property development. According to Councilmember Herbold, Amazon owns one-fifth of all the city’s office space.

These circumstances raise questions about how various local industries and businesses are dependent on keeping companies like Amazon as clients to survive, a very present circumstance for some attendees at Friday’s town hall meeting. One business owner said that he would lose revenue without Amazon, and that if large companies like Google or Facebook stopped hiring due to hostile relations with the City, it might have a ripple effect. Other business owners also argued that while their enterprises may make more than $20 million, their revenue is spread across not just paying employees, but production, overhead, and personnel costs that are the nature of brick and mortar enterprises. The tax, they said, would burden them heavily.

Among the contention and disagreement over the head tax and the larger context of the City’s approach to affordable housing, Gonzalez reiterated the importance of rallying around a shared cause to problem solve: “I hope to be able to have this conversation with an understanding that no one in this room takes pleasure and joy in seeing human suffering at any level. I’d appreciate if we could have a conversation that comes from that space of agreement,” she said.