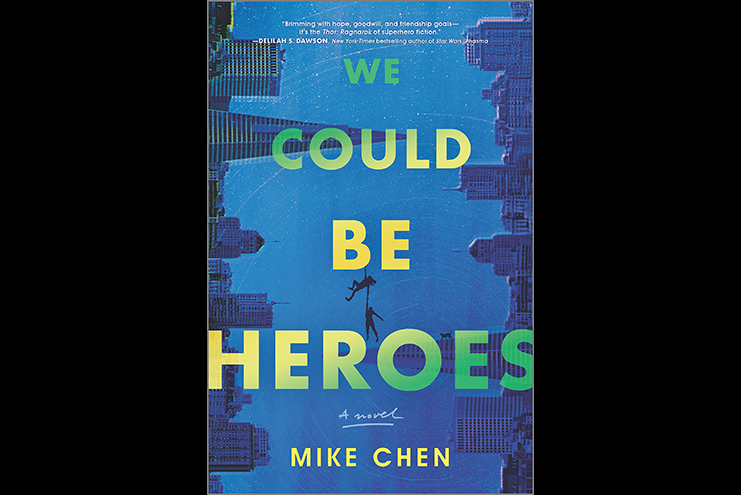 Rainy days in Seattle’s January through March can be daunting. They can be especially daunting when the March weather continues into June.. To lighten one’s spirit, an entertaining diversion can help. I was asking myself the other day, what had I read recently for fun? A superhero adventure that is part mystery can be amusing and for the most part, Mike Chen’s does a good job of setting up his novel, We Could Be Heroes.

One of the two main characters is Jamie Sorenson who, as the Mind Robber, can rob banks by threatening to “brain stun” victims into a stupor and “rob you of the very things you love.” The second central character is Zoe Wong, who isn’t “just any hero,” but one with strength, speed, the ability to hover, and thermal vision. The newspapers called her “The Throwing Star” because Zoe has crafted herself a costume of “black leather, each piece held together by interconnecting zippers that unintentionally looked like a silver star.” When these two people collide in the opening first two chapters, the story is kicked into a full gear.

This early pacing style works well because Chen has decided to use alternating points-of-view and short, brief chapters. There is a total of 45 and none is longer than 10 pages. Readers learn that Jamie doesn’t know who he is, that his present goal is to rob a number of banks to earn enough financial comfort to retire on a tropical beach. Readers also learn that Zoe is driven by the choice to “be more, to choose to run off and make a difference.” Where this comes from, Zoe doesn’t know, because she, too, has big gaps in her memory.

A light touch is what is enjoyable about this book. Coincidence is a common plot structure device. Eventually, Jamie and Zoe end up at the San Delgado Memory Loss and Dementia Support Group where they separately and conveniently recognize each other. There’s a lot of little in-jokes about “safe spaces” and sound effect words like “Thwack…Crunch…Whoosh.” Chen handles Jamie’s recognition through Jamie’s initial suspicion and then reading some of

Zoe’s most recent memories. For her part, Zoe notices something off about Jamie’s heat signature. Thus begins the partnership between the two characters “who could be heroes.”

Both characters are likeable and flawed, but come across as average people except for the mystery of how each acquired their powers. Jamie’s cat, named Normal, and the fact that Zoe works as a fast-food deliverer because her skills allow her to run-hover fly between buildings—also sustain a light tone with back-and-forth banter: “I can tell when you’re lying, you know.” “What?” “You’re lying. Right now. People’s brains stress when they lie and it shows up in their heat signatures. Unless they’re, like, really sociopathic.”

But the heart of the novel—the issue of identity and “finding the truth, a truth that might connect all the puzzle pieces about abilities, about her history and who she was”— is never really addressed in terms of developing a deeper character. To be fair, Jamie’s backstory doesn’t offer much as well, and this makes him a well-balanced partner—he’s the more experienced mental manipulator while Zoe is the physical hero. This novel is quick, fast and entertaining even if its characters are a little flat. Maybe in my wanting more, I didn’t appreciate the easy details of this duo as they come to work with each other. But there’s a humanity that’s hinted at with Jamie’s efforts to unravel the truth in the brief images of Zoe’s memories and Zoe’s commitment to helping strangers in need.

Barely five characters of importance, including the novel’s protagonists, populate We Could Be Heroes. Despite working so well in the beginning, a little more time outside of the constricting point-of-views chosen could have opened up the dramatic questions posed. Are the villains really villains, or are they simply misguided? The how and why of the mystery gets a bit muddled and confusing towards the climax. Broadly addressed, the reader does learn why Zoe (and Jamie) want to help people and strive to be “more” in light of their superpowers.

Still, in looking back, a few tropes of the superhero genre are broken by time the reader reaches the last page. Zoe Wong is an interesting physical hero, though at times she reminds me of the old Greatest American Hero TV show—the one where the main character lost the instructions to his suit. In certain fight scenes, Zoe’s abilities flounder and she needs to recharge. I would have liked a little more evidence of Zoe’s Asian perspective, as in the beginning when Zoe “was pretty sure she was of Chinese heritage rather than Japanese.” After three days of rain, I’d finished this novel, entertained and mentally lighter for the escapade.