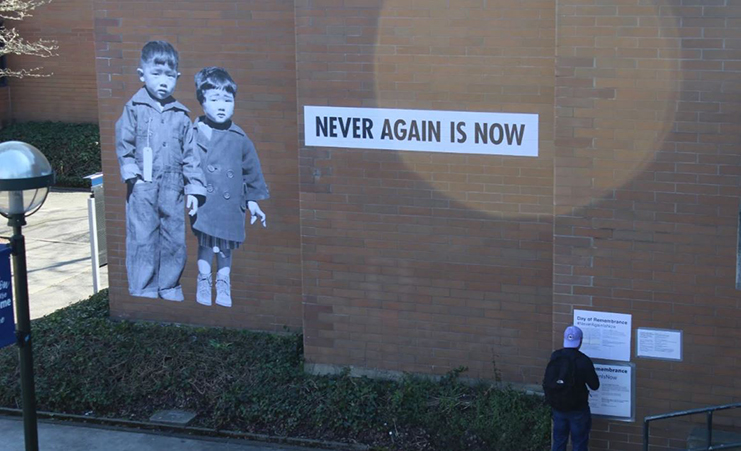 At a time when major institutions are scrambling to demonstrate awareness of Asian American concerns, you might think a school like Bellevue College could be a national model. Yet despite the leadership of Interim President Gary Locke, BC continues to face controversies over whether Asian American issues, and Asian American women’s voices, are being taken seriously.

Censoring a city’s troubled past

Behind Bellevue’s affluent, multicultural image, however, lies a troubled history. Once, it was known for its Japanese American strawberry farmers, who’d made the area habitable by clearing away tree stumps abandoned by the white settlers’ logging industry. Then, in World War II, Japanese Americans were themselves cleared away, incarcerated in U.S. concentration camps.

This forced removal was the culmination of a long Asian exclusion movement. Its leading local figure, Miller Freeman, largely defined Bellevue’s postwar transformation into an overwhelmingly white, affluent suburb, emblematized by the Bellevue Square shopping center developed by his son and grandson. (David Neiwert tells this story well in his book Strawberry Days.)

In this era of racial reckonings, an institution like BC could help lead Bellevue to face its past. Easier said than done: in early 2020, a commissioned artwork by local Japanese American artist Erin Shigaki was censored, when a reference to the incarceration of Bellevue Japanese Americans and Freeman’s anti-Asianism was crudely whited-out. An uproar led to the departure of BC’s president and of a prominent administrator accused of the defacement.

In a letter to the Japanese American community, acting president Kristen Jones and trustee Richard Fukutaki expressed a commitment “to expanding opportunities for faculty, staff, and students to learn about… the local history of Asian American and Pacific Islander communities” and to “work hard to restore trust.”

They also promised to contact Shigaki and community leaders to “dedicate time at a future board meeting or other gathering for ongoing listening and dialogue.” Asked about this meeting, BC’s Vice President of Diversity, Equity, and Inclusion, Consuelo Grier, stressed other subsequent equity efforts, and noted that Shigaki’s mural, with a restored label, remains on display. A spokesperson subsequently acknowledged that they have no evidence of efforts to set up a meeting, citing the distractions of the COVID lockdown and search for a new president.

Shigaki told me two student reporters did manage to reach her in April for an interview. Later, the AA&PI student group coordinator invited her to an event, which she couldn’t attend. But Shigaki confirmed she was not invited to meet the board, nor officially contacted about the continuing display and maintenance of her artwork, which was designed as a temporary installation.

A few months later, after Gov. Locke’s appointment as interim president, a decision was made to terminate Yuko Kodama—news director for KBCS, the college’s radio station, and a widely respected voice for racial justice. Following strong pushback, Locke used a one-time allocation from his personal discretionary budget to reverse the decision.

Then, this spring, a new controversy emerged, when the ethnic studies department failed to list its introductory course in Asian American studies for the upcoming academic year. Behind the scenes, storms were brewing, with tense debates over the implications for the course. Community advocates, including OCA Greater Seattle, intervened, and by June 10th, when a news report appeared in the NW Asian Weekly, the class had reappeared on the schedule. In a recent statement to the IE, Grier wrote, “There was always a commitment to hold the course and this information was shared at length with those that inquired across the campus”—prior to the community interventions.

Yet Nan Ma and Tony Vo, who taught sections of the course this past year, were unconvinced. In a June 17th op-ed, they described a pattern of inconsistent explanations and stonewalling that left them “sidelined” and “in the dark” about the class’s future. Ma, a tenured professor on sabbatical for the coming year, remains frustrated over her inability to learn more about plans for the class, while Vo, an adjunct instructor, has not been offered future teaching.

After a heated series of internal emails over the issue that preceded the news reports, Chris Bell, BC’s dean of social sciences, wrote separately to a faculty member who’d clashed with Ma, stating, “Her latest missive is again misleading. I cannot help but use to [sic] timeless phrases: ‘The lady doth protest too much, me thinks’ and ‘hell hath no fury like a woman scorned.’”

Bell did not reply to a request for response. Asked what the college would say to objections that the email was inappropriate or sexist, Grier wrote that BC takes seriously concerns that members of the community are not upholding the school’s commitment to inclusion, but that they would not comment on specific employment matters.

“I feel the future state of Asian American studies is quite uncertain at this point, given the way the class is being scheduled,” Ma said in a recent interview. “I don’t feel it is very conducive to its growth.” She added, “It’s really heartbreaking, and also frustrating, that Asian American issues are still very invisible at this college.”

Vo, a first time instructor at BC, praised Ma’s mentorship, adding that he felt support from his department chair when he began teaching. “But I did feel there was a lack of transparency and mutual respect as colleagues, not to inform me about the status of the class,” he said.

The class was powerful, for Vo. “I loved seeing these students grow into their identities. A lot of them had never been in a space that was primarily Asian American, and never had a chance to learn about the history of Asian Americans,” he said, adding that some students cried. “They were just so embarrassed and saddened that they hadn’t learned this information earlier, and it was very empowering for them,” he said.

Jordana Gouveia, a Brazilian international student, chose to take the course after seeing the size and diversity of the Asian American population at BC and in the region. “It was a class that was life-changing for me, because it shifted my perspective on a lot of things,” she said. She reflected on her own cultural values and learned how the victories of Asian American activism benefited her life in tangible ways. Being Ma’s student was a “privilege,” Gouveia said, citing the “culture of care” she saw in Ma’s student interactions.

As investments go, it’s modest: an instructor like Vo would only be paid in the range of $5,000 per class—on the higher end for local community-college adjuncts, the temp workers of higher-ed. While institutional costs for a single class are tricky to calculate, it’s hardly a commitment that would break the budget, especially at a time when interest among (revenue-generating) students should be growing.

Although there have been fears among faculty that these debates have pitted Asian American and Black concerns against each other, neither interpersonal conflicts nor worries about scarce resources should prevent BC from committing to fully support all areas of ethnic studies. For her part, Gouveia said she saw no tension among student groups on these issues.

“Anyone who has experienced ethnic studies understands that there is nothing competitive about the narratives and histories of the major ethnicities that comprise the curricula of higher education and K-12,” said Dr. Kyle Kinoshita, an expert in K-12 educational leadership. “It is the opposite. Asian American studies powerfully reinforce and complement the stories of Black, Native and Latinx peoples in understanding how racism and White supremacy came into being, and how they ‘work’.”

A veteran of ethnic studies organizing as a student and a school district administrator, Kinoshita traced the local history of Asian American and Black solidarity organizing to the 1960s, citing leaders like Aki Kurose and Phil Hayasaka, as well as radical youth activists. Along with ethnic studies campaigns, both groups connected through struggles against housing segregation and gentrification. Last year, Kinoshita helped the Seattle JACL organize an online series fighting anti-Blackness within the Japanese American community.

“Asian American studies is a powerful counter to anti-Blackness,” Kinoshita explained. “It is a part of the larger response Asian Americans must embrace in uprooting anti-Blackness and the ‘model minority’ narrative that supports it.”

Support for BIPOC communities’ concerns is not merely a matter of individuals’ identities. Appointing Gov. Locke as interim president didn’t constitute a reckoning with Bellevue’s anti-Asian past, and the historic nature of his political career doesn’t substitute for classes in Asian American history.

In the NW Asian Weekly article, Locke erroneously stated that no Asian American studies classes would be offered this fall at many local community colleges, or at the University of Washington. While he graciously acknowledged his mistake when corrected, the episode is a reminder that antiracist advocacy does not end when BIPOC leaders gain power—rather, diverse leadership is a means to ensure that community issues are addressed equitably.

Grier, the DEI administrator, was unequivocal about the school’s ongoing commitment to equity, asserting that “it is imperative that we continue to strive to do and be better and with a sense of urgency.” Although these controversies make rebuilding trust harder, it’s still true that Bellevue College could be a regional and national leader on Asian American issues. For now, Asian American communities will keep watching developments on the Eastside.