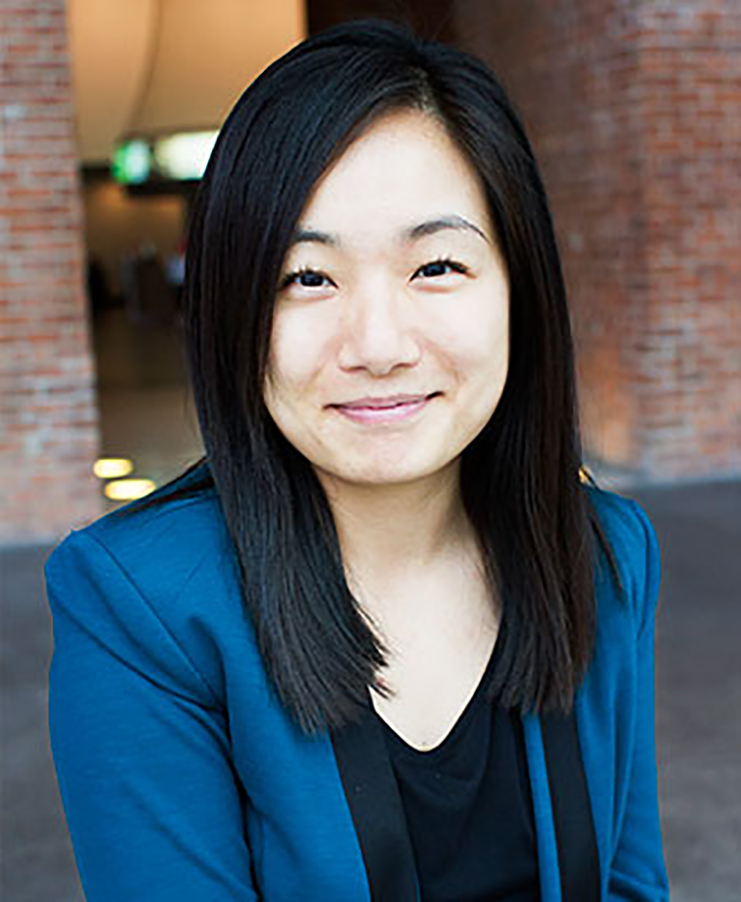 Viewers to an art exhibition usually focus their attention on the works of art. Some read the information on the wall cards and panels. But the work of curators, the people who choose and arrange those works, research and write those words, has a large if less visible influence on how we experience art.

Black Refractions: Highlights from The Studio Museum in Harlem is a survey of works from that museum’s permanent collection, which was on view at the Frye Art Museum this summer. The Studio Museum was founded over 50 years ago, to exhibit and support the work of artists of African descent. Now internationally respected among culturally-specific institutions, it is building a new home on its original site in New York City. During construction, Black Refractions is touring to six U.S. museums.

Connie Choi is associate curator of the Permanent Collection at the Studio Museum. Trained as an art historian and educator, she has an immersive knowledge of the museum’s collection of over 2,500 objects. As Black Refractions’ lead curator, it was her job to select the 100-plus works that would be shown in museums from New England to the West Coast, to diverse audiences in different spaces. The show opened a year before the COVID pandemic began. Several months into the pandemic, George Floyd’s murder ignited protests and confrontations around the oppression of African Americans. The artworks that the Studio Museum has collected over half a century seem more relevant than ever.

Black Refractions was one of Choi’s first projects when she joined the Studio Museum in 2017. Her doctoral research and past curatorial work focus on African American art, making her career path look like a straight line to her current position. But in an interview, she described a more serendipitous route. Although Choi’s parents emigrated from Korea, they were not what can be known as stereotypical Asian American ‘tiger’ parents, pushing their children into science, math and professional careers.

“My parents really encouraged us to pursue our passions because it was part of their understanding of what the ‘American Dream’ was: they were providing their children with an opportunity to do the things that they wanted to.” Choi and her siblings participated in sports and took music, dance and art classes. Her mother loved art and instilled that love in Choi at an early age. As a freshman at Yale University, she tagged along with a friend who was going to sit in on an art history class. Choi ended up majoring in art history; her coursework covered a range of time periods and subjects. The head of her residential college was Robert Farris Thompson, a preeminent scholar of African art. His classes introduced her to a way of thinking about art and artistic production that contrasted sharply with western art history. Choi described his teaching as “life-changing.” She initially saw herself as an educator. While still an undergraduate, she worked at ArtSpace, a non-profit gallery in New Haven, in a program to engage teens with contemporary art. There she saw analogies with her own youthful introduction to the arts. She wanted her students to be able to connect the art they saw with their own lives and the world around them.

“I actually really do think that curatorial work is education,” she states. Following a Masters degree in art education from Harvard and an internship in the Education Department at the National Gallery of Art in Washington D.C., Choi entered the doctoral program in art history at Columbia University, still bent on a career in education. Concurrently, she worked at the Brooklyn Museum, first as a research associate and later, assistant curator.

The Brooklyn Museum is a large and venerable institution; the Studio Museum is smaller, with a more focused mission. While Choi sees education, artists, and community as central to any curator’s practice, she knows that opportunities vary with the scale of the organization.

However, a larger institution can offer access to specialized expertise and experience. Choi’s interactions with the conservation staff at the Brooklyn Museum prepared her to work with freelance conservators at the Studio Museum, which does not have its own conservation department. Choi also emphasized the important role that mentors have played in her career.

“I’ve been very lucky in terms of having mentors who have supported me the whole way through. It hasn’t just been mentors of color… there have been any number of professors at the undergraduate and graduate level who have been willing to talk to me, to encourage me, who have provided me with opportunities.”

She particularly credits Teresa Carbone, then Andrew W. Mellon Curator of American Art at the Brooklyn Museum, who entrusted her with research and writing assignments and sought her input on exhibitions. While at Brooklyn, Choi worked on the exhibition Witness: Art and Civil Rights in the Sixties with Carbone and Kellie Jones, a curator and historian that Choi also cites as an important mentor.

While she concedes that that level of support is not available to everyone entering the museum field, Choi is optimistic about opportunities for young people of color. There is less reliance than in the past on unpaid or underfunded internships.

“Something that the Studio Museum takes very seriously is its internship and fellowship programs: there’s a deep investment in working with young people of color, so that they understand what the museum field is, so they can have a broader understanding of what they would need to enter it as a field, because it’s not going to be easy.”

Of the field in general, she believes, “We’re making a lot of inroads… In the past couple of years there has been tremendous change in hiring practices. We’re seeing so many more curators of color in leadership roles. Not just in emerging or junior level positions, but really leadership positions. I think it’s going to be different moving forward. It’s obviously a necessary and welcome change.”