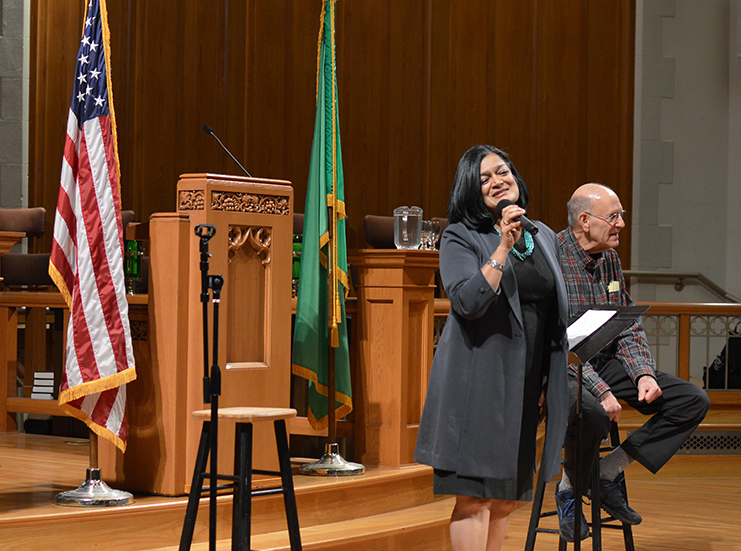 In the first six months of 2019, Congresswoman Pramila Jayapal’s office received 22,000 letters, emails and phone calls, many from people concerned about healthcare and policies from the Trump administration.

Jayapal’s first Town Hall of 2019, on February 20 at Seattle First Baptist Church, was light on issues specific to District 7 that she represents, which includes Seattle, Burien, Edmonds and Shoreline. It focused on national issues such as healthcare, Trump’s policy of separating children from their families at the southern border, and the path forward for Democrats and progressives.

Jayapal lauded Democratic victories such as winning back the House during the midterms — “It is pretty fantastic to be in the majority,” she said — defeating “Trumpcare,” holding hearings on gun violence for the first time in eight years, and passing a resolution to withdraw U.S. military support for the Saudi war in Yemen.

In November, the voters elected the most progressive and and diverse House in the history of Congress, Jayapal noted. The Congressional Progressive Caucus (CPC), which Jayapal co-chairs, now makes up around 40 percent of the Democratic House, and Jayapal negotiated with Speaker of the House Nancy Pelosi to assign more members of the CPC to powerful committees. “I feel like the progressive movement has never been stronger,” Jayapal said.

Jayapal mentioned a bill addressing “dignity for detained immigrants” that she is co-sponsoring with Congressman with Adam Smith, and which “dramatically transforms detention in this country.”

Jayapal also spoke about her Medicare for All bill, unveiled February 27, which has 107 co-sponsors, and will have hearings in the House. The bill, which Jayapal called the most progressive single payer bill ever introduced, would provide free healthcare to all with no premiums, copays or deductibles, within two years.

Jayapal has not outlined the specifics of how the bill would be paid for, but identified taxes on the wealthy and corporations and a repeal of Republican tax cuts as sources, the Seattle Times reported.

“Almost every industrialized country in the world has a government-funded insurance system that provides healthcare to every person in this country,” Jayapal said.

At the Town Hall, Jayapal said she is looking forward to making the case that it’s wrong for millions to be uninsured while pharmaceutical and insurance companies make billions of dollars in profits, while “regular people are going into foreclosure, they’re using go fund me as an insurance plan, and they are dying. That is simply not right,” Jayapal said. “This is a crisis of incredible magnitude for our economy, and it’s a moral crisis.”

The bill is intended to lower administrative costs of healthcare, and would control the prices of pharmaceutical drugs. While the government won’t provide care, it will take on healthcare administration.

“You will keep your same doctors and hospitals,” Jayapal explained at the Town Hall. “We are using the same provider network that exists. But the payment is not going to come from multiple places, it’s going to come through the government.”

During the question and answer portion of the Town Hall, a member of Students for a National Health Program from the UW School of Medicine said he was concerned the Medicare for All bill does not appear to include people who are not U.S. residents, and asked how Jayapal will make sure that undocumented immigrants, people with green cards and people without a home are covered.

“You’re talking to somebody who has worked on immigration issues for a long time, so you can be sure that I am right there with you, this is about covering everybody in this country,” Jayapal responded. “We should have comprehensive immigration reform ideally before this bill even comes into effect so that we can make sure that we’re covering everybody.”

Jayapal also answered questions from constituents about the 2001 Authorization for Use of Military Force for the War on Terror (she supports ending it), affordable housing, the welfare of intersex people, over-reliance on standardized testing in schools, the Green New Deal and need for urgency on climate change.

Jayapal said she would not stop fighting the Trump administration’s policy of separating children from their families at the southern border. In February, a video of Jayapal questioning acting Attorney General Matthew Whitaker about the policy — and whether he understood its damaging impacts on children — during a hearing before the House Judiciary Committee was widely shared on social media.

“I don’t know what to say about this that captures the heartbreak,” Jayapal said. She recalled meeting with women in a federal prison who had been separated from their children. “This is a tragedy of epic proportions.”

When asked by a constituent how Democrats will pass bills in a Republican-controlled Senate, Jayapal noted that some bills she’s worked on have bipartisan support, and that Republicans also bear some responsibility for deferring to Trump on votes. “The Republicans have to have a spine and they have to start to speak up for what they believe in,” Jayapal said.

Jayapal framed her progressive agenda as appealing to all Americans: “They’ve dragged us so far to the right that we seem like we’re crazy when we’re standing right in the center of the country and speaking to the vast majority of Americans across the country with these ideas that are not radical, they’re the ideas that every industrialized country in the world has instituted,” Jayapal said. “Let us pull the country back to where it needs to be, which is to deal with the issues of the vast majority of people, instead of the one percent and the corporations, and hopefully Republicans will be with us there.”