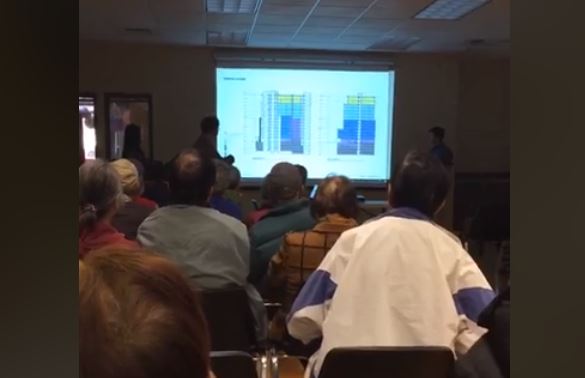 On September 21, developers of a proposed project on 8th and Lane Street hosted a community meeting at the Chinatown Community Center to present the project to the community and answer questions. The meeting was announced less than 48 hours in advance.

The proposed project is a 15-story mixed-use development comprising a hotel and apartments. The bottom seven levels will be reserved for the hotel, while the rest of the units will be apartments—in total, 256 units. None of the proposed apartment units will be affordable according to the City’s standards.

People at the meeting raised concerns about traffic congestion and diminishing supply of parking in the area. The location at 8th and Lane will impact three social service organizations. One is Legacy House, an assisted-living service for Asian and Pacific Islander elderly, most of who are limited-English proficient. Another is the Denise Louie Education Center, which offers child care and early education services to low-income immigrant and refugee families. Third is the International Community Health Services (ICHS), which provides culturally and linguistically appropriate health services.

An ongoing traffic congestion study is being conducted for the area between developers and Seattle Department of Transportation. But many in the community meeting are concerned about the increase in traffic and its threat to public safety in an area that services children and elders.

At the meeting, an elder asked people in the room to raise their hands if they live in Chinatown. The question raised the issue of who owns Chinatown, in particular of the youth who may not be able to afford living in Chinatown, but return for there community. While an argument broke out, many sulked to the back to grab humbows and water provided, before leaving.

The meeting highlighted divisions within the Chinatown International District. Some community members saw the development as a benefit to the neighborhood in attracting additional commerce and business for the area. However, others feared that the cost of attracting new business will be diminishing housing affordability for low-income families and elders on a fixed income, who depend on the local social services and community that Chinatown provides.

Seattle’s Chinatown-International District is not the only one facing gentrification and displacement. Chinatowns throughout the United States are being sought after by developers. The developer of the hotel-apartment complex on 8th and Lane will likely not be the last to move into the area.

The following is a Facebook Live video of the meeting by Humbows Not Hotels: