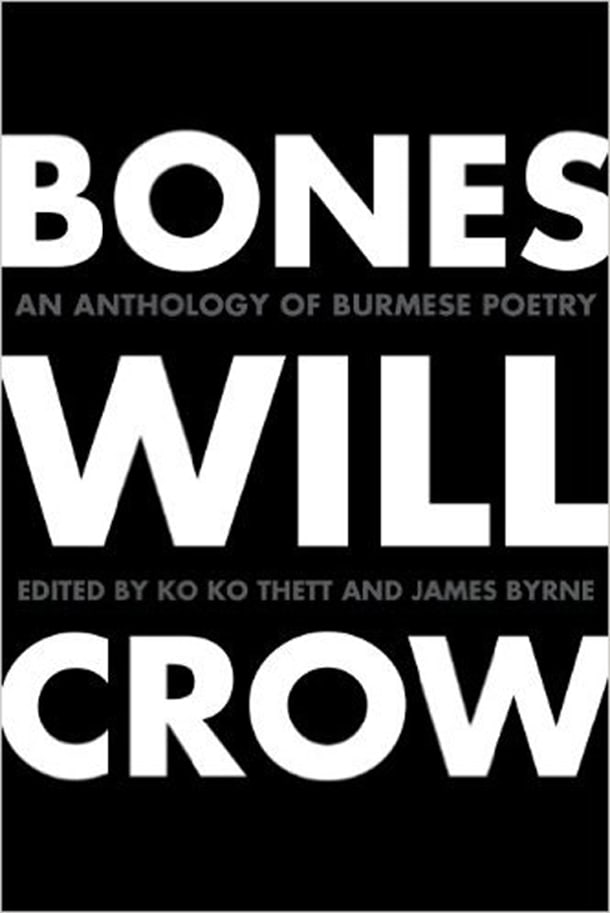 “What I hate most in this whole world is
That scumbag named Truth
Whose fat face is
Scarred with chicken pox.
In this life
You don’t need four, five, or six.
You only need two.
Just two, real love and
An authentic foe.”

From A Sun-Ripened Song
by Maung Chaw Nwe

The timeframe for Bones Will Crow, An Anthology of Burmese Poetry, edited by Ko Ko Thett & James Byrne (Northern Illinois University Press, 2013) starts in the midst of political upheaval when the 1962 coup d’etat replaced Burma’s democratic government with a military dictatorship. It moves forward from here to present day Myanmar, just recently emerging from years in isolation. The work of these 15 writers together is what the best anthologies are all about. The poems speak strongly in the individual voices of each writer, but also come together in a chorus of shared history and the groundbreaking of new traditions.  Zeyar Lynn’s introduction is a fascinating overview of Burmese poetics and the cultural tensions of moving from more formal constructions at the turn of the century to the lyric to language poetry and beyond.

There is the loneliness of exile in this writing, the loneliness of never having left, the solitude of writing, of camaraderie, the thrill of making choices for one’s voice.  I kept finding myself folding down the corners of every other page. Readers will find compelling vocation in this book, all the more wonderful in that this is the first collection of modern Burmese poetry available in the United States.

The anthology is skillfully edited by Ko Ko Thett and James Byrne—Thett is also a contributor and translator, and Byrne a translator. The organization is chronological, with each set of poems prefaced with a short bio of the writer.  The poems are presented in both Burmese/Myanmar and English, in the hands of a number of translators. This is an important collection!