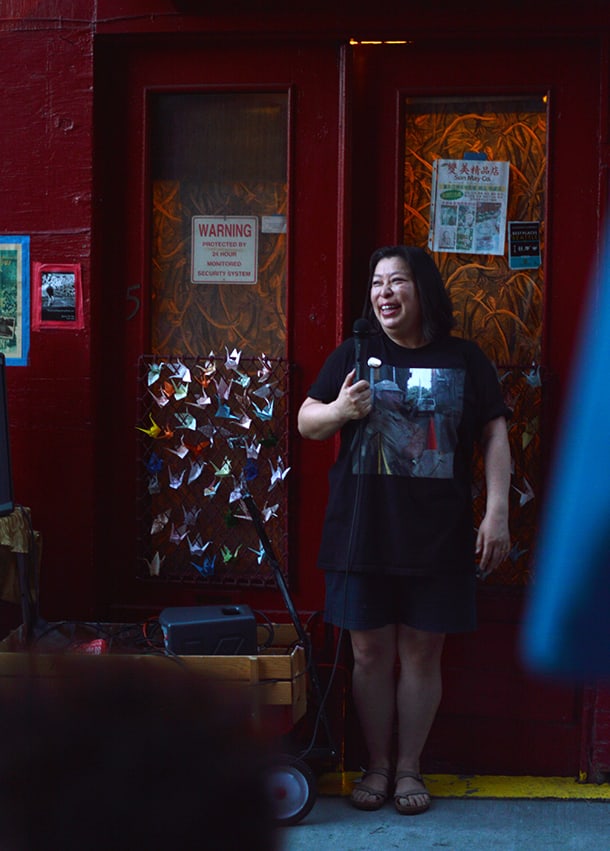 On the third anniversary of Donnie Chin’s death, over 100 people filled Canton Alley on Monday evening for a vigil to honor his life spent protecting the Chinatown International District (CID) neighborhood. While speakers shared stories about Chin and the impact he had on their lives, golden sunlight beamed through the alley, only beginning to dim and yield to glow sticks and lanterns from the crowd as the vigil ended.

Chin was fatally shot on July 23, 2015 a few hours after midnight, after he drove toward sounds of gunfire on Eighth Avenue South and South Weller Street.

Responding to emergencies, warding off danger and offering first aid — and often beating the police to the scene — was routine for Chin, whose only job for decades was keeping a vigilant watch on the neighborhood.

Jeannette Roden knew she could knew she could call on Chin to respond to emergencies throughout the years she volunteered and worked at the Wing Luke Museum. The International District Emergency Center (IDEC), which Chin founded, was headquartered in Canton Alley a block away. One weekend, Chin had to disarm a man with an ax, and a separate man with a machete. Roden asked him if he was worried for his safety. “He said, ‘No, don’t worry about it. I’d rather it be me than someone else,'” Roden said. “And that was Donnie in a nutshell.”

Teresita Batayola, CEO of International Community Health Services (ICHS), remembered Chin’s thoughtful generosity. He would bring gifts — always age and grade-appropriate — for the children of the struggling single mother working as ICHS receptionist. “He was also a scary-ass guy,” she said, who alarmed ICHS staff when he trained them in personal safety training. Why were they looking down at their phones? Did they know who was at the next corner, behind that tree? Chin knew exactly where the drug deals were happening, what illegal activities happened at night, who carried knives, who to be careful of, Batayola said.

Assistant Chief Marc Garth-Green of the Seattle Police Department (SPD) who knew and worked with Chin for years, noted that Chin never chastised or demeaned the trouble-makers or criminals he apprehended in the neighborhood: “He cared about the community, but he also cared about how he approached people and how we approach people as police officers.”

Garth-Green and Deputy Mayor Shefali Ranganathan read a letter on behalf of SPD Chief Carmen Best and Mayor Jenny Durkan. “This investigation remains a top priority for the Seattle Police Department,” the letter read. “Donnie is a Seattle hero.”

Police have still not solved Chin’s murder. Since his death, politicians, community advocates and Chin’s younger sister Connie Chin-Magorty have expressed frustration with police for lack of communication about the progress of the investigation.

Near the end of her speech, in which she sometimes fought back tears, Chin-Magorty thanked the dozen or so Seattle police officers, (as well as Firefighters from Fire Stations 6 and 10) for attending, while calling on them to solve her brother’s murder. “Donnie was close to a lot of police officers, he worked down here so many years, he knew many of them, and we hope to continue a good relationship, and hopefully we can work on a break to get this case for Donnie solved,” Chin-Magorty said. “You know, Donnie worked for everybody for free all of his life, and he was happy to do that. But really, Donnie deserves justice too. He would fight for any of you. So we want justice for Donnie.”

But mostly, Chin-Magorty told stories about her brother’s life, often raising laughs from the crowd. Growing up at home, Chin never swore — yet out in the neighborhood he developed a habit of cursing, sometimes when he shouldn’t.

Chin-Magorty spoke about their childhood growing up around 23rd and King Street in the Central District, and how their parents’ dedication to serving the community influenced them both.

Chin got some of his independent spirit from their father, who came to the U.S. from Toishan, China when he was seven, Chin-Magorty said. Against their grandfather’s wishes to work in the family business, their father pursued higher education at the UW, and became a metallurgist for Boeing. From their mother, Chin got a kind and loving nature, a sense of duty to look after children; Chin looked after and mentored many neighborhood kids.

Like her brother, Chin-Magorty loved serving the CID community — but eventually it started to feel all-consuming, she said. She married and found a career outside the neighborhood. But her brother stayed rooted in Canton Alley.

“Donnie stayed in the ID. This was what he loved. This was the community he cared about more than anything,” Chin-Magorty said. “We miss his spirit. I can feel on the street it’s different without him.”