For 34 years, it’s been the mission of the National Asian Pacific Center on Aging (NAPCA) to serve as a voice for the often overlooked needs of Asian American Pacific Islander (AAPI) seniors.

Over the next 50 years, the AAPI elderly population (aged 65 years and up) is expected to grow by 350 percent from 1.6 million in 2012 to 7.1 million by 2060, according to the U.S. Census Bureau. In King and Pierce counties, the number of AAPI adults aged 55 and older grew over 80 percent from 2000 to 2010. As the numbers of AAPI seniors continue to rise, identifying those needs becomes increasingly essential.

“One of the challenges is the limited resources in the face of rising language needs among our diverse population,” said Dr. Domin Chan, director of research at NAPCA. “Similar to what AAPI elders faced at the time of the Medicare rollout in 2005, limited English speaking elders risk being left behind regarding information on critical health-care coverage changes that will directly impact their lives. They may have a difficult time finding or accessing the information they need without resources like the NAPCA Helpline.”

A recent survey by NAPCA in 2012 reached out to more than 500 community based organizations (CBOs) seeking to assess the priorities and challenges facing AAPI seniors today. The 20-minute survey consisted of 29 questions, and was mailed to 558 CBOs across the United States. A total of 97 CBOs returned completed surveys.
The CBO survey responses showed that social isolation, mental health and transportation were issues that were not being adequately addressed by organizations in AAPI communities.

Chan said the CBO survey pointed to language and culture as two potential barriers that prevent people from getting the information and access to resources that they need, which include things like Medicare and how to sign up for prescription drug plans.

“We all need to think about creative solutions or services to address those issues in our communities,” Chan said.

Chan described social isolation, which topped the list of issues not being adequately addressed, as a situation in which AAPI seniors are not connected or in touch with their family or other people in the community.

“Generally speaking, a lot of seniors come [to the United States] because their kids are here, and they’ve immigrated and perhaps they were asked to take care of their grandkids,” Chan explained. “And then, at some point in time, the grandkids have grown up, and perhaps the senior is not always living in the same household as their children. And sometimes, they just are more isolated, partly because of language, partly … because of transportation.” 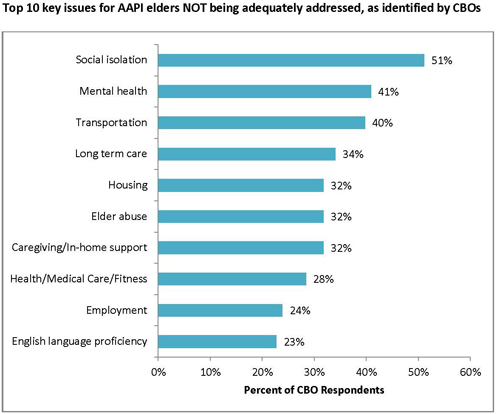 Mental health is often a topic that is resisted in the AAPI community and can lead to seniors not getting the help that is available to them, said Nelson Tang, project director of NAPCA’s Senior Community Service Employment Program (SCSEP).
“I think most Asians, when they hear they have a ‘mental issue,’ they always say, ‘No, they don’t have it,’” Tang said. “They’re really defensive. That’s why not so many people want to share that issue and bring it up as an open topic.”

The stigma that is attached to talking about mental health openly may be reflected in the high rate of suicide among elderly AAPI women today. AAPI women aged 75 and older have a suicide rate of 7.95 per 100,000, compared to the rate of 4.18 for white women and 1.18 for black women, according to the Center for Disease Control and Prevention.

The CBO survey also identified economic security as a top issue for AAPI seniors, along with health and medical care. Chan said a senior’s financial situation is directly linked to health care.

“Your economic security affects your health,” Chan said. “If you can’t afford health care and you can’t get the treatment that you want, or you don’t know where to go to get affordable health care, that’s going to affect your health. Or if you’re so busy trying to figure out where your next meal is coming from, you’re not going to be paying attention to other issues that might be related to your health.”

Cindy Yu, a senior who obtained work through NAPCA’S SCSEP, said the key for AAPI seniors is to become an active part of the community.

“I think the elderly need to be encouraged to be more active,” Yu said. “It’s better than staying at home. I would like to learn something new in society. We can make more friends.”