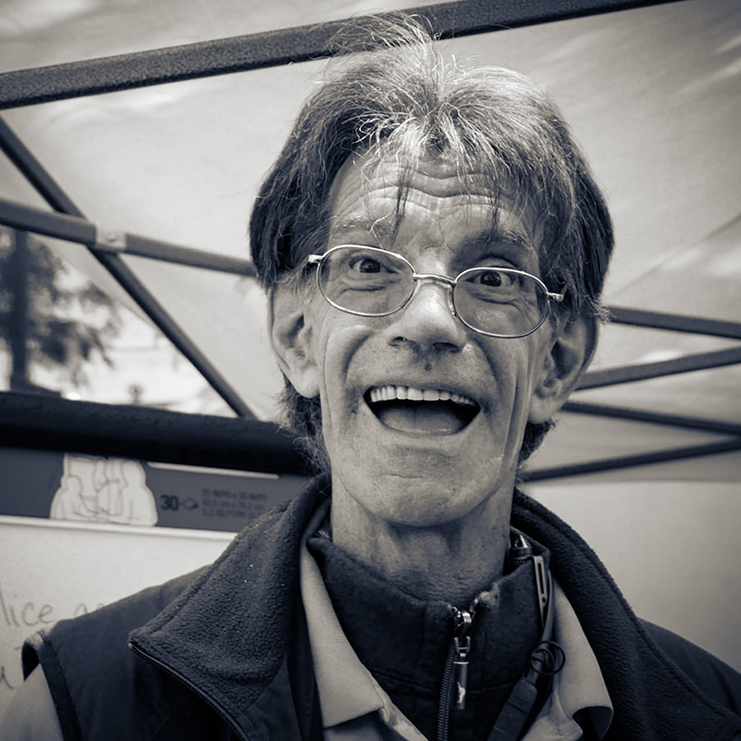 Do you have memories of Bill Lee you’d like to share with readers of the International Examiner? Please send a letter to the editor: Email [email protected], with the subject line Letter to the Editor.

Community members gathered in the Danny Woo Garden on July 17 to remember William “Bill” Lee, a Seattle Parks Department concierge and perennial volunteer in the Chinatown International District, who died near the end of June.

In front of a projector with photos of Lee, community members reminisced about a man who thrived in giving his time and support to the neighborhood, whether on or off the clock.

His brother Charles Lee brought Bill’s ashes in a box.

Dave Nakamura, who got to know Lee when he became a regular customer at J Sushi where Nakamura worked, scattered the ashes in Lake Union for Lee’s family. “He was all about the community. You don’t see people like that in this day and age,” said Namakura. “He was a kind, kind soul.”

Bill and Charles Lee grew up in a military family, and lived in Texas, New Mexico and North Carolina, Charles Lee said in an interview.  Bill was drawn to public service in the footsteps of their father, Lee said.

Bill came to Seattle while in the Navy, and “fell in love” with the city, Lee told the gathering at the memorial. “I believe he found where he belonged,” Lee said. “I thank you for being his friends.”

Working as a concierge in Hing Hay Park for the past 12 years, Lee helped make the park a welcoming gathering space, said Michael Wells, business liaison for Mayor Jenny Durkan, reading a letter on behalf of Durkan and Parks and Recreation Superintendent Jesús Aguirre.

Lee also helped InterIm Community Development Association transform the Danny Woo Garden. He was a volunteer with the International District Emergency Center (IDEC), the CID Night Watch, a member of the American Legion who maintained the U.S. flag in Hing Hay Park, and previously served on the International Special Review District Board.

“Bill’s love for the CID was and is an example to all of us in how we can serve our communities and bring joy and security in the lives of our neighbors,” according to the letter.

Bill Lee's memorial in Chinatown-ID.
1 of 3

Kay Chin, a member of IDEC, was 16 when he first met Bill. “The ID wasn’t just a place to work for him. He immersed himself in the neighborhood,” said Chin. “He had a deep respect for Donnie [Chin] and the qualities IDEC represented.”

Bill lowered the flag at half mast when Donnie Chin was killed, and every year on the anniversary of his death. He joined IDEC in 2016, the first volunteer to be enrolled as a member after Donnie Chin’s death, said Dicky Mar, IDEC board chair, in an email.

In preparation to volunteer with IDEC, Lee completed a first aid certification and volunteered at community events in the first aid station, according to Mar. He was working on earning an amateur radio license so he could help IDEC improve radio communication in the CID if a major disaster happened.

“Bill was truly a part of the CID,” Mar said. “He volunteered his free time to the community, he worked in the community, and he participated civically in the community. I can’t think of a better way to describe a man more committed to the well being of the neighborhood.”

Lee believed it would take the whole community to replace Donnie Chin, said Phillip Craft, Bill’s friend and supervisor in the Parks Department for 16 years. Craft was the one who informed Lee about Donnie’s death.

Even on days he wasn’t working, Lee could be seen picking up garbage or needles at Hing Hay Park, Craft said.

“He was never in the limelight, but he was always working hard to make sure that this community had what it needed,” Craft said. “He never really shared much about his belief system, but he showed us by doing the work, by doing the deeds, by being compassionate.”

Lee was working as operations coordinator at the Danny Woo Garden when Lizzy Baskerville started working there for InterIm. Lee showed her everything it took to maintain the garden. He continued as a volunteer in the garden, cleaning up and acting as the garden’s eyes and ears, and helped Eliza Guan transition into the role when Baskerville left.

Lee was especially excited to help with InterIm’s annual pig roast, Baskerville said. Over 14 hours, community members turn a whole pig on a spit over a fire. For years, Lee often did a lot of the set-up, and watched the pig overnight. “He was the one that stayed all night. No one wanted to be there in the wee hours of the morning, but he was always down to do that.”

His job was difficult, putting him in front of “the worst outcomes of public safety issues” in the neighborhood, Baskerville said.

“I think his job was really hard, emotionally as well as physically. And he cared a lot about people, he cared so much about the place, and that showed through by him consistently showing up.”

“He’s like this consistent person, and a lot of knowledge would have been lost without him there,” Baskerville continued. “I know he loved the community and we love him back, and I want for us to remember that and honor him.”