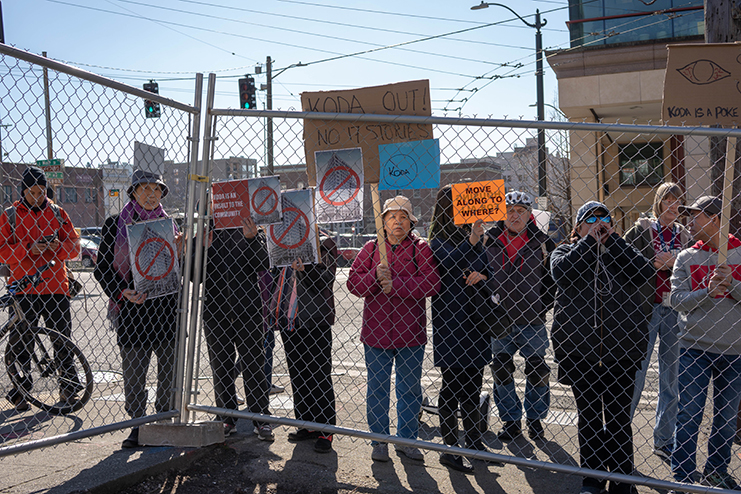 As shovels plunged into a hole in the concrete parking lot on February 28, breaking ground on Koda condominiums, around 90 people gathered in protest.

Chanting, “This is what displacement looks like,” “No Koda” and “Chinatown is not for sale,” the protesters pressed outside the chain link fence enclosing the groundbreaking celebration inside.

The project has been opposed by CID neighborhood advocates, who worry about the effects of an expensive high-rise in the poorest neighborhood in the city. “This type of luxury development triggers demographic change, rising property values and rents, and displacement of longtime residents, small mom and pop businesses, cultural institutions and community organizations,” reads a statement from InterIm Community Development Association (InterIm CDA) sent out before the protest. InterIm CDA built Hirabayashi Place, a low-income housing building that will be literally overshadowed by Koda as it rises from the adjacent parking lot.

Members of InterIm CDA and the activist group Humbows Not Hotels have criticized the project’s design — which aims to to honor Japanese culture and Japanese American history with proposed design elements like cherry blossoms lit with a LED display and a statue of a suitcase to represent WWII Japanese American incarceration — as tokenizing and out of touch. And they complain that the developers of Koda have not take community feedback about these issues seriously.

“We gave them a lot of ideas and our opinions on how this can be more community-driven, but we strongly felt that those voices were not listened to,” said Pradeepta Upadhyay, executive director of InterIm CDA, at the protest. “Community voices have to be considered in planning, the design, the architecture, considering affordability instead of high-rise condos.”

InterIm CDA became aware of the groundbreaking ceremony only a few days before, and quickly organized a protest. “We’re not going to be able to stop the building, but what we want is for future developers to understand that they cannot just come here and trample the community,” Upadhyay said.

Kevin Hsieh, vice president of development for Da Li USA,  believes the company did enough listening, outreach and design review. “We spent the past two years really trying to work with the community,” he said as chants from the approaching protesters carried through the air. “We listened to all the suggestions given by the community, tried to design the concept of the building to tailor to that of the community.”

Hsieh said Koda will feature community artwork from the neighborhood in its lobby, and a Japanese business such as a sushi restaurant on the ground floor to honor the area’s Japanese legacy. He hopes that “when you see Koda, you’re seeing the culture of the International District. It’s not just a downtown glassy office building.”

He said ground floor businesses and lighting would improve public safety and “liveliness” in the neighborhood.

As for pricing, which will range from $300,000 dollars to $1.4 million dollars per unit, Hsieh said: “We want to think that the housing we’re providing is attainable in a way for homeownership.” Koda is priced cheaper than most condos in South Lake Union or downtown, Hsieh noted. And the project is contributing funding for affordable housing as part of the Housing Affordability and Livability Agenda (HALA).

“I think the protesters think we’re a developer coming here to make a lot of money, but really we’re not,” Hsieh said. “With the construction costs these days, at this price point we’re selling it, we’re not getting much profit.”

Protesters carried signs that said “The City sold us out,” and “Build community, not condos.”

“We’re not against development and homeownership, but it has to be equitable and they have to realize what community they’re coming into,” said Michele Wong, a member of Humbows Not Hotels. “A lot of the folks here are not homeowners, they’re renters with a median income of $30,000, and if housing isn’t available to them they’re going to be displaced with all this wealth and money coming.”

Of the Koda project providing homeownership, Wong said: “What about the folks already here who aren’t homeowners, who are renters and who have nowhere else to go besides this community?”

Protesters chanted loudly over the drumming of a lion dance performance at the groundbreaking celebration. They continued for nearly two hours. Inside the fence, people involved with the Koda project celebrated and gave speeches. Tomio Moriguchi, retired CEO of Uwajimaya, prefaced a speech by apologizing for the noises of the protesters.

Before the celebration, Moriguchi called the Koda project “wonderful,” saying he’s supportive of “any market-rate housing in this area,” believing it will be good for the economic well-being of the CID.

Koda “will bring in market-rate income people who will spend at the retail stores, go to the restaurants, so I don’t see the problem,” Moriguchi said. “If they were displacing people, I could understand. But are we concerned about displacing cars?”

As the groundbreaking celebration ended and cars started driving through an alley between Hirabayashi Place and the parking lot, protesters gathered on either side and chanted “Shame on you” as people walked and drove away from the celebration. A woman started gathering Lime Bikes, piling them in the alley to block the way. A man with Koda promptly wheeled them away, smiling at the protesters. Jokes and light-hearted jabs were exchanged.

Leslie Morishita of InterIm CDA said it was inspiring to see widespread interest in a protest from the neighborhood. She didn’t view the protest as a breakdown in communication between InterIm and Da Li, but as a different kind of communication.

“We hope that they’re good neighbors and we plan to be good neighbors,” she said. “I see it as something to help motivate them with the process to do better.”

The way the developers celebrated the groundbreaking indicated to her that they weren’t taking community suggestions to heart.

Upadhyay of InterIm and Wong of Humbows Not Hotels said more protests are likely while the Koda projects continues being built. “We’re going to consistently protest until things are different and they actually listen to the community and what our needs are,” said Wong.

Hopefully, said Morishita, “other developers who are planning projects in the neighborhood will realize, ‘Hey we’ve got to deal with this community.’”