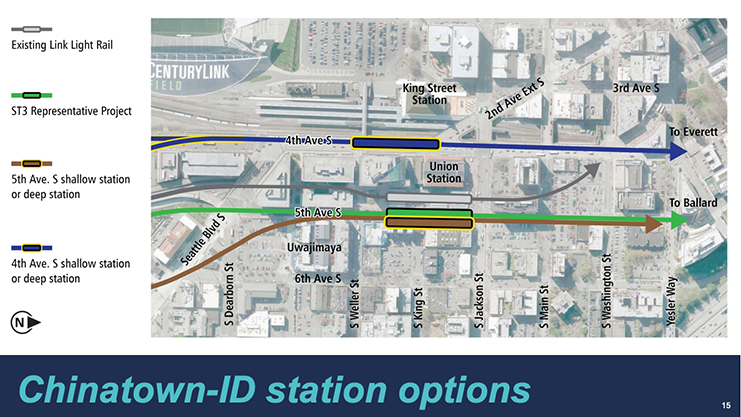 Community interest in the new light rail station planned for the Chinatown-International District (CID) was high on March 13, as greater-than-expected attendance at a public meeting at Union Station forced organizers to open additional rooms to make space for attendees. Billed as a “community workshop,” the hearing was organized by Sound Transit as a way to inform and gather feedback from the public about this major transit project which will shape the future of the growing neighborhood for decades to come.

The new station will be part of Sound Transit’s Ballard Link Extension, which will connect the CID and Pioneer Square to the northwest Seattle neighborhood with 7.1 miles of track and nine stations when it opens in 2035. As previously reported by the International Examiner, Sound Transit is currently considering five different station alternatives, with three on 5th Ave. S. and two on 4th Ave. S. Both deep-bore stations, placed 200 feet below ground, and more conventional options located just below the surface are being considered.

At the meeting, Lisa Howard, executive director of the Alliance for Pioneer Square, a non-profit organization dedicated to bettering the neighborhood, noted the role that the area around Union Station plays as a region-wide transit hub. She presented some partial findings from a not-yet-released report produced in cooperation with the Seattle Chinatown International District Preservation and Development Authority (SCIDpda), and Historic South Downtown (HSD), a state-created agency. The report was funded by a grant of up to $230,000 from HSD, which received the money from Transit Oriented Development funds given by King County.

In her presentation, Howard dubbed Union Station and the area immediately adjacent to it “Jackson Hub,” and noted it is strategically situated at the border of the CID and Pioneer Square. However, the report, which used online surveys, walking audits, and open houses with community residents, determined that pedestrian and transportation connections between the two neighborhoods leave much to be desired.

Research conducted found that the area around Union Station was unfriendly to pedestrians, with narrow sidewalks, insufficient lighting, and long crosswalks across 4th Ave. The plaza above the light rail station is cluttered with poorly maintained planters, dark and uninviting pergolas, and a lack of real-time information about train arrivals.

Howard said that a study found local residents’ biggest frustrations about the area are safety for pedestrian from motorized traffic, cleanliness, street civility, long waits at traffic signals, and cars driving too fast. A lack of wayfinding in the area, too little landscaping and vegetation, poor pedestrian lighting, poor protection from the weather, and lack of bicycle parking in the area were also mentioned as concerns.

However, Kathleen Barry Johnson, the Executive Director of Historic South Downtown, said that regardless of current cost projections, Sound Transit should fund further study for the 4th Ave. alignment for the next round of planning. She noted that only two percent of the engineering work for the project has been completed, so it’s premature to say that 4th Ave. is too expensive. She added that her organization’s position is that Sound Transit should “keep as many options on the table as possible because there’s some real benefits in our opinion to a 4th Ave. alignment.”

Maiko Winkler-Chin, executive director of SCIDpda, said that all station options should be studied in the environmental review. She noted of the 4th Ave. viaduct is around 100 years old, and raised the scenario of Sound Transit choosing to build the station on 5th Ave., and then after years of construction that is disruptive to local businesses, the City of Seattle deciding it needed to tear down and rebuild the 4th Ave. viaduct.

Sound Transit, for its part, previously told the Examiner that building the station on 4th Ave. would require third party funding, because the costs would significantly exceed the representative project. A potential source of additional funding for that option could be the City, a possibility that appears to be on the table per a statement released by Seattle Mayor Jenny Durkan:
“We have missed opportunities for transit before, and we cannot afford to miss this one. As we build a city of the future, we must act to expand access to affordable, reliable transit. The extension of Sound Transit light rail to Ballard and West Seattle is a generational opportunity for Seattle and our entire region to keep building a world-class transit system. We must also take this opportunity to build more affordable housing, and be mindful of how transit can dictate a great deal about our built environment, and determine how equitable growth is.
“As we develop the next generation of transit in Seattle, we must listen to communities on their preference for light rail expansion and understand how an extension would impact the City’s transportation system, our natural environment, the built environment, budget, and construction timeline. Community members, Sound Transit, and the City must be able to compare accurate cost estimates and environmental impacts of these options, especially if additional revenue is needed.
“I have expressed interest in a range of options, including a tunnel, in Ballard, West Seattle, and the Chinatown-International District, and have requested that Sound Transit evaluate the range of these extension options, including grade, arterial and tunnel options, so we have sound data to make our decisions that will have an impact our City and region for decades.”

At the public hearing on the March 13, community members were given a chance to voice their opinions through a series of small group workshops led by Sound Transit officials. Attendees discussed the station location and their concerns and hopes for the project, as well as what they would like the CID and Pioneer Square neighborhoods to be like in the future.

Local architect Grace Kim said any station plan should consider the historic character and culture of the neighborhood, including the age, economic and racial diversity currently present, a point that was echoed by several other attendees. Kim also said that her group preferred the 4th Ave. location and that Sound Transit should consider involving Union Station, which is currently underutilized, in the new station plans.

Several groups said that they preferred the 5th Ave. station, in part because it would be easier for elderly residents to access. Community member Tim Lee said it was important to reduce the impact that construction would have on local businesses, property owners and residents, echoing a point made by other people. Thus, he said his group preferred a shorter construction time, which would also allow community members to enjoy the new station sooner. He also mentioned the importance of preserving the China Gate on King Street and ensuring the station had adequate lighting and was designed with safety in mind.

Other ideas about improving the neighborhood were also brought up at the meeting, including making a pedestrian-only portion on King Street, allowing vendors to set up stalls on the plaza above the light rail station, ensuring that station signage had multiple languages, and redirecting traffic flows on 4th Ave.

Sound Transit is accepting public comments online about the project until April 2. After considering feedback received, the light rail expansion project team will make recommendations to the agency’s board as to which station alternatives should be given funding for further study in an environmental review. The agency is expected to make that decision in May, with the final choice about the station location to be made by 2022.