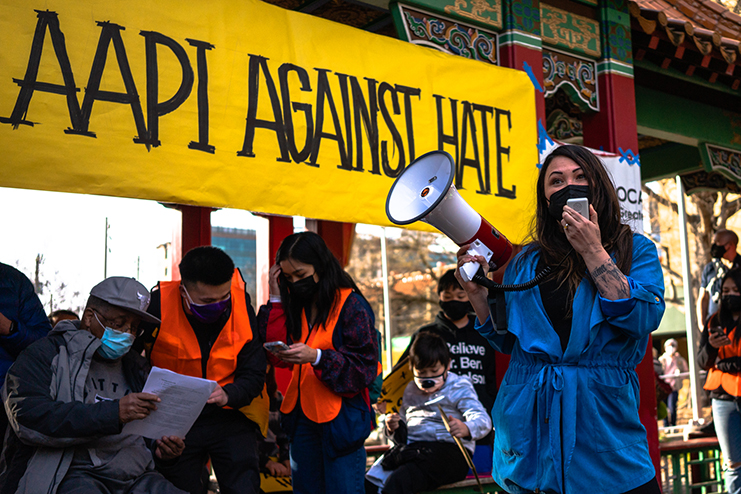 On the evening of February 25 in the Chinatown International District, Noriko Nasu, a Japanese language high school teacher was struck in the face by a man wielding a heavy object in a sock. Nasu was knocked unconscious, her nose was fractured and several of her teeth chipped in the attack. Her boyfriend Michael Poffenbarger was struck in the head, and required stitches.

Nasu believes she was targeted for her nationality, noting that the suspect deliberately went around her boyfriend to attack her.

The Seattle Police Department’s (SPD) Bias Crimes Unit is investigating the incident. A statement published on SPD’s website said they haven’t yet found evidence showing the assault was racially-motivated.

The King County Prosecuting Attorney’s Office chose to charge Holdip for assault rather than a hate crime. “At this point, based on the evidence received from investigators, we have not filed this case as a hate crime because, as horrible as this attack was, we do not believe we can prove a hate crime before a jury beyond a reasonable doubt,” according to a statement from the Prosecutor’s Office.

The Seattle Police Department has documented a rise in anti-Asian hate crimes — 14 reported in 2020, compared with nine in 2019 and six in 2018.

They are among over 3,000 such attacks reported nationwide last year.

Michael Byun, executive director of the Asian Counseling and Referral Service (ACRS), believes the number of incidents is likely higher than reported. He attributes the uptick in attacks to “post-election angst and anger from especially those who uphold white supremacy, and needing to find a scapegoat.”

On March 13, hundreds of people rallied and marched in the CID against a nationwide trend in attacks against Asian Americans during the pandemic.

Community leaders in the CID have been aware of the threat of anti-Asian violence since the start of the pandemic, said Pradeepta Upadhyay, executive director of InterIm Community Development Association, after white nationalist stickers were placed in public places in the neighborhood. “We didn’t see any physical assaults per se, but there was always the subtle fear, that there is a community that is already being targeted,” she said.

“Here’s already a very vulnerable, low income population, predominantly seniors, immigrants, refugees and people of color, and now with the pandemic they’re being even more invisible and threatened,” said Upadhyay.

King County Executive Dow Constantine told the crowd that his next budget proposal would boost funding for education about racially-motivated anti-Asian attacks.

If convicted of felony assault, Holdip would face a punishment of 12 to 14 months in prison — a longer punishment than if he were convicted of a hate crime. In addition, a judge could increase the sentence by up to 10 years in prison, according to the Prosecuting Attorney’s Office.

Nasu addressed the crowd at the rally on the 13th, saying she was not satisfied with the potential sentence of up to 14 months, the Seattle Times reported. “Do you feel they take our safety seriously?” she said.

With increased awareness about anti-Asian attacks, some have also called for nuance in proposing solutions to the violence.

In September last year, actors Daniel Dae Kim and Daniel Wu offered a $25,000 dollar reward for information connected with an attack on a 91-year-old man in Oakland’s Chinatown in January. A suspect was arrested by Oakland police in connection with a series of alleged assaults against elders in Oakland’s Chinatown.

On February 17, a nationwide network of organizations that are led by or serve AAPIs released an open letter denouncing the anti-Asian attacks, as well as any rhetoric of criminalization and retribution that might come about in response.

At the beginning of the pandemic, communities were still “wrestling with what is the most optimal and sustainable solutions and strategies toward addressing anti-Asian violence,” said Byun of ACRS, who signed the letter. But after the killing of George Floyd and the nationwide reckoning with anti-Black racism, communities are better informed that “there are this broad array of community-based solutions that are available, besides…prosecution and increasing police presence in our neighborhoods,” Byun said.

The letter called for more victims’ compensation funds and culturally competent mental health services. It suggested solutions including a community ambassadors program to accompany vulnerable people on their way home, bystander intervention training, restorative justice, and better history curricula in schools. It called for community leaders, government agencies and philanthropy to each play a role.

“The solution to violence is not more violence in the form of aggressive and discriminatory law enforcement,” the letter continued. “Instead, we need interventions and responses that address the root causes of violence and that provide culturally and linguistically sensitive services for survivors, victims, and their families.”

Efforts like the letter are intended to address the root causes of racially-motivated violence —  “structures and institutions that are in place that advance racism, create these disparities,” said Byun. “Anything else we do that is not focused on getting to the root of that is a band-aid.”

When it comes to the types of community-driven solutions called for in the letter, Upadhyay sees hope in the Black Lives Matter protests over the past summer. “The Black Lives Matter movement made it a much broader movement for people of all color, cast or creed to join to fight against inequity and injustice,” she said.” Previously I’d see APIs having to fight on their own, African Americans fighting for themselves.”

Upadhyay worries about anti-Asian violence worsening, and about community members who lack access to news about the threat of violence. “My fear is, how do we also bring this issue to community members that are invisible?”

Byun agrees that a powerful strategy for addressing racism and inequality is to build solidarity and alliances. “How do we disrupt the structures in a way that can heal, that centers on restorative justice, recognizes that that is the main way to create lasting, sustainable solutions for communities?” he said.