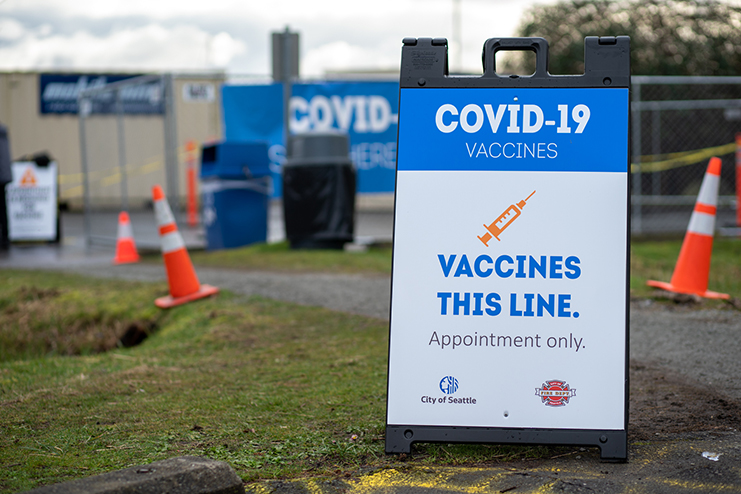 Community organizer Sokha Danh has been helping Cambodian elders get vaccinated for COVID-19. The process has been frustrating – even though he is relatively tech savvy, and knowledgeable about the workings of the City and nonprofit worlds.

Recently, with the help of a private Facebook group, Danh helped a Buddhist monk who lives in Tacoma get the vaccine in Seattle. The elders Danh helps often don’t speak English well, and may not know how to use a computer.

“I honestly don’t know how else they would have gotten a vaccine,” Danh said.

He wishes there was an easier way to get community members vaccinated, and thinks about early in the pandemic, when King County announced it would place one of its two quarantine facilities in White Center, a diverse community, near low-income housing. The lack of prior communication with the community galvanized Danh and others to organize a two-hour community meeting, where residents expressed their concerns.

“That was just a big slap in the face,” Danh said. “The county was so quick to jump at justifying a quarantine facility in White Center, but when it came down to building a mass vaccination movement in White Center, it’s taken a very long time to do it.”

The difference raises questions about equity, Danh said. “We say equity, but we don’t really mean it.”

“COVID-19 has really shown the disparity for BIPOC communities, and this has been a life and death situation for our community,” he continued.

On February 11, a coalition of organizations that serve communities of color, immigrants and refugees in King County sent a letter to County Executive Dow Constantine, raising concern about “barriers and significant inequities” in vaccine distribution. It followed an earlier letter to Governor Jay Inslee and state Health Secretary Umair Shah.

People “often shut out” of the vaccine process include those who don’t speak English, or lack access to transportation and technology, according to the letter. As a result, communities of color who are most at risk of COVID-19 are under-vaccinated, the letter said.

The Chinese Information and Services Center (CISC) serves clients who speak Cantonese, Mandarin, Russian, Spanish, and Vietnamese. “They need support in terms of language, culture and technology to be able to get an appointment for the vaccine,” said Michael Itti, CISC executive director. Itti said he signed the letter to get local leaders to understand the hurdles many BIPOC community members face.

For example, the Department of Health’s Phase Finder tool is only available in English and Spanish. And people without the technology to access it face yet another barrier to getting an appointment.

Bilingual staff at CISC are helping clients get vaccine appointments and the information they need about the vaccine. Since January, they have also worked with the Seattle Housing Authority, King County Housing Authority, Seattle Fire Department and the City of Bellevue to set up pop up vaccine events in buildings to serve older adults who are low income or disabled and may need language or technology help. Bilingual staff at CISC will do outreach with residents and coordinate the appointments.

Itti wants to see local government continue working with trusted organizations like CISC. “From the get go, I wish the strategies they’re using now had been available at the very beginning,” he said. He also wants local government to collect and analyze data about language and cultural disparities in vaccination. If the county moves to the next phase of vaccination too quickly, it will be hard for seniors and other vulnerable people to get access to the limited supply, Itti said.

The letter thanked King County for making a plan to distribute the vaccine more equitably, including putting the first two mass vaccination sites in south King County, and allowing family caregivers of their elders to get the vaccine early as well, and tracking vaccination data by race and ethnicity.

Signatories to the letter asked the state Department of Health to create its own Vaccine Finder Tool with regular updates about vaccine availability, to create a waitlist of BIPOC (Black, Indigenous and People of Color) individuals that healthcare providers can use to distribute extra doses, and partner with community organizations who can serve as trusted messengers, with cultural and language proficiency, to encourage hesitant individuals to get the vaccine.

Seattle announced February 23 that it will use a new mapping tool developed by University of Washington researchers to target pop up vaccine clinics in places they’re most needed. The data combines information rates of COVID-19 cases with census tracts that score high on social vulnerability factors identified by the CDC.

“I think that’s exactly the right strategy,” said Min Chang, CEO of Kin On, of this new push. “I think we all need to kind of pitch in if we want to get to herd immunity in our community.”

So far, the majority of people vaccinated in Seattle identify as BIPOC, according to the City. Statewide, people who are Hispanic, Black and multiracial in Washington have been vaccinated for COVID-19 at lower rates than their percentage of the population, according to the Department of Health.

In a February 17 announcement, Mayor Jenny Durkan acknowledged that mobility challenges, lack of health insurance and English proficiency are other barriers.

Sarya Soa, program manager at the Cham Refugees Community in Seattle, was another leader who signed the letter. She said language and access to technology are barriers for many members of the Cham community, a ethnic minority in Vietnam and Cambodia, which established a community center in the Rainier Valley. COVID-19 took a heavy toll on the community, Soa said.

“Just getting appointments scheduled is a large barrier already for many of our community members, especially with the lack of English,” she said.

Soa has been helping set up appointments for community members. Many got a chance to get the vaccine at a pop up clinic in Holly Park, which was targeted toward the Somali community.

Notices about upcoming vaccine pop ups aren’t written in Cham. “They have to hear it from me or somebody else,” Soa said. And it’s crucial for her or others who can translate the language to help answer questions for Cham speakers getting the vaccine, such as about allergic reactions.

Still, some members of the community would prefer to get the vaccine from their doctor, rather than a pop up.

Soa pays close attention to vaccine distribution lists via email. An opportunity to get the vaccine – via a community clinic or otherwise – will sometimes open up. It’s up to her to sign people up who need it.