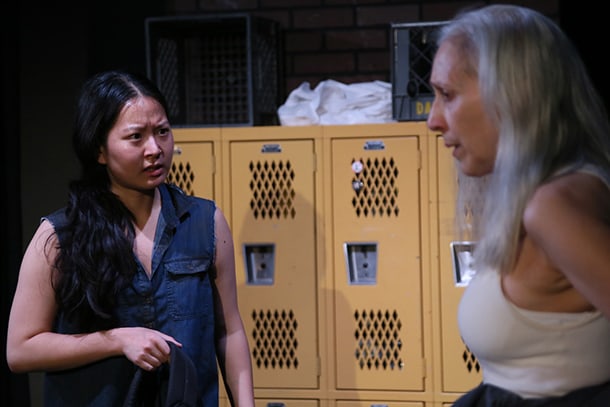 Throughout the existence of the United States of America, whitewashing history has often been lucrative work. The latest production at Annex Theatre features a story that imagines more such work in the future year 2050, in Holly Arsenault’s play The Great Inconvenience.

The characters in The Great Inconvenience are employed to revise U.S. history into a more palatable story for the wealthy, and to present these new versions to their children. But this survival job takes its toll on those who perform it.

One of the characters in this unenviable position is Beebi, played by actor Mi Kang. “She’s fire and impulsive and looking for truth,” said Kang. “Beebi lives in a world where history has been manipulated and information is not readily available; so, it’s been a learning experience trying to put together a character who is eager to learn but doesn’t have the freedom or resources to do it.”

Kang is very excited to be part of this production. “The opportunity to work with director Erin Kraft and playwright Holly Arsenault interested me in auditioning for The Great Inconvenience,” Kang said. “They’re both incredibly smart and good people, and it’s been wonderful to be in the room and collaborate with them.”

Creating theatre has long been a goal for Kang. “My first memory of enjoying theatre was when my parents took me to see The King and I when I was eight years old,” she said. “I remember watching the children in the show and being so excited to see kids that look like me on stage!”

From there, Kang took the opportunity to participate in theatre when it arose. “After watching the kids in The King and I, I thought, ‘I can do that. I want to do that!’” she said. “And luckily, I got the opportunity to be involved in community theatre a few years later.”

Just as the characters in The Great Inconvenience rely on each other for support, the communal nature of theatre has been a big draw for Kang in real life. “There are so many performers who’ve been influential in my work, but the most influential performers are the ones I’ve been fortunate enough to watch in the rehearsal room,” she said. “The best way I learn is by watching other people work, so it’s incredibly valuable to me to see first hand other performers’ processes.”

For Kang, teamwork is often the best learning experience. “What continues to surprise me in each project are other artists’ perspectives,” she said. “It’s fascinating and lovely to experience other people’s art and their view of the world because it’s always different from mine even when there are similarities.”

She sees no end in sight to these growth opportunities. “All the roles I’ve had the opportunity to play in Seattle have taught me something,” Kang said. “Whether it taught me something about myself, other people, or the world, there’s always something to be gained through the experience. I like to think that I will always learn and grow with every role.”

Community and connection continue to be Kang’s main support even when times get tough. “Being a theatre performer is my dream job, and even when it’s not perfect, I still love it,” she said. “So, the challenges that come with the job mostly feel manageable, and when I have to address them, it’s helpful and important for me to turn to the people in my support system for guidance and feedback.”

This community focus applies to Kang’s perspective about her audience, as well, she said. “I hope we cross paths one day through theatre!”