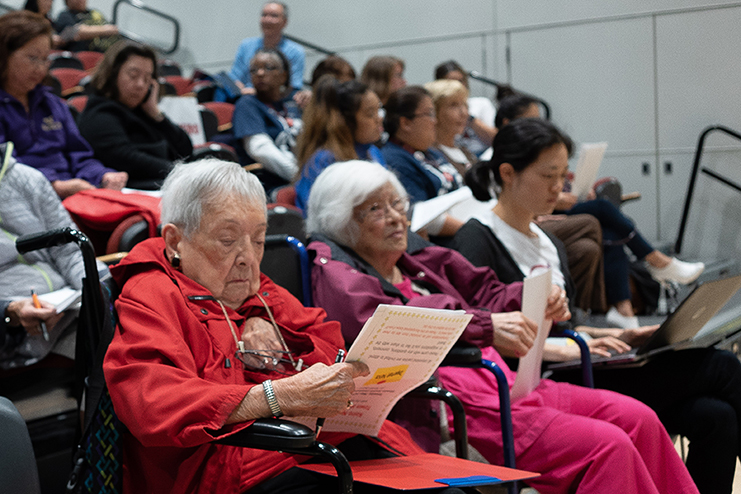 When Keiro Northwest announced May 8 that it was closing its flagship skilled nursing facility and most of its other programs, it said Nikkei Manor, its assisted living facility, and Kokoro Kai, its adult day care program, would stay open.

But the future of these programs is now uncertain after a May 14 community town hall, during which the Keiro board announced it would assess whether it can sustain Nikkei Manor and Kokoro Kai, and look into a potential partnership with another organization during a 60-day expedited due diligence period.

Within this 60 days, the board is also hoping to raise $5 million dollars to hire experts to consult on how to use Keiro’s property on 1601 E. Yesler, and fill financial gaps.

A handout distributed before the town hall made clear that while Keiro Northwest might continue as an organization, the skilled nursing and rehabilitation facility on E. Yesler will close.

This closure, which forces around 100 senior residents to find new accomodations, brought many community members to the town hall event at the Stroum Jewish Community Center on Mercer Island to voice their concerns. Around 200 people packed the room, some holding signs saying “My mother will be homeless” and “Transition trauma is real,” referring to relocation stress syndrome which can affect seniors moving to a new nursing facility. Northwest Asian Weekly reported that people had to park long distances from the center and walk.

Moderated by state Rep. Sharon Tomiko Santos, the town hall shed light on reasons for Keiro’s financial collapse and divisions among board members, almost half of whom voted to affiliate with another organization rather than close Keiro. The town hall also discussed the future of Keiro’s programs and what will happen to residents.

Keiro has been experiencing operational losses since 2011, said board member Fred Kiga at the start of the event. Insufficient Medicaid reimbursement was a large source of losses. After the recession in 2010, Washington state did not increase Medicaid reimbursement, under a policy direction emphasizing home and community care for seniors over skilled nursing facilities, according to Kiga. Regulatory changes, such as requiring 24/7 registered nursing care, also played a role, he said.

Five years ago, 70 percent of residents in Keiro’s skilled nursing facility were on Medicaid, and today, 80 percent are, according to Kiga. The costs of services now exceed reimbursement by $100 dollars per patient per day. Keiro is losing an estimated $300,000 dollars per month, and expects to be out of cash by December to January 2020.

In April 2018 at a board retreat, the Keiro board considered partnering with another organization to continue operations, but ultimately voted to close.

Keith Akada, whose mother is on Medicaid and one of around 100 residents who need a new home, questioned why the board did not act sooner, knowing the financial model was failing in 2011.

“What have you done?” Akada asked in a raised voice. “Because it does not sound like talking to one potential affiliation since 2018, you’ve done your due diligence. I’ve called 33 facilities,” Akada said, so far with no success in finding a place for his mother.

Kiga said that in 2013, the board tried to raise money, including with new adult day care and home care services and Medicaid rehabilitation beds, but that these investments were not enough to keep the organization financially solvent. In December 2018, the board tried to manage admissions and discharge process for Medicaid patients, but it was too little, too late, Kiga said.

In 2013, during a commission to come up with ideas to keep Keiro sustainable, the board realized that “the Japanese community cannot sustain Keiro anymore,” said Ted Tomita, Keiro board secretary. Keiro tried to expand its base of support to other Asian Pacific Islander communities.

“We tried,” said Julie Ann Oiye, Keiro board vice president. “We probably weren’t very well-versed in how we could do that.”

Board members said they were not aware how severe Keiro’s financial situation was until early 2018, when Keiro was losing $3.6 million dollars per year, according to Kiga. Oiye said it was only when current CEO Bridgette Takeuchi was hired that they had a clear picture of the organization’s finances.

Why Keiro did not partner with another organization

Keiro’s medical director stood to ask the board why it wouldn’t affiliate with another organization. “The mission is to take care of the patients. That’s my mission as the medical director,” he said. “And if that’s the mission, then it seems to me that if affiliation is an option, then if we can maintain the place and keep it open, why not?”

Tomio Moriguchi, Keiro board president, said even if Keiro partnered with another organization, he doubted any organization could sustainably maintain the skilled nursing facility as it exists.

The vote not to affiliate came down to some members of the board believing Keiro should be independent and keep control of its assets, Moriguchi said, and so the board did not do due diligence in exploring affiliations or partnerships with other senior living organizations.

Kiga said that at the board retreat, the board considered either closing or partnering with Transforming Age, a national not-for-profit senior living organization. Kiga said the board voted to close because they did not obtain a term sheet from Transforming Age with details about what an affiliation would mean for Keiro.

Board treasurer J-F Manina disputed this account, saying Keiro in fact never sought a term sheet form Transforming Age. “I think we may have different interpretations about what happened at the retreat,” Manina said. “We did not do the due diligence around a strategic alliance.” Manina said he and other board members felt this was a missed opportunity, and said it was ironic for the board to explore this process now in its expedited 60-day due diligence period.

Manina said he knew an affiliation would not solve Keiro’s problems, including the unsustainability of the skilled nursing program, but that it might give Keiro time for an easier, more thorough transition or closure.

Oiye also voted to affiliate, feeling it would give Keiro more flexibility. Because Transforming Age has multiple facilities in the region, she thought it could allow Keiro employees and residents to transfer between facilities if one did not fit their needs. “I also understood why there was hesitation on this,” she said. “It was not easy to make that choice.”

Tomita said he voted to close, out of concern for how residents would be treated at a different facility.

Board member Frank Fukui also voted against an affiliation, concerned about what might happen to Keiro. “For an affiliation, it’s not like you’re a partner,” Fukui said. “They take your assets, everything you own; stocks, bonds, property and those kinds of things, and for that you get one vote out of 40 people. So there’s no guarantee that Keiro will be Keiro. They may keep the name, but then the programs and all the other things that go with it could disappear.”

The board deliberated for seven hours before voting to close Keiro, Moriguchi said.

The future of Nikkei Manor, Kokoro Kai and other programs

Moriguchi said his gut feeling was Keiro needs to raise $5 million dollars. A statement posted to Keiro’s Facebook page clarified that this fundraising effort is to hire consultants to advise on how to use Keiro’s Yesler property, cover financial shortfalls, and explore a potential partnership.

According to Kiga, maintaining Keiro’s usual level of annual giving of between $400,000 and $600,000 dollars would be a factor in determining what programs could stay open.

Management is still assessing whether it is viable to continue Nikkei Manor and Kokoro Kai. According to the handout distributed to attendees, Keiro owns the Nikkei Manor building and leases the land from a Japanese American family. The board will consider whether to limit or stop accepting Medicaid patients at Nikkei Manor.

Nikkei Manor’s financial status was not disclosed at the town hall. Its 2018 financial statements are being reviewed, according to the handout. Nikkei Manor needs “a meaningful investment of capital” for upgrades to its physical structure.

As for what will happen if the money is not raised, or if Nikkei Manor will be sold, the board does not have an answer, according to the handout read.

Nikkei Horizons could continue beyond the closure and be run by volunteers, according to Jake Colter, director of community enrichment for Keiro. Management is encouraging “a committed community member to evaluate whether the program could spin-off as its own non-profit entity,” according to the handout.

What happens to Keiro and its residents

According to regulations, Keiro cannot close its nursing facility until the last Medicaid patient has a place to go. But since staff will start to be phased out, Keiro management is encouraging residents and their families to act quickly to find a new place, whether an adult family home, assisted living facility, or coming back to live at home.

Sonya Sanders, Region 2 Administrator for DSHS Home and Community Services, said DSHS will do however it can to help residents through the closure. “If at the end of the day all of the staff are gone, we have contracted with home care agencies to come in and place providers in the facilities to take care of the clients until the last client has gone,” Sanders said. “DSHS will not leave any client unattended.”

Vicki Elting, Washington State Assistant Long-Term Care Ombuds, said the ombudsman  program is available to help ensure the rights of patients are attended to, and process complaints from residents or families against long-term care facilities. Elting said they are hoping to hear from more residents.

At the end of the town hall, Rep. Santos encouraged families of residents to get in touch with the ombudsman program. “I have had the unfortunate experience of watching nursing homes close,” said Santos. “And I can tell you that the work of the Long-Term Care Ombuds is phenomenal.”

Keiro needs to raise $8.5 million dollars to close the Keiro rehab center, and the board decided it will need to sell the Washington Medical Center building it owns nearby.

Already, there is interest in the property, board members said at the town hall. A nonprofit wants to lease it. The board has been meeting with brokers, including one representing a for-profit nursing home in California.

Keiro CEO Takeuchi said they are looking for people to volunteer help, including volunteering language services, to make sure residents are comfortable moving.