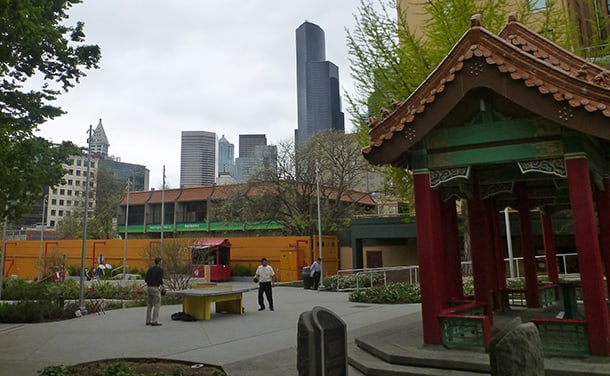 “In ten more years, when we look back at Seattle as it used to be, where will we decide we went wrong,” a friend wondered yesterday when we talked over coffee in my tiny Chinatown apartment. It was a question that refused to leave me alone, teasing at the back of my thoughts and elbowing its way into the forefront this morning.

My vote for causing the city’s tipping point goes to the Columbia Center, which upon completion in 1985 was out of place, absurdly defying Seattle’s scale of small architecture. It looms over downtown like a behemoth of darkness, and has set the standard for all the other towers that have joined it over the years. None of them can be taller than real estate magnate Martin’s Selig’s scar on the city.

Traditionally, Seattle’s downtown was a center for a multitude of neighborhoods, each of them its own cozy community. After six at night, there was scant activity in the city center and the little that flourished was mainly provided by travelers staying at the hotels. The Olympic was the kingpin, giving a touch of grande luxe magnificence to an unpretentious city, with the nearby Fifth Avenue Theater and shops in Rainier Square buttressing that luster.

For years, the most coveted experience in Seattle was dinner at the Georgian Room, a night at the theater, and a cocktail at Shuckers before going up to one of the Olympic’s Belle Epoque suites. A stay at the Olympic guaranteed its guests a night or two of life in the reincarnated form of Diamond Jim Brady.

But as a rule, Seattle residents went home after work, to small bungalows in Ballard, Wallingford, Green Lake and a score of other small towns that combined to form a city. These were self-contained communities where many of the inhabitants went downtown only when they had to – and except for work, they rarely needed to. In the neighborhoods were supermarkets, bookshops, movie theaters, bakeries, diners and taverns. Each area was distinctive: Fremont was the bohemian turf of hippies and bikers, Ballard was a Nordic fishing village, Wallingford resembled the sort of town Ozzie and Harriet should have lived in. None of them were destinations, except for Green Lake with its Olmsted-designed park and the zoo.

Seattle’s downtown has become the most desirable address in an exploding city, and beyond its borders, the sweet little neighborhood bungalows are being torn down and replaced by micro-apartments and condominiums. A place that delighted in being quiet and unobtrusive is going through an urban revolution and when it’s over, who knows what will still be standing?

I live in what was the most overlooked neighborhood in the city – until now. Although Pioneer Square is where tourists flock to see the original Seattle of the 19th century, the Chinatown-International District is the place where residents still live, shop, and go out to eat in the buildings from that era.

Too poor to have excited commercial interest for over a hundred years, now this section of town has become a Mecca for developers and soon hotels and condos will dwarf whatever is allowed to remain.

Many of the old buildings here still sport “ghost signs,” a precursor to billboards where advertisements were painted directly on the brick walls. “Dancing, Chow Mein, Chop Suey” one of them continues to invite, while the building I live in proclaims, “U.S. Hotel, Rooms 50 Cents.” They’ve stood solidly in place since the 1900s and some perhaps even before that, through fire, earthquakes, economic depressions, boom times, but they haven’t been “retrofitted.” If they aren’t soon threaded with steel girders or other reinforcements, they will come down and with them goes a significant part of Seattle’s history.

One hundred years before the Columbia Center building opened, in November of 1885, a mob of 500 Tacoma citizens forced the (approximately) 700 Chinese residents of that city to leave and then burned their homes and businesses to the ground. A few months later in February of 1886, martial law was declared in Seattle to stop mobs from forcing the Chinese residents, who were at that time 10 percent of the population, onto steamships that would remove them from the city. Although officially Seattle repudiated the expulsion, the number of Chinese soon dwindled from over 900 people to a handful, “a few dozen, at most,” says historylink.org.

But those remaining residents kept Seattle’s Chinatown alive, to become a place for people from all over the world, as well as a refuge for artists, writers and musicians. It has led to the creation of Little Saigon with its bounty of Vietnamese businesses and it encompasses a corner that’s still Nihonmachi, Japantown.

Elderly Chinese ladies and colorfully dressed women from African countries fill the streets every morning, taking their children to the school bus, buying groceries, meeting to chat with friends and play cards in Hing Hay Park.

It’s a community of pedestrians who walk to the library, the post office, the neighborhood health center, to one of the many restaurants.

Lion dancers bring their drums and gongs to announce the Lunar New Year and the sidewalks are carpeted with the scarlet petals of exploded firecrackers for days afterward.

Tai Tung has fed the community and visitors Chinese-American food since 1935. A more recent arrival, the Eastern Cafe, serves espresso and crepes in the Eastern Hotel building, a place dating from 1911 that once housed the Atlas movie theater (which closed as the Kokusai Theater in the 1980s).

Floating through it all is the smell of roast pork from whole pigs cooked in gigantic, ferociously hot ovens at Asia Barbeque, the light sweetness of fortune cookies baked at Tsue Chong’s factory on Eighth Avenue, and the fragrance of layer cakes that drifts down the street from Yummy House Bakery.

Chinatown-International District is more than a neighborhood. It’s a triumph of culture and history. It’s an example of what an urban village can be. And it’s possibly doomed, definitely threatened.
We all claim milestones based upon our own personal experience, where we were when Kennedy was shot, what we were doing when the Towers fell on September 11. We measure change with alterations in our own private worlds, so for each one of us, Seattle’s turning point will be an individual opinion. For me, it came in 1985 when Martin Selig’s black skyscraper overtook the Smith Tower as the primary landmark of Chinatown’s city view, its long shadow falling on what is now seen as under-utilized real estate, ripe for development.

Someday perhaps, it will all have been worth it. I doubt it. But then I have skin in this game. I’m losing my home of 12 years to the gentrification of a community that has survived against all odds until now. Goodbye Chinatown. Hello Metropolis.

Janet Brown has lived in the CID since 2005. She has written four books while living in the International Apartments. She is a Mak Fai Lion Dance Troupe groupie and a passionate devotee of King Noodle.