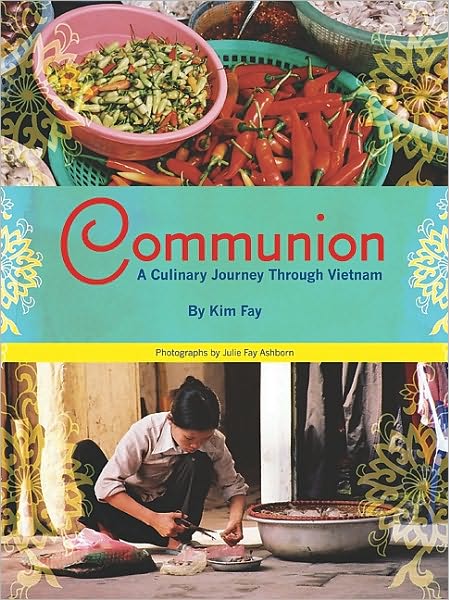 When author Kim Fay’s book, “Communion: A Culinary Journey Through Vietnam”, arrived in my mailbox, ‘foodie’ that I am, I attacked it with gusto, salivating in anticipation. Happily, the book was easy to ‘digest’ and left me, as often occurs after a fine meal, longing for more.

One-time Northwest native Fay, who now resides in Los Angeles, spent four years in the mid-90s working and traveling in Vietnam. Motivated by “the adventure of living in an exotic country” and plans to write a novel, her first year was spent teaching English grammar at a French colonial high school in Ho Chi Minh City (formerly, Saigon). Later, living expenses were covered by writing for local magazines and newspapers, in the nation of over 83 million people, the majority of whom are Buddhist.

According to Fay, “food nurtured every aspect of my life in Vietnam. It cradled my relationships, not only with people, but also with the country . . . . ” It wasn’t until after her return to the U.S. that she decided to journey back to the humid land of happy, hunger-fulfilled memories. The call of a cuisine that had so informed and shaped her perceptions of the country now lured her, 10 years later, back to the familiar kitchens, food carts and market stalls of the one-time French colony, to learn to cook the dishes to which she had become so physically and emotionally connected.

With a bounty of Vietnamese restaurants that provide food for the 1.6 million Vietnamese and Vietnamese Americans living in the U.S., one would think Fay could have easily satiated her appetite for banh hoi, bun cha and pho — as well as the signature fish sauce nuoc mam). But, Fay laments, even with the super abundant options in L.A.’s Little Saigon — home to the largest concentration of Vietnamese outside of Southeast Asia — nothing quite met her standards of craving for the dishes “that caused (her) to fall in love with Vietnam.” She was intent on learning to master the cuisine — to make it an integral part of her home kitchen — ending the need to restlessly roam the restaurants in search of the meals of her dreams.

Accompanied by sister Julie, as photographer/companion, a sheaf of contacts past and present, and the growing desire to learn more about the food, culture, traditions and people of Vietnam, Fay set out on a five-week culinary journey from Hanoi to Ho Chi Minh City.

“Communion” is the final plating of her foray into the food finding road trip. Well beyond tofu, dumplings, and the holy wok trinity of basil, coriander and mint, the author opens the palate to not-often-found dishes on local U.S. Asian menus, such as Banana Flower Salad, Caramelized Clay Pot Fish and Dalat Ragu.

While there are recipes in the book (ten in all), “Communion” is more than just a book of recipes. It focuses on a variety of related topics, with food its common denominator. Fay visits with famous chefs, e.g., the Julia Child of Vietnam, and ordinary home cooks, like her adopted Vietnamese mother. She talks with those who fish, farm and produce the products eaten in the socialist state and beyond. She investigates how history shapes cuisine and food, and ponders the relationship between food and happiness. She sheds light on the regional variations in Vietnamese food and dishes; and talks with expatriates who share their content in a newfound homeland.

For the hardcore cuisine-addict, the book is nicely seasoned throughout with savory food related quotes. Jean Anthelme Brillat-Savarin: “Tell me what you eat and I will tell you what you are.” Virginia Woolf: “One cannot think well, love well, if one has not dined well.” James Beard: “Food is our common ground, a universal experience.” She excluded one of my personal favorites — Miss Piggy: “Never eat more than you can lift!”

In “Communion”, Fay photoshops her experiences with words that bring digital immediacy to the near photographic descriptions she uses — a hallmark of her ability to craft an unforgettable book, creating for the reader a visual picture of Vietnam that one can virtually feel, hear, taste and smell.

“Communion” is a book one can treasure on many levels: for its focus on food and cuisine, for its informative perspective on a nation whose history will forever be tied to that of the U.S., and for an appreciation of a culture and people that continues to remain largely unfamiliar to a majority of Americans.

6 children’s books explore courage, imagination, and the secrets of the universe

Colder Than Ice, Hotter Than A Flying Bullet