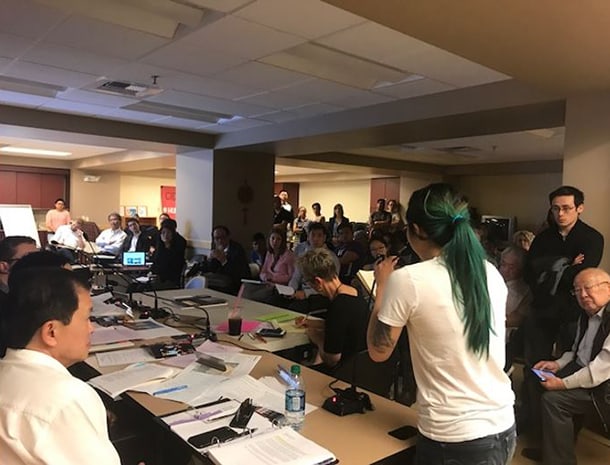 The International Special Review District (ISRD) board met on May 23 in the Bush Hotel. About 80 members of the public attended to express their thoughts about an upcoming 14-story development in the neighborhood. The 230,000-square-foot project is located at 616 8th Avenue S and will comprise seven floors of hotel space, six floors of apartments, two floors of condos and three floors of below-grade parking.

Throughout the evening, community members discussed how historical, political, class-based and racially complex forces collide in Seattle’s land use decision making processes. For over two hours, volunteer design review members and community members engaged in a contentious meeting. The outcome of the hotel project is unclear, but the organizers’ efforts have already shifted the conversation, and will surely have an impact on the future of land use in the Chinatown-International District (CID).

The history of the CID is deeply connected to the history of land use rights and wrongs in Seattle. For generations, activists from communities of color have fought for cultural resiliency in the face of land use decisions that often seem intentionally confusing. Long ordinance numbers, indecipherable acronyms, and jargon-filled discussions serve to further exclude many people from helping shape the future of their communities.

The Chinatown-International District contains a National Historic District on the National Register “to promote, preserve and perpetuate the cultural, economic, historical, and otherwise beneficial qualities of the area, particularly the features derived from its Asian heritage,” according to the City of Seattle. The ISRD is comprised of volunteers and led by a staffer from the Seattle Department of Neighborhoods. The ISRD may be limited in its scope and authority to deny a permit to the 14-story development. One speaker pointed out that the authority for final review comes from Department of Neighborhoods Director Kathy Nyland.

Highlights from the design presentation:

A design presentation from Studio19 Architects focused on the location for the parking lot entrance, a shadow study, a list of community organizations they had connected with, and the building’s exterior texture and color. They faced interruptions from organizers who were upset about the term “Asian aesthetic.” The International Examiner reached out to Studio19 Architects for slides from their presentation, and to ask follow up questions, but received no response.

In December 2016, Cynthia Brothers, an activist with the CID Coalition, wrote an article for the Seattle Globalist about the new proposed 14-story development and its possible impacts on the neighborhood. The piece, titled “Will Grandma have a place in the new Chinatown-International District?” was intended as a call to action. The group “Humbows Not Hotels” formed shortly afterward. Now called the CID Coalition, the group is engaged in extensive community organizing and lobbying efforts to shift the city’s policies around land use for communities of color. They have identified the project at 8th and Lane as a symbol of development done wrong.

“It is imperative for us to preserve the cultural heritage of our community, otherwise it will simply turn into a taste of the exotic for people who do not share our values and are not invested in our community,” said Arista Burwell-Chen, a neighborhood resident and activist with the CID Coalition.

Abby Lawlor, Strategic Research for Unite Here! Local 8, asked: “Who will work, live and visit the neighborhood? Will the jobs created from this hotel go to people in the neighborhood?” Activist Omari Tahir-Garrett spoke of “gentrification as genocide” and drew parallels to the fights for Africatown. He warned that CID would face the same pressures if they don’t do something “before it is too late.”

The ISRD board members expressed concerns about the pedestrian experience, community safety, and suggested changes to the opacity of the hotel restaurant’s kitchen. Board members faced interruptions to normal proceedings from those in attendance.

With 50 projects in the pipeline and Mandatory Housing Affordability (MHA) legislation under review for the CID, the Seattle City Council may consider amendments to increase the authority of the ISRD board for future projects. The developer of the project on 8th and Lane hopes to begin the project this summer, with the hotel likely to be a Springhill Suites Marriott. The CID Coalition is asking for the project to be denied, an impact study to be completed, a moratorium on market rate development, and a public hearing before the ISRD makes its final recommendations.