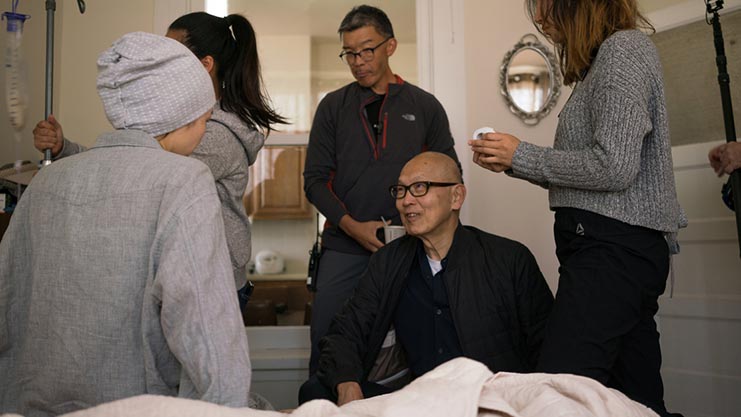 Coming Home Again is acclaimed director Wayne Wang’s latest film about a Korean-American family, based on a short personal essay in The New Yorker by award-winning writer Chang-rae Lee. Perhaps best known for The Joy Luck Club and Chan Is Missing, Wang’s newest film is a stark departure from the hustle and bustle of his previous works. It is restrained and quiet as he hones in on a mother and son’s complicated relationship.

I caught up with him to learn more about the film and his vision for the future of Asian American cinema. Here is a brief excerpt from our conversation, edited for length and clarity.

IE: Many of your films feature food as a key unifying element. This is something that almost all Asians and APAs can identify with. What was different for you about the role of food in this film?

Wayne Wang: Well, first of all, there’s not much story in this film. The only story actually takes place in one day, on New Year’s Eve, where the son tries to prepare a dinner for the family in the same way that the mother always prepared the dinners for the family. So it’s really about a process more than a story or any drama. So the food becomes the key everything. Actually, we pretty much show the preparation, the cutting, the spices needed, the sauces needed and the cooking process itself with all the dishes. So it’s really about the cooking of the food and through the cooking of the food, the son remembers the memories of love and hate, love and frustration, whatever memories he has with the mother.

IE: Why did you decide to make this film at this time?

I read the short story in 1995 or later in the 1990s and I got to know Chang-rae Lee because I was working on an adaptation of his book A Gesture Life. I re-read it off and on through the years and then my mother got sick maybe six or seven years ago and I went back to that short story again and it meant even more to me. But I didn’t have the kind of elements needed to make it at the time. [Don Young from Center for Asian American Media] told me that his grandmother passed away and she left an apartment that’s full of her spirit and her things. I went to see it and I could just feel the spirit of the grandmother there. And I just said, “well, let’s pull some small budget together and a small crew and just make Coming Home Again.”

So everything just fell into place. A lot of times films happen that way, especially independent films. You know, you try really hard, but it never happens but then sometimes something goes right and everything is just there and it just happens.

IE: You mentioned in your Director’s Statement portrayals of Chinese Americans and Asian Americans on screen haven’t really changed over the past 25 years since The Joy Luck Club. Do you think that that is going to change given Black Lives Matter and given the push in general towards more diversity, more representation, on screen?

I think Black Lives Matter is all really good. And it comes because there’s a lot of pressure from the Black community and especially in the industry.

But Asians are not really pushing. I haven’t felt that or seen that. […] First of all, there’s not enough of us. And two, we’re really not pushing hard enough – nobody is coming out and saying anything. Everybody [thinks], “Oh yeah, we’re okay…Crazy Rich Asians is out there.”

For me, the way I express my frustrations is to try to take whatever money we have, whatever situation we have, to make these small films. […] And I think to keep being able to do things like this helps, you know?