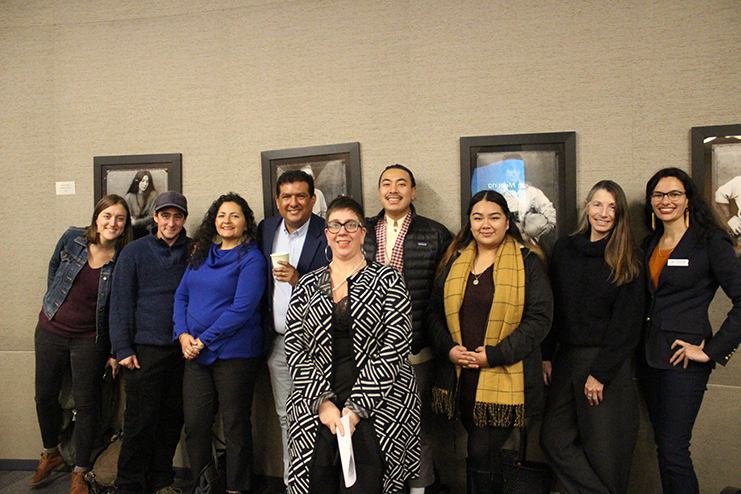 This adoption marks the culmination of over two years of community collaboration between the Port Community Action Team, made up of South Park and Georgetown residents and the Port of Seattle, bringing the two closer toward institutionalizing the voices of the Duwamish Valley into Port of Seattle processes.

The roots of this latest milestone lay in a U.S. Environmental Protection Agency Environmental Justice grant that funded efforts to strengthen engagement between the Port of Seattle and near-Port communities that have historically suffered from negative environment impacts.

Since the turn of the 20th century, the residents of the Duwamish Valley have borne the brunt of these inequities, beginning with the Duwamish Tribe.

South Park and Georgetown are home to Seattle’s only river, the Duwamish River. Its cosmetic reconfiguration took place in order to accommodate the city’s industrial growth, resulting in a straightened and dredged Duwamish River open to ships.

This change decimated the fishing and shellfish stock, rendering the river delta uninhabitable for the indigenous people whose diet depended on it for sustenance.

These changes in the natural landscape marked the beginning of how environmental changes negatively impact marginalized communities in the Duwamish Valley.

The Cumulative Health Impacts Analysis (CHIA), written by Just Health Action and the Duwamish River Cleanup Coalition/Technical Advisory Group in 2013, found that “a range of health exposures and impacts disproportionately affect people in the Duwamish Valley, an area with the greatest number of contaminated waste sites, poorly built environment characteristics, and severe air pollution compared to the rest of Seattle. Life expectancy in the neighborhoods of Georgetown and South Park is up to 13 years shorter than wealthier parts of Seattle.”

A need to address these findings birthed a pilot project between the Port and the PCAT, also focusing on economic accessibility for the community.

The Duwamish Valley has a large population of Latinx, Somali, Vietnamese and Khmer residents and is one of Seattle’s poorest neighborhoods.

“There are families that don’t have the finances to have one of their youth not work,” said Magdalena Angel Cano, a 21-year old South Park resident and the youngest member of the PCAT. “I know families that [have] their children work for cash, like at their parent’s job. So bringing in money to the house is really important for some of the families, and they live off of it. Having paid opportunities is really important.”

She continued, “Many times at home, immigrant families or refugees, we don’t have the same opportunities as other youth that have parents that have graduated from college or even high school.”

She was part of the first graduating class of the Duwamish Valley Youth Corps. Since then, she has gone on to take on many leadership roles in the community.

Magdalena understands first hand the impact that economic access through youth programs has had on her life. “I think having community leaders and having programs to get involved kept me out of the streets and gave me the opportunity to have an internship to volunteer and to just get the hang of what I wanted to get done in my life,” she said.

Among the many strategies of the collaboration, youth engagement was an essential component of the pilot project.

The Duwamish Valley Youth Corps was tapped to help facilitate a workshop designed to create access for youth to the Port’s Youth Internship Program through resume building and career readiness. Since 2018, 17 youths have worked for the Port. In addition, the PCAT helped drive collaborations in other career pathways projects, environmental impact studies with the Northwest Seaport Alliance, and community enhancement projects such as the Duwamish River Mural Art.

As the pilot project neared its end, the Port of Seattle and the PCAT sought to continue its partnership.

On May 28, 2019, port commissioners unanimously passed a motion that established the Duwamish Valley Community Equity Program (DVCEP), formalizing the collaboration between the Port and Duwamish communities.

In the following months, the PCAT and the Port of Seattle began collaborating on what would become the Duwamish Valley Community Benefits Commitment.

The DVCBC sought to create a framework for continued collaboration through three conduits:

Over the past four months, the PCAT led outreach efforts to ensure that the DVCBC be centered on community voices. They engaged community stakeholders on their terms by taking the outreach to their space. Meetings, presentations, and one-on-one conversations through culturally competent and language access lenses were ways in which the PCAT sought to receive information on what the community felt collaboration should look like.

“We’re not only collecting input from folks when we engage, we’re trying to build community,” said Bunthay Cheam, a 29-year South Park resident and PCAT member, who alongside Magdalena Cano, helped lead a Multi-lingual Boat Tour of the Duwamish.

The Port of Seattle has previously offered a mult-lingual boat tour of the Duwamish River and parts of Elliott Bay. As part of its outreach strategy, the PCAT helped lead the design for a fall boat tour centered on the pillars of the DVCBC.

“For many of these residents, this is the first time they have been engaged in this way so we want to make sure they have a great experience engaging in community and that they also understand the work the PCAT and the Port is doing and, more importantly, that we understand and hear them,” Cheam said.

The creation of the DVCBC has also fostered unity from both sides of the Duwamish within the PCAT.

Hannah Kett, a South Park resident and PCAT member, echoed those sentiments. “What I value so much about collaborating with the Port Community Action team is that we all bring such a diversity of perspectives about South Park and Georgetown — but they are all positive,” she said. “While we do not shy away from the challenges that face us around pollution, safety or displacement, we are fiercely proud of the beauty and richness in the neighborhood. We bring that into the collaboration with the Port of Seattle, and find ways for the Port to fall just as much in love with the Duwamish Valley as we are. These different perspectives are evident in the final product of the Community Benefits Commitment.”

In all, over 300 community stakeholders and 27 community-based organizations were engaged through outreach for the Duwamish Valley Community Benefits Commitment.

“We started this project two years ago, and you didn’t know a lot about us and we didn’t know alot about you…The work is done, but it’s just beginning in a lot of ways,” said KC Steimer addressing port commissioners during testimony in support of the DVCBC.

Next on the list for the PCAT and Port of Seattle is to construct a work plan that would put the priorities outlined in the the DVCBC into practice.

The PCAT will also begin drafting bylaws as it begins to create more capacity towards serving the community even further.

In her last public meeting as a Port Commissioner, Courtney Gregoire, during a special recognition period in honor of her service, ended her speech by reflecting on the culture of community building at the Port during her seven year tenure. “Actually, what’s emblematic of it is the Duwamish project, that is about going and saying, ‘we don’t know everything.’ Let’s build a community to work together for where we can make a partnership that’s meaningful. That to me is the change in culture in seven years. So, I know it was driven bottom up it’s never driven top down, but thanks for letting me be a little part of it.”