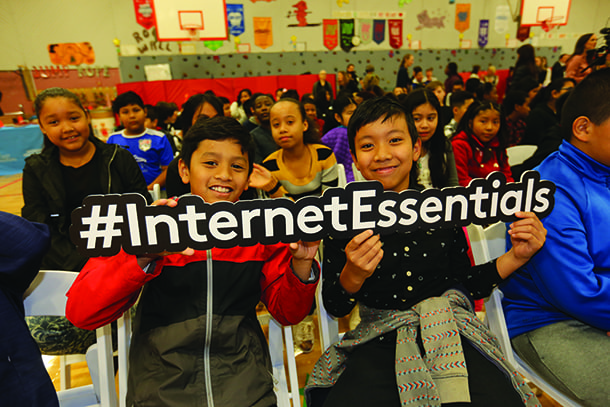 At a morning assembly at Beverly Park Elementary School, some 150 fifth and sixth-graders received a surprise: A laptop for each of them.

The surprise came after the kids sat and listened to a presentation about Comcast’s Internet Essentials from David L. Cohen, Senior Executive Vice President and Chief Diversity Officer at Comcast. Over the past seven years, the Internet Essentials program has helped provide affordable internet access to more than six million low income Americans.

Among families that earn less than $35,000 per year, only 56 percent have broadband service at home, according to the American Community Survey. By comparison, 92 percent of households making more than $75,000 per year are connected. The disparity in internet access is known as the digital divide.

At Beverly Park Elementary School, 89 percent of students are eligible for free or reduced school lunches, a common measure of poverty.

“Lots of kids tell us they don’t have a computer or internet,” said Robin Lamoureux, Principal of Beverly Park Elementary. “It’s embarrassing for a child to say ‘I don’t have internet’ to their teacher.” As a result, says Lamoureux, “we’re not able to assign the kind of learning projects that we think kids would benefit from in a world like ours today when some kids don’t have access.”

At the assembly Cohen announced that Comcast will be providing a grant to the Highline Schools Foundation to support district-wide STEM initiatives in the classroom to help students become tech literate.

From the beginning, the Internet Essentials program has partnered with Highline and other school district that serve low income populations, said Terry Davis, director of external affairs for Comcast Cable. David said the Highline Schools Foundation told Comcast that Beverly Park Elementary was especially in need of help, as it struggled with student grades and test scores.

“Fifth and Sixth graders are on the verge of making that decision, whether they continue with their education or not,” said Davis. “This will be a great way to capture a good message of, we believe in you.”

U.S. Olympic gold medalists Jocelyne Lamoureux-Davidson and Monique Lamoureux-Morando (no relation to Beverly Park Elementary principal Robin Lamoureux), twin sisters who are Comcast’s ambassadors for the company’s corporate values initiatives, were there to deliver that message.

“Having access to internet, I think, allows you guys to dream big, and it allows you to never put limits on what you think you can be,” Lamoureux-Morando told the students.

The sisters shared that growing up, the household had to share one computer between the sisters, four older brothers, and their father who needed it for work. It was difficult for them to get assignments done properly.

Lamoureux-Davidson asked the group of kids how many of them played sports or did extracurricular activities. Almost all of them raised their hands. “Internet access is really important to be successful in school to reach your full potential in school, and it’s a tool to be able to do the other things you love,” she said. “So for us we loved playing hockey and sports, but we had to take care of school first, and we needed the internet and a computer to do that.”

At the end of the assembly, Cohen broke the news: Every student would be getting a laptop. The kids erupted with cheers and excited chatter.

As the kids lined up to receive a box, principal Lamoureux was hopeful about the potential for the gift. “Learning doesn’t stop at 3:45, and this is a way that we can extend learning and the kind of learning that kids need to do past the school day,” she said. “It levels the playing field, because so many kids do have it, and what about those that don’t? Everybody deserves the right to have access to information in a global world like ours.”