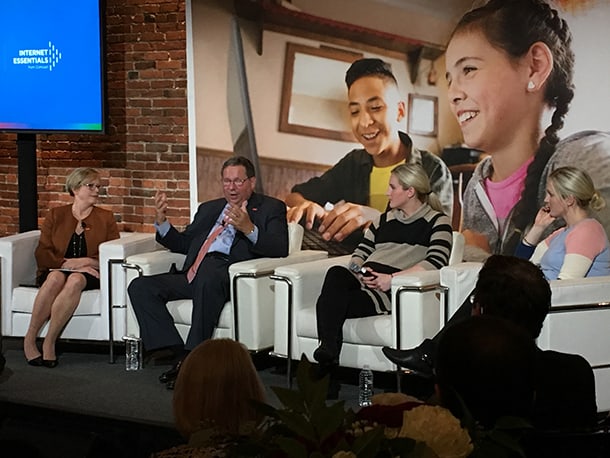 Comcast hosted a panel in Pioneer Square’s Axis on October 10 to say that it is addressing the digital divide in Washington through the Internet Essentials program. Panelists included Comcast executives David L. Cohen and Marianne Bichsel along with spokespeople Monique Lamoureux-Morando and Jocelyne Lamoureux-Davidson, sisters who were Olympic Gold Medalists on the U.S. women’s hockey team in the 2018 Olympics.

The Seattle event focused on the success of Comcast’s program and nonprofit partners in bringing the internet to over 260,000 in-need residents across the state. Comcast’s Internet Essentials is a research-based program designed to address the digital divide. The program bundles low-cost internet with the option of purchasing a heavily discounted computer and a suite of digital literacy trainings.

At the event, Cohen highlighted the program for the more than 50-person crowd of community leaders and nonprofit representatives. The Comcast diversity boss begins with some background on Washington’s digital divide, including that a third of households earning less than $35,000 are not connected to the internet. While the program has seen success in rising adoption numbers, the main barrier to broadband adoption is a lack of digital literacy skills.

Daryl J. Campbell, president and CEO of Goodwill, agrees. “The digital divide is one of the most understated but prevalent barriers in the world,” said Campbell. The nonprofit is partnering with Comcast in Washington to help bridge the divide. Goodwill is one of the nonprofits benefiting from Comcast funding for a digital literacy curriculum. The cable giant also supports buying state of the art technology for classrooms training students on digital skills.

“We applied it to all of the programs across our offerings,” said Campbell. “We are talking to Comcast as we plan to expand our partnership with them.”
The nonprofit partnerships are key to the success of the Internet Essentials program, which is mainly promoted through word-of-mouth. Nonprofits have unique access and ability to serve populations in need of this program.

After thanking the partner organizations in the room, Cohen introduced twin sisters Monique Lamoureux-Morando and Jocelyne Lamoureux-Davidson. The two join Comcast with newly minted Olympic gold medals to help spread the program’s message and be a voice to address inequality. Additionally, the twins are an inspiration to many young women and students in the U.S. who would benefit from Internet Essentials.

A 2017 report from the City of Seattle Department of Information Technology identifies that a lack of access to the internet leads to missed development opportunities for students and to fewer career advancement opportunities as adults.

As schools start incorporating digital tools into curriculum, the digital divide is larger for students without the tools to succeed like computers and hard drives.

Mary Do who was in the audience at the event excitedly e-mailed her daughter’s teacher during the panel to say that she was at the Comcast event.

Comcast had been at her daughter’s school, Beverley Park Elementary School, earlier that day where the Internet Essentials team handed out over 150 laptops to students. When Do received an earlier e-mail subjected “computers” from her daughter’s teacher, she expected another request for funding instead of a congratulatory message on the Comcast give-away.

“The school is always holding fundraisers and looking for ways to provide new tools and opportunities to the students,” says Do. “The challenge is that students cannot turn in their homework, there is a lot of work that’s happening on Google Drive and other platforms.”

The twins were at the elementary school leading the computer give-away to 5th and 6th graders with Cohen.

“My favorite give-away so far because of the reaction,” says Monique Lamoureux-Morando. “Some were crying, others were praying in the back because they know this program and give-away can change their lives.”

The cable giant’s program has connected more than 6 million low-income individuals to the internet. Comcast expects to further grow that number with the addition of low-income veterans to the list of eligible program beneficiaries. There are about 60,000 veterans across Washington who can be served.
Comcast is partnering with Bunker Labs in Seattle to help spread the program to low-income veterans. The nonprofit peer-learning environment for veteran entrepreneurs has received a grant of $21,000 from the cable giant to help boost digital skills and internet access.

The panel’s conversation and celebration is a chance to reach more communities in Seattle and surrounding areas to continue the work in closing the digital divide. Washington is the eighth largest state to adopt Internet Essentials by the numbers, over 65,000 households have been connected, according to reports provided by Comcast. The cable giant has invested $251,000 in grants to Seattle nonprofits in 2018.

“A lot of people were skeptical when we started the program, years later the price is still $9.95 and the speed has improved,” said Cohen. “Comcast plans to continue improving and promoting the program.”