On Monday, July 28, I and two retirees locked ourselves to the train tracks at Tesoro’s Anacortes Oil Refinery, blocking at least one oil train for five hours.

The previous Thursday a train transporting explosive oil from North Dakota derailed in Seattle, on its way to the refinery. By sheer luck our city avoided joining a growing list of oil train disaster zones. Almost exactly a year before our brush with disaster, a runaway oil train derailed and exploded in Lac-Magantic, Quebec, destroying the downtown core. Forty-two bodies were found and five people were completely vaporized.

Communities around the country were caught unprepared by this new threat.

Oil-trains only started running through the International District in 2012, bound for Washington refineries. Nationwide the number of oil tankers traveling the rails has leapt from 9,500 in 2008 to over 400,000 in 2013.

All this new oil on the rails comes from the recently booming Bakken fracking fields in North Dakota. Judging by twinkling lights on satellite images, you would think a city the size of Chicago has sprung up on the Dakota plains. But those lights are hundreds of flares constantly burning off volatile gas from the top of wellheads. Last year, North Dakota surpassed Alaska to become the second leading oil producing state in the Union.

Facing a dearth of pipelines, the railroads are the only way to move oil to market and keep the pumps flowing. Accidents and disasters have followed suit—more crude oil was spilled from rail cars in 2013 than in the previous four decades combined. The year since Lac-Megantic can be measured by derailments and disasters, in Alabama, North Dakota, Philadelphia, and Virginia.

With every disaster and near miss politicians express outrage and point fingers, while regulators issue half measures and promises for safety down the line. While this goes on the number of explosive trains running through our communities steadily increases. About 12 run through the International District every week. Once construction is complete on a rail terminal at the Phillips 66 refinery in Ferndale District, residents could see three per day.

Tired of watching politicians play the blame game while construction continues on new projects, we decided to lead by example and take the action we could. For us that meant locking ourselves to barrels filled with concrete and keeping at least one explosive train off the rails for a day.

We did not take the decision to risk our bodies or our freedom lightly. But faced with the most potent expression of the violence of the fossil fuel industry we needed to take a stand. 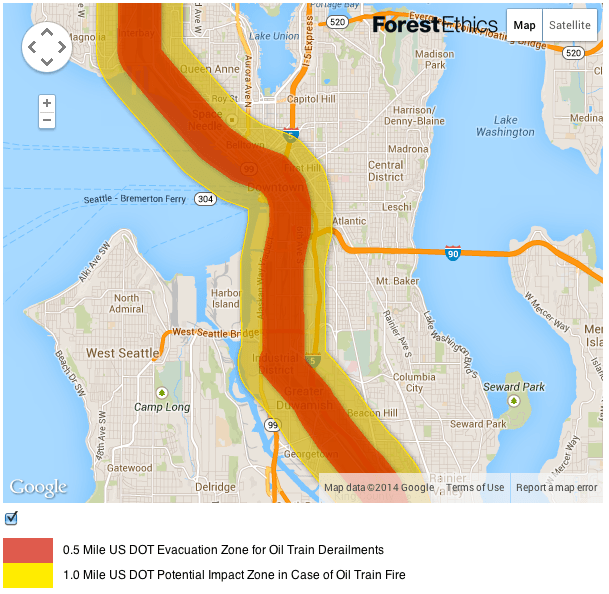 A graphic created by the environmental group ForestEthics shows huge swathes of Seattle, including most of the International District, within the 1-mile blast radius of a crude tanker. The image produces predictable outrage in almost everyone who sees it. How could the industry put so many at so much risk?

But is it really so surprising? The fossil fuel industry’s entire business plan is based on causing catastrophic climate change. Right now the industry holds five times the safe amount of carbon in reserve. As they keep promising to investors, the industry plans to burn those reserves whatever the consequences.

While oil-trains pose severe risks, they pale in comparison to the devastation of climate related disasters already happening. The thousands killed in Typhoon Yolanda or the millions displaced by Pakistan’s 2010 flooding are just the new realities of doing business for an out of control industry. As a Pakistani-American, the child of an immigrant, I am constantly struck by the interconnectedness and injustice of the climate crisis.

The threat to communities here in North America should be a wake up call, a reminder that these are extreme times. We’re living in the hinge decade; we are the first generation to see the suffering brought by climate change and the last generation who can do anything about it. It’s time for action, not just words.

The most important action we can take is halting the extraction of extreme energy. If all the oil in the Bakken is extracted, Hurricane Sandy and this year’s record wildfires will be a portent of coming disaster. Our forests will burn and our cities will flood. In the past year we’ve heard a lot of talk about “rail safety.” But there’s a simple truth; the only safe thing to do with this oil is leave it in the ground.

As we kick the fossil fuel industry to the curb we’re going to need a transition to clean energy. Governor Jay Inslee recently introduced a proposal for a Washington State “Clean Fuels Standard.” But how are we going to refine “clean fuels” if new rail terminals tie our refineries to extreme energy like Bakken oil. Even worse, Tesoro has announced plans to purchase thousands of rail cars capable of carrying Alberta Tar Sands, the dirtiest, and most climate intense fossil fuel on the planet.

If we care about our climate, our communities, or our future, we have to make a stand here by demanding a rejection of any new fossil fuel project in the Northwest. The Pacific Northwest could be a thin green line, holding back a veritable flood of dirty fuels, and paving the way for a just transition to clean energy.

Around the country, a growing movement is doing just that by physically resisting the fossil fuel industry’s plans. This month another track blockade stopped oil-trains at a Portland facility. And dozens of residents stopped construction on a fracked gas pipeline in Vermont. In Utah, 21 people locked themselves to equipment to stop the first ever U.S. Tar Sands mine. One week later and mining operations are still stalled.

They wouldn’t call it a struggle if it were easy. But inaction is not an option and time is short.

If you feel the same way, contact us and get involved at [email protected] You’ll be in good company.