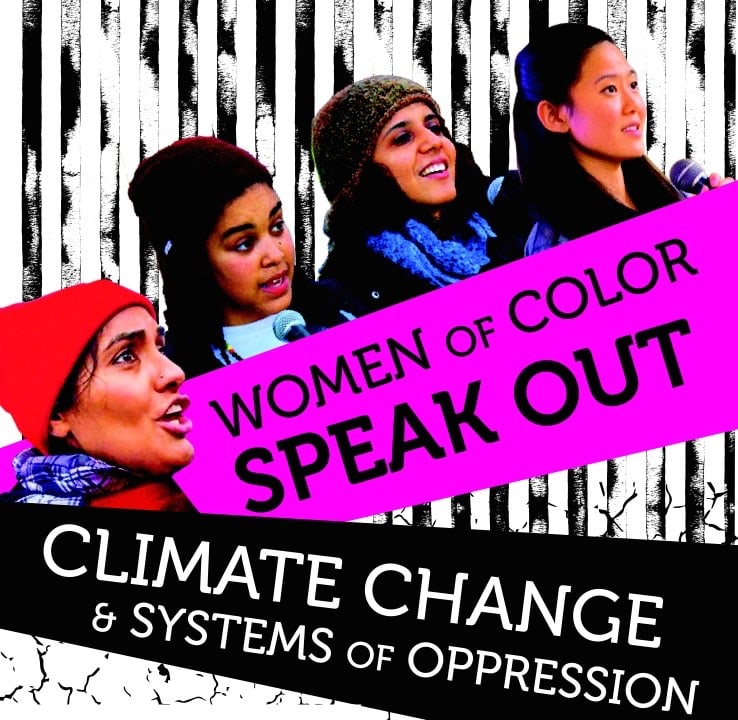 The First Nations are the original environmentalists, herbalists, botanists and permaculturalists. They are the stewards and caretakers of this land before colonialism and capitalism created climate change. Before we murdered 3,000-year-old growth trees and justified our destruction as a measure of Gross Domestic Product. Before we built a fossil fuel dependent infrastructure for false perception of infinite linear growth.

I’m one of the organizers with Women of Color Speak Out—a group of women of color who came together during last year’s sHell No! Campaign when Royal Dutch Shell’s Polar Pioneer arctic oil rig was parked in Port of Seattle. As direct action activists, we recognized that the solutions to the climate crisis are not going to come from those who do not understand the current climate impact for the front line communities and communities of color. A year later, and we’ve given countless presentations to our communities and allies about capitalism, colonial empire, racism, prison industrial complex, patriarchy, and how these systems of oppression are connected to climate change. By elevating our own voices, we have created a platform to share our truths. Our reality may be labeled as radical; however, we are building from the shoulders and backs of those that came before us. The legacy of Yuri Kochiyama and Grace Lee Boggs allows for my Taiwanese immigrant voice to exist.

The Failure of White “Environmentalism”

For the past 50 years, U.S. environmentalism has failed to create an environmental policy while the “movement” has managed to make itself irrelevant to the general public, especially to the people of color. With the dominant environmentalism narrative controlled by white cisgender male, their narrow focuses on downstream individualistic solutions and the fossil fuel industry exclude communities of color that are trying to thrive in a system created by colonialism and patriarchy. Aside from food justice, which is primarily led by the social justice community, environmentalism is the only movement that is not intersectional. It does not intersect with the local Black Lives Matter group, queer and transgender community, or social justice issues. Rather, the movement focuses on creating bridges between education, government, and businesses. It focuses on working within the existing capitalism structure instead of challenging the upstream governmental policies and systems that allowed climate change to occur.

The end result is minimal change with no climate policy.

First, the movement produces endless articles, books, and documentary films based in science. Science synthesizes nature’s complex essence into text and numbers; thus, the debate remains in our heads, in the realm of scientific data and technical solutions. For my friends not part of this narrative of “environmentalism,” they don’t feel qualified to engage in conversations unless they feel well informed—even though climate change is a global dialogue that intersects with many social justice issues.

Secondly, this focus on numbers externalizes these climate issues into theories and global south issues. In Naomi Klein’s This Changes Everything movie, she highlights China’s shark-fin market and a community of color that later transitioned their economy to ecotourism. It is easy to highlight issues in other countries while not challenging our corporations and government policies that allowed for climate change. Aside from a brief mention of Monsanto in her film, there’s no discussion about our nation’s meat consuming diet and food industrial complex as the number one causes of climate change.

Furthermore, the environmental message focuses on achievable low hanging fruit changes that have the most minimal impact on existing lifestyle as possible. In lowering expectations, we have ineffective bi-partisan policies like No Child Left Inside, a policy that allocated $1 million for one white man’s job and bureaucratic grant funding that is inaccessible to communities of color. The movement sets a low achievable goal rather than pushing for higher standards and systematic change. During Earth Month, the most common campaigns are those urging to reduce individual plastic consumptions and recycling habits. These individualistic solutions for habit change and downstream reactive responses never addresses what allowed climate change to occur in the first place.

Lastly, these narratives do not recognize the reality in genocide and cultural genocide of the first people and indigenous communities. The original stewards of this land, The First Nations were “environmentalists” long before this movement was formed. They have witnessed the destruction caused by our infrastructure, such as the massive dams of the 20th century that created pools of salmon blood when salmons were unable to travel to their traditional spawning grounds. With our historical amnesia, we have forgotten the stories of this land and the importance of indigenous communities deep connected with Mother Earth.

Real Allyship in a time of Climate Crisis

During a 2015 Bioneers conference, Indian-American author & racial justice activist Rinku Sen said: “People of color are not too busy for the environment but we are too busy for bullshit.”

If environmentalists truly want to save endangered species and humankind, let’s start by renaming the “environmentalism” movement as anti-extinctionism to shift the framework from savior to surviving the mistakes of our past. Until institutional and organizational power shifts from white cisgender male to those most marginalized: indigenous, women of color, and people of color; this movement will remain irrelevant. These white-led non-profit industrial complexes are a hindrance to grassroots-led efforts by absorbing resources and continuing to perpetuate these existing systems of oppression. Allyship requires white-led organizations to develop a robust racial analysis, reinforce progressive stack, and be accountable to communities of color.

Before you generously offer your fiscal donations to these million dollar non-profit organizations, ask them these following questions: How are they supporting people of color lead efforts? How many people of color in upper management do they employ (not just unpaid internships)? How are they supporting a just transition to green energy? How do they support direct actions? Particularly how are they planning to support Break Free in May? These questions will help to ensure that non-profit organizations and government institutions are accountable to communities most affected. Another option is directly supporting Community Support Organizers. Backbone Campaign, a local non-profit that supported sHell No! kayaktivists trainings, currently has two CSOs with more launching this year.

With five hundred years of colonization, decolonizing systems of oppression will take long term commitment of practice to internalize change. One of Women of Color Speak Out’s Rules of Engagement is to be mindful and only debrief with communities that share your similar heritage. Caucusing with your ethnic group will eliminate perpetuation of trauma. Ultimately, it is important to pause and reflect how we are perpetuating these systems of oppression.