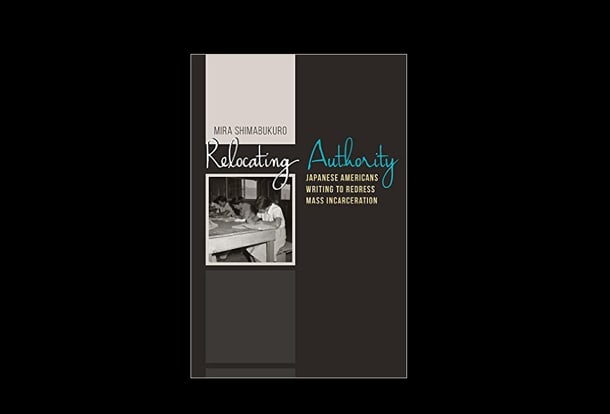 Mako, Alice, and I are eating at Papaya Vietnamese Cafe in The Landing. Mako sets aside half of his banh mi sandwich that he had ordered, to get it wrapped to take home; he puts the half he is eating into his mouth when I ask him, “Do you want to get some ice cream?”

He answers in a mono/dialogue as he breaks down whether it is okay to have some ice cream, because it is “okay to eat some food that’s not good for me, but only sometimes.” But he wants to be taller than his friend and he knows that he won’t get taller if he eats unhealthy food. He goes on for about a minute, maybe longer, then finishes the banh mi half that he has in his hands.

All that I can think about is that I once knew a little 5-year-old girl who could break down a simple question, analyze it like Mako (my grandson) did and make a decision. I wonder what she’s doing now?

After reading my daughter Mira Shimabukuro’s recently published Relocating Authority: Japanese Americans Writing to Redress Mass Incarceration, I realized that the little 5-year-old girl was collecting information, gathering knowledge of what’s happening around her, “practicing” analysis, trying to put 2+2 together, and maybe see if 2+3 made sense also.

But clearly for her following 35+ years, she was absorbing all she was observing, reading, and hearing (and also not hearing) in order to create a thought-provoking book about Resistance, Justice, Culture, Community Narrative and us. It was released in the last week of last year.

(Spoiler alert! Spoiler alert! For those who don’t want to know the ending of an academic book before you read it yourself, stop reading this now) Relocating Authority is ostensibly about Resistance writing by incarcerees in the WWII American concentration camps.

But it is not ‘just’ an academic book. It is also a well-crafted look at words and meanings, an analysis of earlier (self) stereotyping of Japanese Americans by JA writers and sociologists, and false narratives of the incarcerated population.

She has stories within stories and interpretations of words based upon stories written by novelists, and expressions of resistance and heartbreak by poets. Mira gleans thoughts not only from rhetoricians, but scholars of history, philosophy, art, literature, and education and just about everyone else. She uses (and credits) what she’s learned from her very multicultural community of friends, elders, relatives, and teachers.

Her major sources are community-based, Densho.org, an online resource based in Seattle, the Japanese American National Museum in Los Angeles, and her own observations and memories of real, live events in her life: Portland’s First Day of Remembrance, building the exhibit for Wing Luke Museum’s “EO 9066: 50 Years Before and 50 years After,” Pacific Citizen and International Examiner discussions, performing in Nobuko Miyamoto’s production, and much more.

Given the depth and breadth of the book, I wondered how she managed to compress it in a meaningful way, for both scholars and community folks, because that was obviously the point. Maybe I just don’t have the words in my arsenal. So I’ll just take a page out of Mira’s book. Figuratively, that is. The following is not a direct quote from the book but Mira uses a rhetorical device that runs throughout the book:

This is a story about the (public and private) resistance in American concentration camps.

This is a story about the rhetoric of the resisters.

This is a story about restorative justice.

This is a story about community building and rebuilding.

This is a story about Mira Chieko.

This is a story about us.