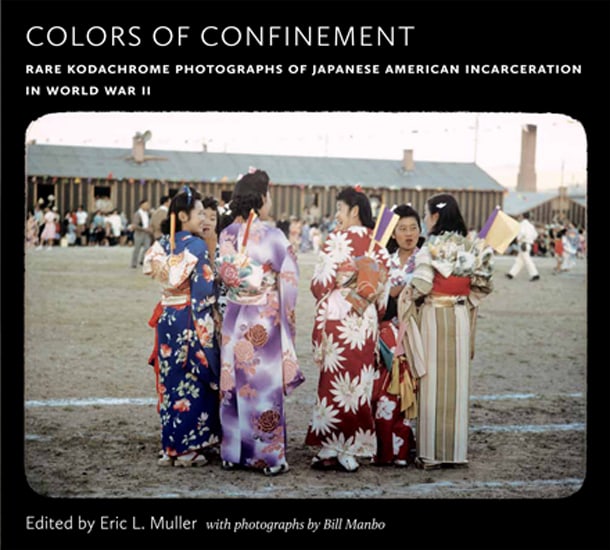 For many, the image of the Japanese American incarceration during WWII is largely a monochromatic and distant world in black and white. But a new collection of color photographs, Colors of Confinement: Rare Kodachrome Photographs of Japanese Incarceration in World War II, has changed all that, and opens a window into a family deeply affected by the experience. These photographs in the vivid colors of Kodachrome, the most famous photographic films, are perhaps like none ever seen—vibrant and full of life.

Amateur photographer Bill Manbo was a second generation Nisei, married, and with a three-year-old. In this collection, there is a variety of photographs of his wife, child, and in-laws, his model car and airplane hobby activities, colorful camp events, including Boy Scouts, Bon Odori, and Sumo events. Mando was like every father whose passion was photography.

While the photographs of incarceree Bill Manbo will certainly woo, Colors of Confinement is much more than just a photo album. Editor Eric L. Muller has taken great care to pair these photographs with several well-written and insightful essays that illuminate, and tell the stories behind the images. Each essay’s author is uniquely qualified, and each adds a new facet to a gem of a book.

Jasmine Alinder, an expert on the photographs from the incarceration camps, contributes “Camera in Camp: Bill Manbo’s Vernacular Scenes of Heart Mountain.” Not only does she clarify the role of cameras in the various incarceration camps, but also what the photos tell us. She compares Manbo’s images with other photographs, including Dorothea Lange, Ansel Adams, Toyo Miyatake, and WRA (the incarceration administration) official photos, not in terms of quality, but how the various perspectives tell different stories.

Lon Kurashige’s “Unexected Views of the Internment” adds perspective on the complex role of the WRA played as a supporter of both mainstream activities, such as the Boy Scouts, and ethnically centered ones, such as Bon Odori (Japanese dance festival), and what Manbo’s photos reveal.

“A Youngster’s Life behind Barbed Wire,” by Bacon Sakatani fills out the story of the many photos of the photographer’s young son. Unlike him, Sakatani was old enough to remember details, but still young enough to offer a child’s perspective on camp life and its many activities.

As good as these essays are, Eric Muller’s “Outside the Frame: Bill Manbo’s Color Photographs in Context” stands out. Bill Manbo’s family story is woven into the larger story of the incarceration of 120,00 Japanese Americans. So well written, it keeps those familiar with the facts and story engaged, while skillfully informing those who are not.

Enhanced with rare details and figures, the real value of Muller’s essay is to make the incarceration story personal by showing the toll it had one family. This family’s suffering was tragic, as exemplified by the story of Manbo’s in-laws returning home after the war.

This account is heart wrenching, as the family had been fleeced by a trusted caretaker of their land.

By digging deep into archival records, Muller sheds incredible light on the story behind the photos. For instance, the actual answers that Bill Manbo and his wife Mary wrote to the infamous “loyalty” questions 27 and 28 are especially revealing. The latter question was egregiously troublesome, asking these Americans to “forswear any allegiance to the Emperor of Japan,” assuming a preexisting allegiance.

The Manbos’ outspoken answers, especially Mary’s, show the raw anger of injustice, a frustration intensified by being parents in their 30s, considerably older than the average Nisei age of 17. Those answers did get them both in trouble and could have landed them among the 434 deemed “disloyal,” and who were transferred from their camp to the infamous Tule Lake center.

So the very attractive Mary Manbo shown in these serene family photos, was not just another pretty face and a quiet American Japanese—there is courage within and much more than meets the eye, and we are privy to it.

Equally strong as a photographic record and as a narrative, Colors of Confinement is a revelation which is greater than the sum of its parts.