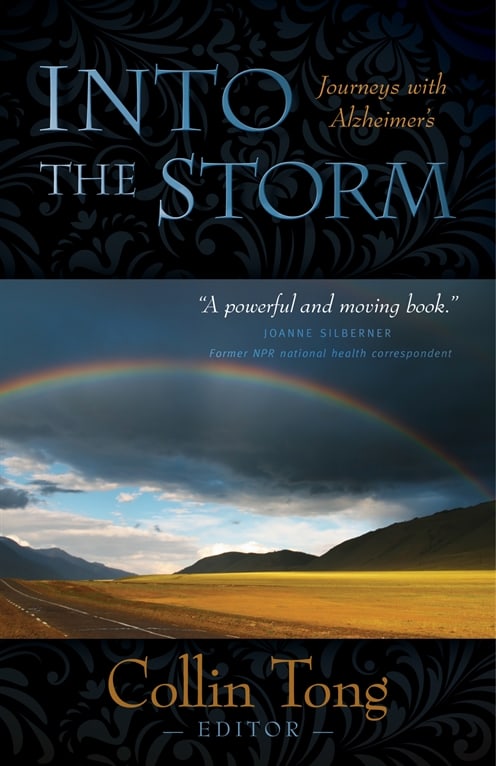 For journalist Collin Tong, the release of his book, Into the Storm: Journeys with Alzheimer’s, has marked a turning point in the nearly two-decade journey toward closure. The book, for which Collin is the editor, is an anthology of 23 stories by writers, journalists, educators, health practitioners, clergy, and other family caregivers who traveled similar paths in their time caring for loved ones with Alzheimer’s disease and dementia.

The book begins with Collin’s own story as caregiver for his late wife, Linda, who began showing signs of short-term memory in 1999. She was stricken with younger-onset Alzheimer’s disease at 51. Collin is able to share the initial feelings of helplessness, and denial, that came in their relationship as the disease progressed. The amount of pressure and energy spent by caregivers Collin describes is immense. Collin would spend 15 years as Linda’s caregiver before her death.

It was at an Alzheimer’s support group that Collin began to see how much healing other people’s stories could provide—which would eventually form the basis of the anthology.

The International Examiner caught up with Collin to talk about the recent release of Into the Storm.

International Examiner: In the last few months, you’ve been able to reach a lot of people while promoting your book and let caregivers around the country know that they are not alone. Have there been any responses from people that you’d like to share?

Collin Tong: Yes, I’ve received many responses from readers throughout the country. One came from a Seattle attorney who recently attended my Elliott Bay Book Company talk. He found the stories in my book resonated with his own experience: “In my work as a family law attorney and mediator, I listen to stories every day from clients who are in the midst of challenging journeys as they move through complicated transitions in their relationships. As a coach for caregivers of those with dementia, I listen to stories from individuals caught in the unplanned and unexpected reality of being a care partner to a loved one with Alzheimer’s and related dementias. Telling our stories creates a golden bridge that links us to each other and allows our shared humanity to emerge. In this lies the opportunity for transition and renewal.”

Another was a retired clergyman and psychology professor in Pittsburgh, Pennsylvania who coauthored a book about Alzheimer’s disease. He posted this note on his blog: “I have made contact with Collin Tong, whose book, Into the Storm, was so powerful, I could not put it down. Twenty-three writers from across the United States share their stories as caregivers for persons with Alzheimer’s disease and dementia. He writes that the demands of 24/7 caregiving means ‘one’s own physical and emotional well-being is often given short shrift.’ I have seen all too often that the caregiver ‘gives out’ before the loved ones they are caring for. This book needs to be read by all who are affected by this disease, which robs loved ones of their identity.”

IE: You mentioned that you hoped this book would have something for everyone. What do you hope Asian Pacific Islanders take away from this book?

Tong: In compiling these stories, I sought to bring together a broad and diverse cross-section of caregivers from throughout the country. More than 5.2 million Americans are living with Alzheimer’s disease and it has become the third leading cause of death in Washington State.

My hope is that these stories will be helpful for caregivers regardless of their ethnic or cultural backgrounds. In recent months, I’ve spoken at many public forums, community organizations, and social service groups. Next month, I’ll be speaking at First Chinese Baptist Church, my home congregation in San Francisco.

My hope is that families who are caring for loved ones with Alzheimer’s and other dementias will find helpful ideas for being more effective caregivers. The most important take-away is the understanding that it really takes a village to be a caregiver. It’s virtually impossible to do it alone. We need our community, families, and friends.

For me, the Alzheimer’s Association was an essential part of that support system. They provided care consultation, including assistance with placing Linda in an adult family home. Through the Association I learned about Elderhealth Northwest [now called Full Life], an adult day health center for people with dementia. I also joined an Alzheimer’s Association early-onset caregivers support group, which proved to be a real lifesaver.

IE: I imagine the release of this book continues to contribute to your own healing process. Can you describe what it means to you to be able to share such intimate thoughts and details of your experience as a caregiver? Have you learned anything further in retrospect?

Tong: Sharing my own caregiving story has provided some helpful emotional closure for me. It was a long 15-year journey from the time my wife was diagnosed with early-onset Alzheimer’s to her death three years ago. Because Alzheimer’s disease has now become such a public health epidemic in our country, I wrote the book as a service to other caregivers and am committed to doing more public outreach and advocacy on behalf the Alzheimer’s Association in the coming year. I’m donating 90 percent of the royalties from the book sales to an endowed memorial scholarship fund that I’ve established in Linda’s memory at the University of Redlands, my alma mater in California.

IE: Do you still keep in close contact with your group of caregivers?

Tong: Yes, I’ve kept in touch with a number of my former Alzheimer’s support group members. I attended the group for over five years, and many of those members have become lifelong friends.

IE: What’s in store for you in the future?

Tong: Although I retired from my job as communications director at Washington State University several years ago, I serve on several nonprofit boards and plan to continue my work as a health correspondent for Crosscut News and other publications in the near future.

Collin Tong was a staff writer and longtime contributor for the International Examiner.