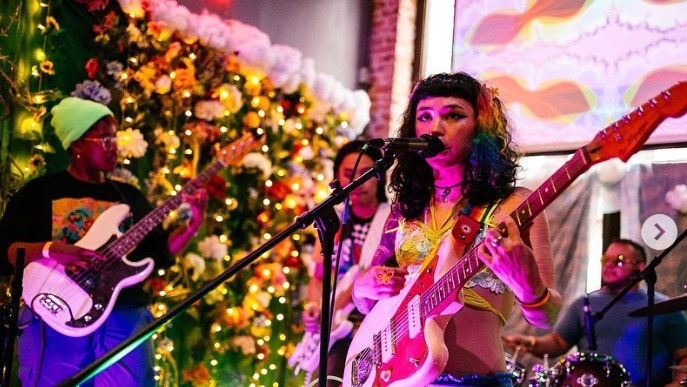 Indie-pop musical group SuperCoze has sprung onto the Seattle scene of late, and Cody Choi is the artist behind the band name. After playing a recent show at Café Racer as part of the So Dreamy Music Festival on June 4 and 5, Choi has a lot of new plans in the works.

Choi is a biracial queer non-binary musician whose earliest musical memory is learning how to play “Twinkle Twinkle Little Star” on the piano. “My mom is Korean and piano lessons were a part of her childhood that she didn’t enjoy as much as her siblings did,” Choi said, “but I always liked having the piano around the house because of that.”

After playing around with their grandmother’s piano and mother’s Yamaha keyboard, Choi expanded to other instruments. “My friends from school wanted to play the talent show when I was in the fourth grade, and they needed a bass player so I offered to fill that spot,” Choi recalled. “My mom was glad that I found a thing to occupy my time after school with since she worked late, and I remember going to Kennelly Keys to get a Fender Squier bass guitar, my first and still only bass I own to this day.”

Choi studied at Guitar Village in north Seattle with David Osuna. “I also joined School of Rock in 2010 after seeing an ad for it in the back of The Stranger,” Choi reported. “I took lessons there and performed in its after-school program for a few years, until I quit shortly after the relocation from Lake City Way to Greenwood, as the diversity of the students as well as the teachers changed a lot after its relocation and I didn’t feel like I fit in anymore.”

Choi has long been a self-starter. “Everything else I’ve taught myself or learned from YouTube, such as the ukulele, guitar some drums and other random instruments,” they said. “The first song I wrote as SuperCoze was a song on the ukulele called ‘Write Your Wrongs,’ and I don’t currently play it live anymore but would be interested in bringing it back!”

In SuperCoze, Choi combines singing, songwriting and improv. “To me, improv and songwriting go hand in hand,” Choi said, “and when I go to write something, I press record on my phone and improv over guitar or whatever music I’m singing to and from that I can find the melody and structure. To do all of that without any of the other parts would feel unnatural.”

Flexibility is one of Choi’s hallmarks. “I would like to try some other writing styles eventually, but for now I love using improv to write music,” they said. “It takes a lot of the pressure off of any creativity I want to try when recording, to know I can get whatever is in my head out and go from there.”

Choi raved about the recent experience of playing in the So Dreamy Music Festival. “We decorated the entire venue with fake plants and Christmas lights to create a fairy theme all around as well as made fake clouds from stuffing and it all came together really well,” Choi described. “I performed with my band, which featured six members total and was the largest band line-up SuperCoze has done to date!”

This illustrated for Choi how perseverance can lead to a big payoff. “It was really fun to be on stage with all of my friends and to play an event that I had originally started in my living room,” Choi said. “I learned that if you prepare enough ahead of time and seek out help from others, you can make magic really happen!”

And SuperCoze’s horizons appear to only be expanding. “Currently, I have a show booked for the summer and a few festivals lined up to play at,” Choi said, “as well as beginning to get into organizing events for others, and I’m excited for the future!”

So far, the hints are a bit cryptic. “I also will be working with a few organizations that I don’t think I can say much yet about yet,” Choi alluded, “but really excited to be asked to be a part of the local scene on more platforms because of the recent work that I’ve done!”

But amongst all these performances and events, Choi is committed to not neglect creative work. “I’ll also be working on writing more material,” they said, “and plan to release a new single by the end of the summer.”