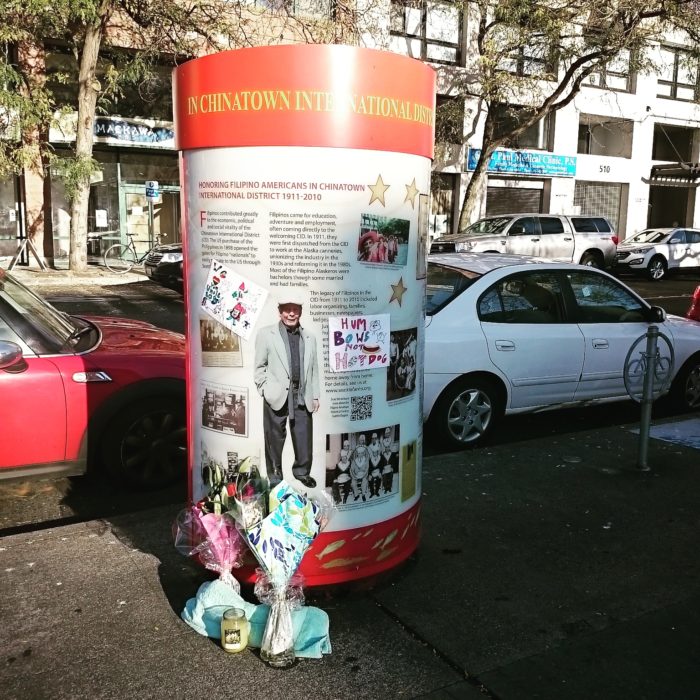 Many people are concerned that Filipino history in the Chinatown International District (CID) is being systematically erased and stifled. A few individuals admit they are trying to prevent the term “Filipino Town” from being recognized and taught about as a historic enclave within the CID. Others fell somewhere in between. Altogether, more than 20 people met at Hing Hay Coworks on June 14 to discuss, and perhaps come up with solutions to promote inclusion in the neighborhood. But the meeting quickly erupted into arguments over historical facts and terminology.

“There has been a consistent, targeted discrimination happening toward Filipinos on a regular basis,” said Devin Cabanilla, a public historian and former Board Secretary for the Filipino American National Historical Society (FANHS) Seattle Chapter, who organized the meeting.

The meeting was contentious the minute it started, when Cabanilla began referencing removal of Filipino history.

“Stop right there,” said Paul Wu, a retired architect who led design of the Historic Chinatown Gate. Wu said he wanted to counter “insinuations” against Betty Lau, a retired ESL teacher present at the meeting.
In July 2017, Lau successfully petitioned the City Council to cross out references to “historic Manilatown” from a resolution aimed at equitable development in the neighborhood. Before it was removed, the resolution mentioned Manilatown alongside Chinatown, Japantown and Little Saigon. After pushback from Filipino community members and supporters organized by Cabanilla— a group known as the Filipino Town Coalition—Council President Bruce Harrell apologized, and the Council approved an amended resolution recognizing “Filipino Town” as a historic neighborhood in the CID (the favored term over “Manilatown”).

Lau was at the meeting to share her perspective. Before she spoke, Cabanilla responded to Wu’s interjection, immediately detailing several examples, some on public record, of concerted efforts to erase reference to Filipino Town. These included the efforts of Lau, as well as Brien Chow, to strike reference to Manilatown from the resolution. Another was Lau and Chow asking the Wing Luke Museum to exclude historic Filipino Town from its educational programming (something Chow admitted to later in the meeting). Cabanilla said a Seattle Police Department employee told him that they’d been instructed not to teach about Filipino history.

In an email spreading the word about the meeting, Cabanilla detailed a third incident. According to Cabanilla’s email, a petition opposing a planned Filipino Memorial Parklet on Maynard Ave South, between King and Weller streets, was circulated among local businesses. The petition claimed the parklet would get in the way of businesses and lion dances, and would be bad Feng Shui. Michael Le, one of the owners of Go Poke restaurant who also attended the meeting, told Cabanilla he was approached by two men who claimed “the government was taking away parking on the street.” When he learned what the petition was actually about, Le withdrew his support.

Lau spoke for less than five minutes. “I inadvertently, I guess, started everything,” she said. She said she was there to “speak my truth” and dispel “painful” rumors.

Lau also made this assertion in an email in May, arguing that it would not be accurate for flyers distributed in the neighborhood to reference historic Filipino Town. Cabanilla was added into the email conversation, and the meeting was arranged after the email exchange.

In her email, to support her claim, Lau quoted from FIlipino first-hand accounts that referenced “Chinatown” or “Seattle” but not Filipino Town. She also quoted from the Filipino kiosk on 6th and King St., which reads that “the CID is considered by Filipinos as their home away from home.”

In his lengthy rebuttal email to Lau, also sent to City employees, urban planners, developers and local non profits, Cabanilla noted that for almost a year, the City has recognized historic Filipino Town after the amended resolution was passed. Furthermore, he said several historians supported his work to recognize historic Filipino Town, including Dr. Dawn Mabalon of Stanford University, a prominent historian of Filipino American history. In addition, “Filipino Town” was referenced in the National Register of Historic Places when the CID neighborhood was added in 1986. And historical data also shows a high density of Filipino activity concentrated in Chinatown, Cabanilla wrote.

Cabanilla noted in the email that Filipino presence in the neighborhood was often ignored. “However, people and groups change in understanding,” he wrote. “We do know Filipino community was a de facto presence concentrated in the Seattle CID, so we will form its collective meaning as “Filipino Town”. This is an acceptable change of terminology that brings clarity and underlines the reality of a truly International District.”

As for Cordova — who was Cabanilla’s uncle — Cabanilla wrote: “The Cordovas are not the sole historical source for Filipino Americans,” and added that they have been open to discussing new understandings of history. Cabanilla added in the email, “It is strange Ms. Lau that you bring up Fred Cordova’s name, but not the names of local living people who worked on the actual resolutions or proclamations that have since been created for Filipino Town.”

At the meeting, Cabanilla said: “I can’t corroborate with my uncle anymore — he’s in the grave.”

Ten minutes into the meeting, Chow said he wanted to address “accusations” that Lau “didn’t like Filipinos, etc. etc.”

Cabanilla interjected that he never said this. “I said there is specific action being taken at the legislative level, at the department level….Why is it consistently Filipino items that are excluded from your requests? Because that is persistent, and it can be taken as prejudice.”

Frank Irigon, a Filipino American activist who advocated for CID and API concerns starting in the 70s, defended Lau and said it was important for the neighborhood to work together on funding for historic preservation and to compromise on projects such as the Filipino Memorial Parklet. “Knowing Betty, I know she meant no harm,” he said. “I myself was very flustered, not knowing what was going on even though I’d been involved with this district for over 40-something years.”

Filipino community leader Pio DeCano, who is a trustee for the Filipino American National Historical Society, also stressed the importance of overcoming divisions. He said one of the most crucial lessons of the civil rights movement locally was how Chinese, Japanese, Filipinos and effectively worked in coalition and for inclusion to achieve big goals.

Halfway through the meeting, Cabanilla tried to change the topic of conversation toward solutions to inclusion. But people continued to discuss the issue of Filipino Town, and the name “International District.”

Wu said that because he didn’t know of any Filipino businesses in the CID, creating a designation of FIlipino Town when there are no visible Filipino presence would be redundant. “The economic value of giving a name is for business vitality,” he said.

“And so is Manilatown,” someone interjected.

“Well I didn’t want to get into that,” Chow said.

Others argued that debating whether Filipino Town has a historical basis misses the point. “There’s more to place, geography, than something that’s put in some kind of legal, litigious paper,” said Lauri Young, secretary for the Filipino Community Center of Seattle. “There’s story. And we have all of that to share. If we work together, we can share that.”

Dr. Polo DeCano, Pio DeCano’s son, said: “To take away that history and that legacy because it doesn’t fit some variation of fact, or definition of what is fact, I think loses the spirit of what I think we’re all trying to accomplish.”

In an interview after the meeting, Cabanilla said he thought it went poorly. “We spent too much time talking about the past,” he said.

Cabanilla said he never expected Lau or Chow to say they were wrong at the meeting. The only reason he welcomed them to attend was to let other people hear their perspective. “I don’t think enough other people understand how regressive their ideas were, and so I’m just giving them a place to speak, not a place for us to reconcile,” Cabanilla said. “Because there’s no reconciliation with having such completely different truths.”