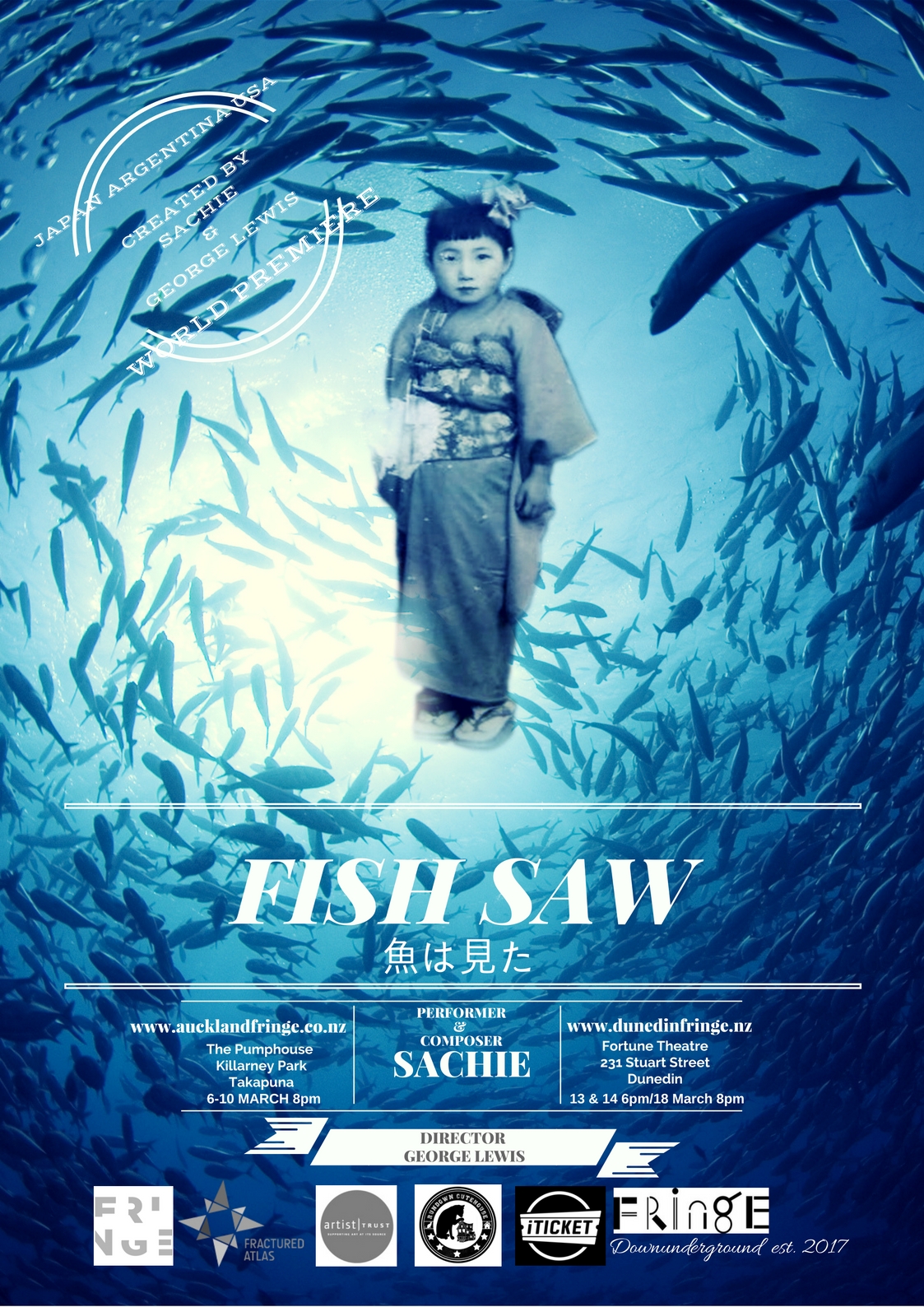 Sachie Mikawa is back in town, ready to show her newly-created show Fish Saw.

Mikawa, a clowning artist who hails from Japan and has lived in Seattle for over 15 years, took a break from the States in 2013, and spent some time down under in Australia. There, she played the role of the sidekick Egg to her partner Trent Baumann’s character The Birdmann, as part of his production company Downunderground.

While in Australia, Mikawa expanded her clowning work to include original music composition for Baumann’s vaudeville and clowning work. “What I most enjoyed in the past four years was traveling around the world,” Mikawa said. “We did shows in Edinburgh, where we were nominated for The Most Original Comedy.”

From there, she and Baumann circled the globe. “We did shows in a medieval town in Italy, in the desert of Alice Springs, and on an amazing beach in Surfers Paradise, Australia, and the beautiful Salamanca Market in Tasmania, to name a few,” she said. “We really enjoyed the Canadian circuit as well.”

Now she’s returning to present her latest work, Fish Saw, created with director and co-writer George Lewis. “It’s a very special show for me and George,” Mikawa said. “It’s the third original work we’ve made together in ten years. And it’s a very personal piece for me, as it is based on true stories of my mom’s family.”

Mikawa’s decision to create work based on her mother stemmed from her experience of the 2011 tsunami in Sendai, Japan. “My mom moved in with me when she lost everything in the 2011 tsunami,” Mikawa said. “We lived in my one-bedroom apartment on King Street for two years.”

During this time, Mikawa pondered ways of helping her mother adapt to this tragedy. “She’d lost many people she knew and was close to, but the death of a four-year-old girl, who was the daughter of my mom’s cousin, affected her the most,” Mikawa said. “Mom was going through the survivor’s guilt and it was very hard to see her deal with it everyday.”

But Mikawa began to have an idea. “Around that time I started having this image in my head where the dead girl and my mom, as a very young person, were meeting underwater,” she said. “The dead girl from the future would tell my mom, as a young girl, that everything is okay.”

The new idea grew slowly. “I kept that image in my head for a couple years along with a few more images and words, lines,” she said. “Fish Saw started from there.”

Working with George Lewis, Mikawa explored the complexity of these images. “George and I wanted to create something based on magical realism, and thought of animation that I could interact with onstage,” she said.

Mikawa reports that Fish Saw went through three phases of development, which each involved travel—since Lewis is based in Buenos Aires, but was also spending time in Seattle, all while Mikawa was based in Australia and touring extensively to perform, as well as to visit her mother.

The first phase involved getting thoughts out on paper. “We met six days a week and did writing everyday,” Mikawa said. “And lots of talking, about what happened to my family during and after the tsunami and about my mom’s family history, going back five or six generations.”

The second phase involved creating animations with artists Sandra Lîa Jurcovich and Andrea Torti.  But the show wasn’t quite finished. “I went back to Buenos Aires after that and worked another month, which was a great blessing because the show changed a lot after I went back there for the second time,” Mikawa said. “Things that weren’t as clear before I left suddenly revealed themselves to us. Toward the end of the process, I added sound and music to the animation and the rest of the show.”

Despite Mikawa’s original desire to heal her mother through this show, she reports that her mother has not seen Fish Saw. “She has seen the posters and newspaper covers with me on them and articles that I had sent, but because of her dementia, each time she sees them, it’s a complete surprise to her,” Mikawa said.

She reports that her connection with her mother is somewhat in limbo. “The biggest thing that happened to my family after the 2011 Tsunami was that my mom stopped living,” she said. “She had always been hard-working and recovered after each tragedy, but not this time. She stopped working, cooking. She used to own a restaurant, so this was a big deal. She is now living with dementia.”

Despite her mother’s condition and her penchant for world travel, Mikawa finds that national boundaries interfere with her caretaking. “When she moved in with me in Seattle,” Mikawa said, “she said she wanted to have the option of living in the United States, so I became naturalized in order to apply for her green card. But after waiting for two years for the green card in a foreign land, she really missed Japan and decided to go home.”

This decision created the initial divide. “Since Japan doesn’t allow dual citizenship, I could only visit for up to 90 days even though I was born and raised there,” Mikawa said. “And my mom had overstayed in the U.S. while waiting for the green card, so she can’t come back to the U.S. So that’s pretty screwed up for both of us.”

Although this situation is part of what keeps Mikawa on the move, she focuses on the positive aspects of her travels. “I had a couple festivals in New Zealand where Fish Saw was to debut,” she said. “But then a couple weeks before the festival, I found out my mom was very ill, so I flew back to Japan for a month and a half to take care of her.”

The timing was coincidental. “I ended up being there for the sixth anniversary of the 2011 Tsunami, but in the Japanese calendar, it’s considered the seventh, which is very important when counting death anniversaries, so it was special,” she said. “Seeing mom in the state she was in then, and spending time with her in that particular time, really affected what eventually became the final version of the show.”

Although she has no current plans to move back to Seattle permanently, Mikawa is looking forward to her visit. “I’m so excited to bring the show to Seattle,” she said. “A lot of friends helped me make this show via Kickstarter, and I finally get to share it with them.”