On November 1, Seattle-based grassroots group Got Green held a Climate Justice Forum to discuss how communities of color will be disproportionately impacted by climate change. Held in South Seattle, the forum was hosted in collaboration with the City of Seattle Office of Sustainability and Environment.

“The purpose was to … have discussions about the direct impact on communities of color and move people to action,” said Jill Mangaliman, executive director of Got Green, whose mission is to ensure that low-income people and communities of color in Seattle and King County can gain equal access to green jobs, healthy food, energy efficient and healthy homes, and quality public transportation.

Several speakers at the forum spoke about the global, international, and regional impacts of climate change. Many suggested that while climate change may be a catastrophe, it can also turn into an opportunity to balance out the dynamics of power.

“You can put a coal plant in a mostly low income community of color and think that it will impact those folks more quickly but in the end it will affect everyone,” said Mo Avery, a youth organizer for Got Green who emcee’d the event. Avery stressed the importance of eliminating the idea of “sacrificial communities,” in which low income communities of color are placed in proximity of environmentally hazardous or degraded environments due to environmental racism.

Avery also described a tendency of city developers to enforce environmental goals on communities of color without involving the communities themselves. Avery said it’s important for communities to feel they “have control over these decisions.”

“Over and over again, there’s going to be mistrust when power, like government agencies, come in and try to set the tone for how communities should change, not knowing what’s already going on in those communities,” Avery said.

While it may be seem like people of color do not take part in the environmental movement, in which white people are most visibly seen as the movements’ leaders, communities of color are becoming more concerned about environmental issues, Mangaliman said.

According to a Green For All survey of 800 voters who identified as African American, Latino, and Asian, 75 percent said they are following new information about climate change issues more closely today. 75 percent also said they believe new carbon emission standards will not only keep costs down but, more importantly, create new industries with good-paying jobs. 68 percent said they believe climate change is an imminent issue Americans need to be worried about right now. This is higher than the general population’s national average.

Mangaliman said that people of color already play a big role in addressing climate change. Immigrant families, for example, already consume less, in the case of large family units who live out of a single home and share resources. Environmentally-sustainable values are “just built into our culture,” Mangaliman said.

Mangaliman also delivered a presentation on how climate change is affecting Seattle and what the city is doing about it. Mangaliman described rising sea levels and extreme weather as examples of climate change, and explained that South Seattle is disproportionately polluted because of a higher density of cars. Food security is poised to be an even bigger issue. With extreme weather and droughts in places like California, low-income people who have trouble accessing food currently will face even more barriers.

Nearly 100 attended the Climate Justice Forum. Many were inspired to action, particularly by a poem read by Marshallese poet Kathy Jetnil-Kijiner at the 2014 UN Climate Summit held in New York City.

An exerpt of the poem reads:

“mommy promises you
no one
will come and devour you
no greedy whale of a company sharking through political seas
no backwater bullying of businesses with broken morals
no blindfolded bureaucracies gonna push
this mother ocean over
the edge
no one’s drowning, baby
no one’s moving
no one’s losing
their homeland
no one’s gonna become
a climate change refugee
or should i say
no one else”

You can watch the full poem here

The forum served as a call to action for communities of color.

“This issue has the potential to change so much of what’s inequitable in our society and serve as a catalyzing force across race, class, and sexuality,” Avery said. 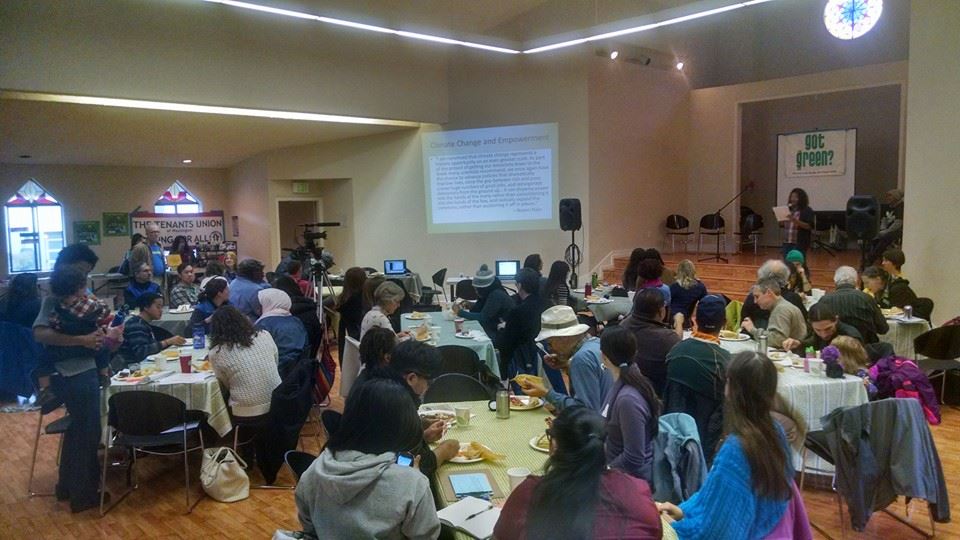