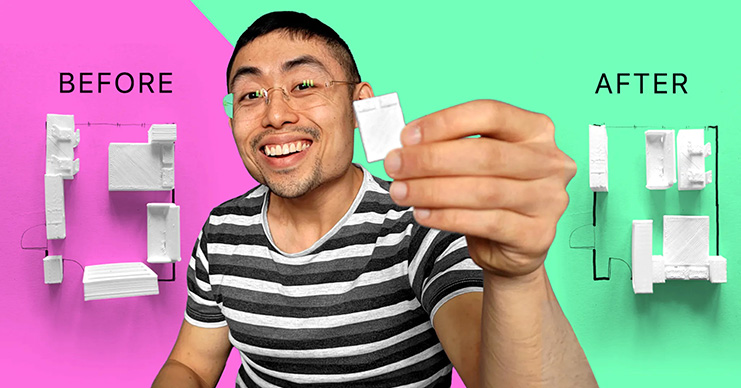 Architect Cliff Tan may be based in London, but his insights into architecture and design are available the world over, both on the website for his firm Dear Modern and in his podcasts. And that is exactly how Tan wants it.

It has become Tan’s goal to democratize the field of architecture and make architectural services available to all through his educational podcasts. “Traditionally, architects work for the rich to build houses and buildings for them,” Tan said. “I was part of this very standard way of working until I started offering advice on social media, just for fun.”

To Tan’s surprise, this advice garnered a lot of interest from individuals who may not have a project big enough to hire an architect, but who would like advice regarding a bedroom or small apartment. “Even ‘the everyday’ person appreciates design, and wants their spaces to look and feel nice,” Tan said. “I thought of creating an affordable consultation style service where people can ask an architect anything they liked, without commitment or a heavy contract, which benefits me the architect as well, because I too am not tied to a single client and am more able to help a greater number of people.”

Tan is thrilled that so many people are interested in a field that has captivated his attention all his life. “The most vivid memory was being fascinated by new skyscraper in Singapore, back in 1994, which meant I was just six years old,” he recalled. “I suppose when something comes to you at an age before you are able to think properly, it’s safe to say the intentions are as pure as they can be.”

Despite studying architecture in school, Tan reports that he learned his most important lessons in the field with developers, clients, and end users. “A building is just a means, whose ultimate aim is to make its inhabitants feel protected and happy,” he asserted. “This is why good design is not influenced by budget or appearance, but by the way it makes a person feel.”

In his practice, Tan focuses on feng shui and energy flow within rooms. “Feng shui, in a way, is architecture!” he claimed. “From the very beginning, feng shui has always been about optimizing the built environment.”

His goal is to clarify any misunderstandings about this concept. “I think often, people forget the roots of feng shui, sometimes comparing it to superstition, when actually it’s just very practical,” he said. “Its goal is to ensure that rooms tap into the environmental energies, such as sunlight, air, water, so that every space feels natural and has good flow.”

Tan’s podcasts aid in this effort. “This connection between feng shui and architecture becomes evident in my videos where I demonstrate the planning of spaces using its principles,” he explained, “and people can immediately see how much nicer a space feels.”

Before opening Dear Modern in 2016, Tan held a more typical position as an architect. “I used to work for a traditional architecture firm up until 2016, working on large commercial projects or high budget private residences,” he described. “However, being a naturally prudent, or even a stingy person, I cannot always align myself to the excesses of these large projects, especially when I am living in a tiny room or apartment myself.”

Freelancing gave Tan the opportunity to see other alternatives. “There were times where I had friends who needed help, and I did so on the side, planning and optimizing their similarly modest apartments that I felt a real sense of connection and satisfaction,” he said. “I started Dear Modern to give myself access to choose my own projects and clients on scales that are closer to home.”

To build his business, Tan used social media to find clients. “Now that I have access to a greater number of people, the struggle is coping with this need,” he said. “What we found is an entire untapped industry of people needing affordable, accessible architecture. A single firm like mine simply cannot cope with this vast demand.”

Despite the challenge of this overwhelming desire for Tan’s services, he strives to fulfill the need. “Ultimately, I hope to be able to expand on where I am now, so that we can help even more people make their homes and surrounding environments feel nice,” he said. “In feng shui, it is said that your environment affects the way you feel, which affects the way you perform, which ultimately affects your destiny.”

Tan believes it is those who live in small rooms or tiny flats who need this help more than anyone else. “I am just trying to level the playing field and give everyone access to good design,” he said, “and to help them feel nice in their own homes, which will almost certainly make them happier and more successful in whatever they do.”