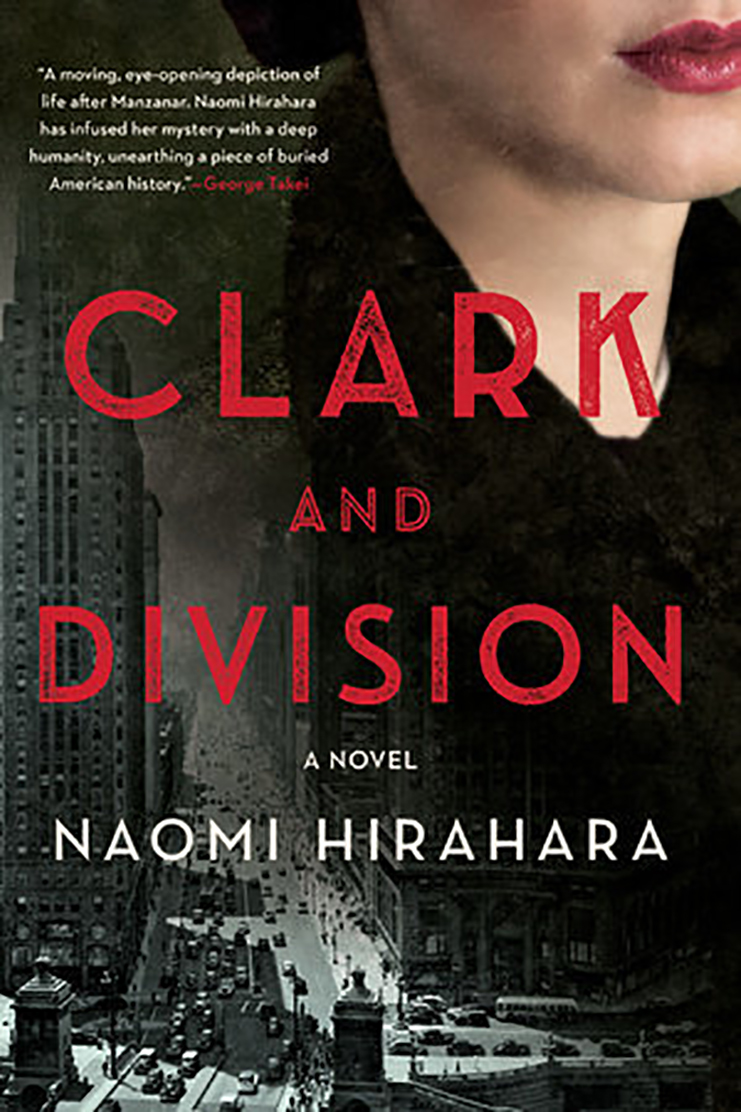 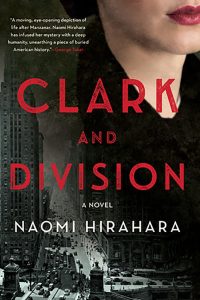 After camp, what was life like for Japanese Americans being released to the Midwest? Between the larger milestones of camp and redress history, there’s a chasm of decades—and often, of Nisei silence. In addition to scholars like Diane Fujino and Valerie Matsumoto, writer Naomi Hirahara began to document this time period with her co-authored nonfiction book Life After Manzanar (2018). Her highly anticipated novel, Clark and Division, is a wonderfully detailed and emotionally nuanced fictional dive into Nisei postwar life in Chicago. It’s also a compelling mystery novel, and though I eagerly read her entire Mas Arai series, Clark and Division may be one of my favorite Hirahara books.

In 1944, 22-old Aki Ito and her parents have just been released from Manzanar to begin life outside camp in Chicago. Just when they arrive, they receive word that her older sister Rose has been killed in a subway accident. Although the authorities rule Rose’s death a suicide, Aki does not accept this assessment about the death of her strong, optimistic older sister. Aki begins her own investigation of Rose’s death, ranging around Chicago from the titular Clark and Division subway station (and Japanese American neighborhood) to the Newberry Library to the different bars in the area.

As an unlikely detective and highly relatable “little sister,” Aki Ito grows into her sister’s clothes (literally) and out of her sister’s shadow. It’s a familiar portrayal of sister relationships—the younger one comparing herself to the older one, trying to take on the older sister’s roles in her absence. The novel’s opening image demonstrates the strength of the siblings’ bond, beginning from the very moment of Aki’s birth.

One of the novel’s greatest strengths, commented on by reviewers like Densho historian Brian Niiya, is the meticulous historical research. Hirahara (re)builds the novel’s world of 1944 Chicago through concrete details like business addresses, wartime posters in the subway station, the decor of the Newberry Library, and even wardrobe colors that Nisei women would not typically wear. However, it’s an equal testament to Hirahara’s skills as a novelist that the research does not read as a lecture or textbook. While some writers of historical fiction take great pains to show processes or details that are not crucial to the story; Hirahara only includes what she needs to portray this world.

I also appreciated the diversity of Issei and Nisei characters. There are Issei fathers who are bitter and turn to alcohol as a means of coping with camp, as well as Issei fathers who turn to woodworking and community service. Aki is skeptical of her older sister’s involvement with the Japanese American Citizens League during camp. It’s also instructive to see the difference in living and outlook between Aki’s family and her friend Art Nakasone’s family. The Ito family lives in a sparsely furnished apartment after their release from camp, eating primarily Japanese food. By contrast, the Nakasone family were never incarcerated; they live in a two-story house and eat foods like stroganoff as well as tsukemono.

Yet the most powerful aspect of the novel is the emotional nuance of being a young Nisei woman in this particular time and place. “There was no time for emotion,” Aki says, as she describes the packing and leaving for camp. “We had to cross an unknown body of water on a rickety rowboat. If we paused to cry or ask questions, we were bound to sink.” Aki frequently muses about life before and after camp. For example, there are some renewed freedoms (walking around with less surveillance), and some new restrictions (cemeteries are less likely to accept Japanese remains). Through Aki, Hirahara also points us behind the War Relocation Authority propaganda photos of smiling, polished Japanese Americans in camp. “I’ve seen those WRA photos,” she tells the Nakasone family over dinner. “They don’t show how we felt inside…None of us were going to give other Americans the satisfaction of seeing us look miserable.”

The novel also tackles difficult and rarely-discussed topics that would face a young Nisei woman, including sexual harassment, sexual assault and abortion. I had never heard about menstruation stopping for women during camp, but Aki describes it vividly: “Even though we didn’t voice our complaints out loud, our bodies knew the truth.”  I also appreciated Aki’s growing cross-racial consciousness and solidarity, developed through her relationship with her African American co-worker, Phyllis, who has a brother in the military overseas. “I had been so fixated on the Nisei soldiers,” she muses, “that I hadn’t even considered the situation for black soldiers.” These aspects add depth to Aki’s character and, by extension, they provide an incredibly useful window into the emotional landscape of Nisei women.

Though Hirahara describes this book as a standalone rather than in a series, I can’t help wishing for more books about resettlement from her, perhaps about the Nisei women who worked as domestic assistants after the war.  Overall, I found myself marveling at how the novel answered many questions that I didn’t even know I had in the first place. It’s a wonderful portrait of Japanese American resilience and struggle, showing readers just a slice of how difficult resettlement really was.

Author Naomi Hirahara will join Frank Abe in virtual conversation about Clark and Division through the Elliott Bay Book Company. August 16, 2021, at 6 PM.