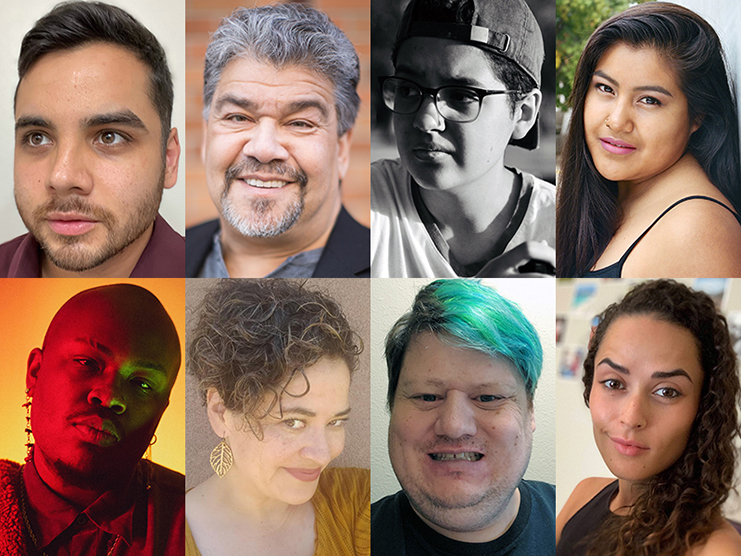 Every adult has spent their teenage years learning about who they are, and in Mercedes Floresislas’s play CJ, An Aspanglish Play, 15-year-old CJ is no different. First, she copes with her mother’s addiction, which leads to an overdose, and then must come to terms with the dementia experienced by her Deaf grandmother.

Floresislas reports that her own family experience was the catalyst for creating the character of CJ. “This play was partly inspired by my teenage daughter’s struggle,” she said, “to make sense of the meanness and lack of regard for the Otherized and for our planet that felt prevalent in the last four years of the last decade.”

But this could never be merely a private family matter in our politicized world. “Had it been her struggle alone, I’m sure therapy could have helped,” Floresislas said. “As a therapist and educator, I recognized that her peers also struggled with maneuvering the most important task at this age, identity formation.”

This journey detours CJ away from her regular life, as three Aztec deities transport her on a three-night adventure through Mictlan. “It is not quite the Aztec purgatory, nor the underworld, but rather the in-between,” Floresislas described. “It is the space where ego identity is shed, and we become pure energy once again.”

It is in Mictlan where CJ, mirroring the discoveries of Floresislas’s daughter, learns about both her history and her spirituality. “Not only my daughter, but my young clients and students, seemed to be having a premature midlife crisis,” said Floresislas.  “Who can someone aspire to become when one’s racial identity is vilified, or when one’s ethnic membership is measured by language proficiency?”

CJ, An Asplangish Play has received a lot of local support, particularly from local theatre company Pork Filled Players (PFP). “Our work on CJ began our of our Unleashed program, which develops works by POC playwrights,” said PFP executive director Roger Tang. “CJ is a member of the class of 2020, so to speak, but because it has specific demands, such as trilingual fluency and the needs for deep and frequent use of ASL interpreters, we decided to split CJ off from the rest of the Unleashed plays so we could give it full attention, and we pushed our public presentation off into 2021.”

Director Ana Maria Campoy has taken on the challenge of presenting this video-on-demand reading for PFP. “I love language and storytelling that expands my world,” Campoy said. “CJ battles some massive obstacles, both realistic and fantastical.”

Floresislas’s hope was to show, rather than lecture, her daughter and friends on how to navigate these obstacles. “I might not be able to lead the way of the journey her and her peers will travel,” she said, “I can remind them the richness of their culture and strength of not only her people, but humanity.”

This process has taken the playwright on a similar journey. “This play has gone through many revisions,” Floresislas reported, “but during 2020, as the world seemed to explode and implode, I sought to create a space where the pain of loss, sadness and gratitude could co-exist, but of course, it has always been there, Mictlan.”

Campoy finds this effort toward healing very timely. “It’s a play that demands us to be compassionate, to be generous, to be on fire for our fellow human beings, after this past year and a half of pandemic life,” she said. “You’re a living miracle. I’m a living miracle. We are here, now let’s work together to take better care of each other and our planet.”

To do this work, Campoy struggled with many pandemic-era challenges. “How do we tell a story in three, and sometimes four or five, with Nahuatl, the language of the Aztecs, and LSM, Mexican Sign Language, languages, and bring everyone along with us?” she described her dilemma. “How do we theatrically portray the epic actions of the play when we know people are watching on their computers or another small screen?”

Tang reports that this project, even though not a full live production, stretched PFP.  “The production has such specific needs, deaf actors, actors who speak Spanish, actors who could speak Spanish and sign, actors who can sign in ALS and Mexican Sign Language,” he elaborated. “We needed to broaden our reach and tap artists from across the continent. Our cast covers several different time zones!”

Through this project, Floresislas sees in PFP a role model for how theatres should engage with their communities. “My goal for this reading is simply to enjoy the feat that Pork Filled Productions, Ana Maria Campoy, Grecia Pardo, Kai Winchester, and the amazing dramaturg Melanie Queponds, who has been with me since the beginning of this play, have managed by making this reading possible,” she said. “Their sensitivity for access for our Deaf actors, their equity, representation, and culturally affirmative practices have taught me so much about what theater should be like for the next generation of theater artists.”

But this video reading of CJ isn’t the end for this story, as Ophelia’s Jump Theatre in Claremont, CA, will present a full production in November of 2021. “That will mark the sixth of seven shows since 2017,” Tang said, “that Pork Filled Players has developed into full production out of its Unleashed play development program for POC playwrights.”