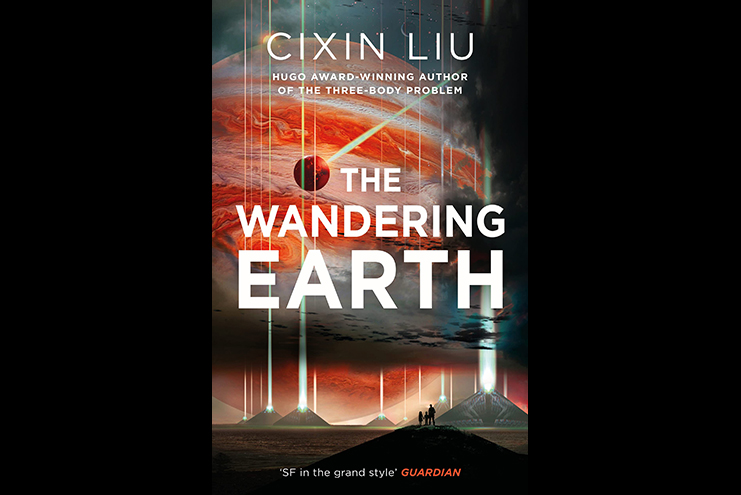 The Wandering Earth by Cixin Liu is a delightful anthology of short stories, all focused around the Earth, space, human nature, and both the past and future. As a collection of ten stories, for anyone looking for good science fiction stories, there is something for everyone held within.

The first short story is the titular “The Wandering Earth” itself. When humanity learns that the sun is destined to release a sudden burst of energy sooner than was originally predicted based on its age and star type, the world rushes to move the Earth away from the sun and deeper into space, in the hopes of protecting it from this event. This short story then follows what life on Earth is like as this traveling alters the environment and ecosystem, causing disasters below ground and freezing the surface.

The second story, “Mountain,” centers around the history of an alien race which has come to Earth in search of answers to the nature of the universe. Here we learn that these aliens, mechanical in nature though not artificially made, came from a world with a hollow core, and long thought that the universe was made of solid rock, with worlds being bubbles within them. A delightful piece of worldbuilding and alien history for anyone seeking such a story.

“Sun of China,” the third story in the anthology, follows Shui Wah as he travels to the city to make a career in the world. As he goes on, he finds himself promoted to bigger and better jobs, until he finally, thanks to his experience in cleaning skyscrapers, lands a job cleaning a massive space mirror, the titular China Sun. “Sun of China” explores what careers might be found and needed as humanity looks to the stars, and what role the common man might have in this future.

“For the Benefit of Mankind” follows an assassin named Smoothbore as he’s tasked by some of the richest people in the world to kill some of the poorest. As he plans his task, the story takes the reader through his life, showing us how he got to this point, and as the tale unfolds we learn just why he was given this job: a race of aliens has come to Earth, and intends to make mankind live in a colony in Australia. The rich fear that the aliens will force everyone to live as the poorest people do, and all of humankind will suffer as a result. Smoothbore speaks to one of the aliens, and we learn that the aliens themselves come from a planet where personal ownership was so sacred, that everyone on the planet save for one person was poor, and these aliens are those destitute individuals. A beautiful exploration on humanity and the cost of money, “For the Benefit of Mankind” cannot be recommended enough.

“Curse 5.0” seems to me to be a cautionary tale of the dangers posed as technology increases and more and more is controlled by computers and machines. The curse is a computer virus, initially programmed to harass a single man, but as the virus is edited, and as it gains more power through the increased digitization of the world, it truly becomes a curse worthy of myth.

“The Micro-Era” tells the story of an astronaut, the sole survivor, returning to Earth, only to find it inhabited by the descendants of those who stayed behind, tiny humans. After spending time among them, he is forced to decide what the future of the Earth should be.

“Devourer” was a personal favorite of mine. When a probe from another world comes to Earth, warning about imminent destruction, humankind must scramble to find a way to save their world. When the danger appears, it’s in the form of a saurian race, which means to harvest the Earth for resources, and means to take humankind aboard their ship for use as livestock.

“Taking Care of God” focuses on a race of aliens, the Gods of humanity, who come to Earth looking to be cared for. At first humans welcome them with open arms, happy to have their technology. But as people realize that they cannot use the technology, the Gods become seen more and more as a burden.

“With Her Eyes” and “Cannonball” seem to be set in the same universe, unlike most of the other stories in this anthology. In the first story, technology exists which allows for a person to share their eyes with an astronaut, allowing them to witness sights on Earth and go on vacation while in their spaceships. The narrator takes the eyes of a woman who wishes to see the flowers. It is revealed that this woman is not an astronaut, but is at the center of the earth, trapped. In the second story, the lead is woken from cryosleep and put on trial for the crimes of his son, who built a tunnel in the earth going to Antarctica. It is revealed the woman from “With Her Eyes” is his granddaughter.