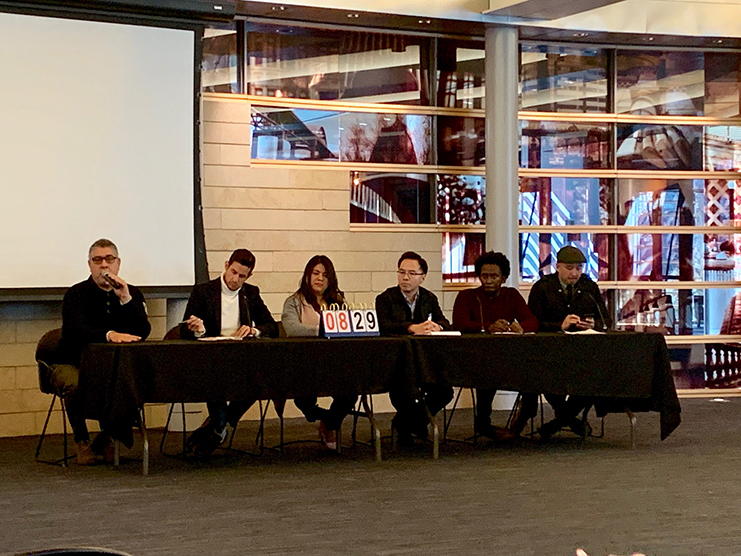 April 1, 2020, is Census Day. As written in the Constitution, the government gets only one chance every 10 years to count everybody living in the U.S. The results of the Census will determine who gets what share of more than $600 billion in federal funds for schools, health care and other programs – while also affecting how all are represented in government. This is why numerous local, state and federal government agencies and representatives as well as nonprofit organizations are saying it’s critical that all – no matter age, race, housing status or citizenship — are counted in the Census.

In March 2020, everybody living in the United States will start receiving letters instructing them to complete the Census on paper or online. The questionnaires will be translated into Chinese, Vietnamese, Tagalog, Korean and Japanese, and language guides will be provided in more than 50 languages

Outlining a positive vision about the Census was a theme of a Census 2020 Ethnic Media Briefing hosted by the City of Seattle and King County on Nov. 1.

“We are at a turning point in our country. We have the option to choose to be an inclusive and welcoming community where everyone matters,” said Seattle Deputy Mayor Shefali Ranganathan. “We are committed to making that choice, to making sure that everyone in our community counts.”

Ranganathan went on to describe how the Trump administration is working to make sure that certain groups are not fully counted, including communities of color, LGBTQ+ people and the homeless. The federal government also isn’t providing the resources to ensure “a complete, safe and fair Census count,” which means state and local governments have to pick up the slack.

The state legislature allocated $15 million for Census outreach, 90% of which is intended to be used at the grassroots level. Philanthropic partners are also offering $1.5 million in grants for community outreach through a Regional Census Fund — established by Seattle Foundation, King County and the Cities of Seattle, Bellevue, Kirkland and Redmond, and going to organizations doing outreach in King County — and a Washington Census Equity Fund — managed by Philanthropy Northwest and going to organizations and tribes across the state. API organizations that have been awarded funding include Asian Counseling and Referral Service, Chinese Information and Service Center,  Korean Community Service Center and more.

The Census Bureau is also looking to hire Census takers from within communities, so that the staff going door to door will look like the people they are trying to reach. To learn more, go to 2020census.gov.

The city is investing $50,000 in funding for ethnic media outreach for the Census. “Ethnic media locally is the most trusted media organization within the community. They have been serving their audiences for so many years… They are the best partners we can think of…” said Alvaro Guillen, a media specialist for the U.S. Census Bureau, on a panel of staff working on government efforts.

A second panel included participants representing community organizations, such as the Seattle Office of Immigrant & Refugee Affairs, Entre Hermanos and Ventures. Panelists encouraged media to emphasize the benefits of the Census, instead of continuing the narrative that there is fear around participating.

“People will not express their fear. They will slow walk. We want to get ahead of that so that… the first time they are sharing their concerns is with someone in the community who has the information to make sure they can trust the process,” said Kamau Chege, the director of the Washington Census Alliance, a statewide coalition of organizations serving communities of color. “The role of ethnic media is to shine the light and have a positive message and editorial vision.”

Jaqueline Garcia, the founder of Mujer al Volante, shared examples of what she says to her community when talking about the Census: “We ask, ‘Do you pay taxes’? They say, ‘Yes.’ ‘You already pay taxes. If you don’t fill out the Census, that money is going to another place. You want to get your money working for you in your city, in your town, in your state. Don’t let your money go anywhere else.’”

Stanley Tsao of Asian Pacific Islander Americans for Civic Empowerment (APACE), part of the Washington Census Alliance, spoke about the challenges of serving such a diverse community, which ranges in size and level of support.

“What is their story, what is this person doing, what are their motivation?” he continued after the panel. “I’m pretty confident that the bigger communities – because you have a lot of organizational support, government support, community support – are aware. But how can I get the information down to the smaller communities that don’t necessarily have a seat at the table and are not represented even within our community… how can we do more to tell their stories and then remind all of us to say ‘They are all of us.’ That is the additional burden of working in the AAPI community.”