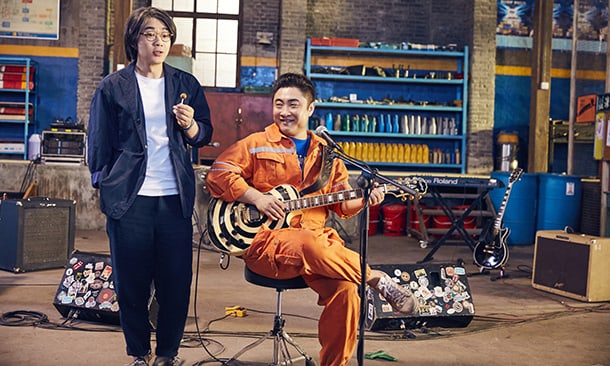 In the past 20 years, China has gone from releasing films mostly about the Cultural Revolution or the class struggles immediately following it, to lavish, upscale, Westernized productions. It’s hard to believe that a country with a Communist agenda could turn out something as visually energetic, contemporary, flashy and fun as City of Rock, but then time changes everything.

Hu Liang (Qiao Shan) is from small-town Ji’an. When he learns that Rock Park—a public square honoring a former rock-n-roll band named Broken Guitar with a giant guitar (think: Universal City Walk)—is being demolished by a developer, he’s determined to stop it.

But first, he has to gather musicians, form a band, and raise funds through a charity rock concert. All of that requires that he find an agent. So, he calls Cheng Gong (played by the film’s director, Da Peng), and begs for his attention. However, the agent remains unimpressed and out-of-reach. But, that doesn’t stop the shrieking Liang from bribing Gong with money he doesn’t have.

Once they meet, Liang also attempts to seduce Gong with outrageous flirtations. Evidently, a gay man trying to have sex with a straight guy is still a titillating concept in Northern China where this musical comedy takes place. Those scenes are supposed to make the audience guffaw, but they seem more dated than funny.

Soon, Gong gathers a motley crew made up of a shy drummer who plays with his back to the audience (Taiwan actor/drummer Li Hongqi); a beauty with a broken leg on bass (Uygur actress Gulnezer Bextiyar); an 8-year-old (Qu Junxi) whose father teaches her to play keyboards but whose mother forbids it while forcing her to practice martial arts; and, a 54 year-old physician (Han Tongsheng) who once played guitar for the aforementioned Broken Guitar. Together, the group makes mad music as they race to challenge the developer.

Although this fast-paced narrative is rollicking entertainment, some of its slapstick humor may be lost on Westerners. Further, its form of rock music isn’t the hardcore variety, although not quite the easy listening kind either. Overall, the music is like the film; glamorous and glittery in tone yet with a definite commercial timbre.

Still, considering that rock-n-roll is a musical form created by American Southern blacks, it’s mind-boggling to follow its trail through various adaptations all the way to today’s China.