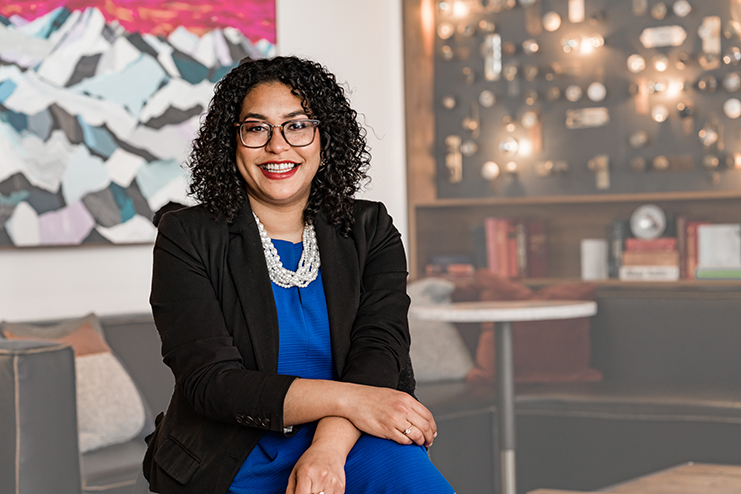 Brianna Thomas, chief of staff to Council President Lorena González, is running for Seattle City Council Position 9, representing the whole city. It’s the seat her boss González is leaving to run for mayor of Seattle.

Before working as a legislative aide for González, Thomas managed the successful campaign for a $15 dollar minimum wage in SeaTac, which was later implemented in Seattle. She also worked as a field director for the Washington Housing Alliance Action Fund, and managed the campaign for Honest Elections in 2015, which established publicly-funded elections in Seattle through Democracy Vouchers.

Thomas was a candidate for City Council District 1 in 2015, but did not advance past the primary.

Other candidates for the seat include Claire Grant, a master’s in public health candidate running to be the city’s youngest City Council member; Sara Nelson, co-owner of Fremont Brewing and a former City Council staffer; Nikkita Oliver, lawyer, community activist and executive director of Creative Justice; and Rebecca Williamson, a retail worker and member of the Socialist Workers Party.

If elected, Thomas wants to make the City Council’s work more transparent to citizens – “pulling the veil back a little bit and demystifying how we set budgets, how we pass legislation, what effective lobbying looks like,” she said.

Thomas grew up in a trailer park in Georgia. Her family depended on food stamps, and valued public service. Four generations of her family served in the military, her mother had her volunteering in soup kitchens every other Saturday starting when Thomas was five. “It was firmly rooted in my understanding that there’s always somebody that you can help,” she said.

She decided to work in local government after taking an introduction to politics class at the UW, and taking an internship in the state senate.

“It just clicked for me. There are already mechanisms in place to make sure that power lives where it’s supposed to, which is in the hands of the people,” she said.

Thomas loves campaigning. Her favorite part of it is doorbelling, which isn’t safe during the pandemic. Instead, she’s connecting with potential voters over the phone and holding virtual meet and greets.

“I love meeting people where they are, and I love reminding them that they already have the tools and mechanisms they need to change their worlds for the better,” she said.

In response to the increase in anti-Asian hate incidents locally and around the country, Thomas said government bodies like the City Council should promptly respond to community concerns, and focus on funding community organizations addressing hate and bias. “The worst thing that can happen is government shows up pretending that they know what’s going on on the street, and re-inventing what community has already created,” she said.

An example of government addressing community safety needs, Thomas said, was the Chinatown International District (CID) Public Safety Coordinator position, which was held by Sonny Nguyen from 2017 to 2019. Thomas helped craft the budget investment that led to the role while she was working in González’s office. South Park – another neighborhood whose residents are predominantly People of Color, and is vulnerable to hate crimes – now also has a public safety coordinator.

On housing policy in the CID, Thomas said the neighborhood needs more housing with multiple bedrooms, so that seniors can age in place and multigenerational families can live together – “so it’s not just flashy studio apartments with marble finishings for younger folks with more income.”

At City Hall, Thomas helped craft the the 2017 police accountability ordinance intended to strengthen civilian oversight of the department, and helped establish the Office of Inspector General in 2018.

Thomas was working for the Council in summer 2020, when protests against biased policing and systemic racism ignited, and in response, a majority of the City Council pledged to defund SPD by 50 percent. The final 2021 budget shifted funding from the department by closer to 20 percent.

On police reform, Thomas said the City Council is bound by certain constraints even as it tries to respond to community concerns.

“I think City Council is actually moving in the direction that community was hoping for, but unfortunately sometimes we have to move at the speed of government, and we’re not gonna be able to right these historic wrongs in a single budget cycle,” Thomas said. “I would plead the patience of community while we work as fast as we can – not to make excuses  for it, but there simply are some limitations on how quickly we can turn a ship.”

The Council is also researching the CAHOOTS model in Eugene, Oregon, in which social workers and unarmed police officers each respond to 911 calls, and the STAR program in Denver, which sends mental health specialists or paramedics on some 911 calls instead of police officers. “You don’t need a gun and a badge to respond to mental health crises,” or solve homelessness, Thomas said.

Thomas said a highlight achievement from the Council during her time there included passing secure scheduling rules for fast food workers, which took effect in 2017. The ordinance requires employers to provide work schedules two weeks in advance, among other labor protections. “That’s a real game-changer for most working families,” she said.

She also pointed to the first-in-the-nation Domestic Workers Bill of Rights in 2018, which mandated domestic workers be paid Seattle’s minimum wage, and have rest and meal breaks. Thomas is also proud of Seattle’s legal defense fund to protect immigrants from deportation or loss of legal status, which has helped hundreds of people locally.

“I like thinking about how to make somebody’s day better through policy, putting myself in their shoes and trying to see the whole picture,” said Thomas.

The Council could improve its ability to mutually collaborate. “I think governing is a team sport,” she said. “Nobody passes policy by themselves, nobody enacts legislation on their own or on an island.”

She also thinks the Council should be more methodical in ensuring that legislation can withstand a legal challenge. “I think sometimes in our enthusiasm to problem-solve, we move a little bit faster than we should.”

Thomas believes her experience in public service sets her apart from other candidates in the race. Her relationships with City departments, the clerk’s office, and understanding the legislative process will give her an edge, she said. “It’s all very wonky and a little bit nerdy, but that’s the job, and I’ve been training for that job for 11 years.”

ABOUT US
Since 1974, it has been the mission of the International Examiner to serve the Northwest’s Asian Pacific American communities by providing accurate, in-depth, timely, and sensitive coverage of issues which affect us.
Contact us: [email protected]aminer.org
FOLLOW US
© All Rights Reserved. Made with ♥ by drgdrp