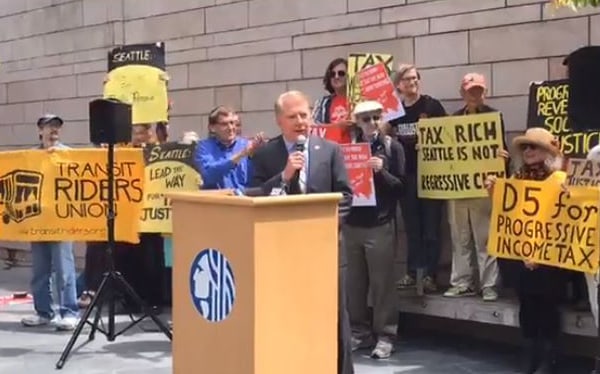 Anyone earning below these figures will not be affected.

The income tax is intended to allow the City to reduce some of the taxes it imposes which disproportionately take money away from low-income people — so-called regressive taxes, like the property tax.

The money raised by the tax will also go toward public services like housing, education, reduction of carbon emissions, and addressing the homelessness crisis, according to a statement from the City. It will also help pay for federal budget cuts from the Trump administration — cuts which would threaten Seattle’s funding for everything from basic services like transportation, housing and education, to scientific research at the UW and earthquake preparedness.

In a statement, Councilmember Lisa Herbold, who represents West Seattle and South Park’s District 1, said: “When our poorest households are paying 16% of their income in state and local taxes while our highest earners are paying only 2.4%, we have a very clear problem.  Today we are taking a step in the right direction, toward tax fairness.”

Washington is one of nine states without a broad income tax. The state’s tax system is considered the most regressive in the country — meaning it forces low-income people to pay more of their income in taxes. The activists who helped push through Seattle’s income tax hope it will be the beginning in reforming Washington state’s tax code, as Crosscut reports.

Though eight billionaires work in the Seattle area, only one one of them — Starbucks CEO Howard Schultz — actually lives in Seattle, as Seattle Times columnist Danny Westneat pointed out. This means the city won’t be getting anything in taxes from the substantial fortunes of Bill Gates, Jeff Bezos, Paul Allen, Steve Ballmer and the other billionaires.

The tax will will likely be challenged in court, but if it proceeds according to schedule, it will come into effect on January 1, 2018.